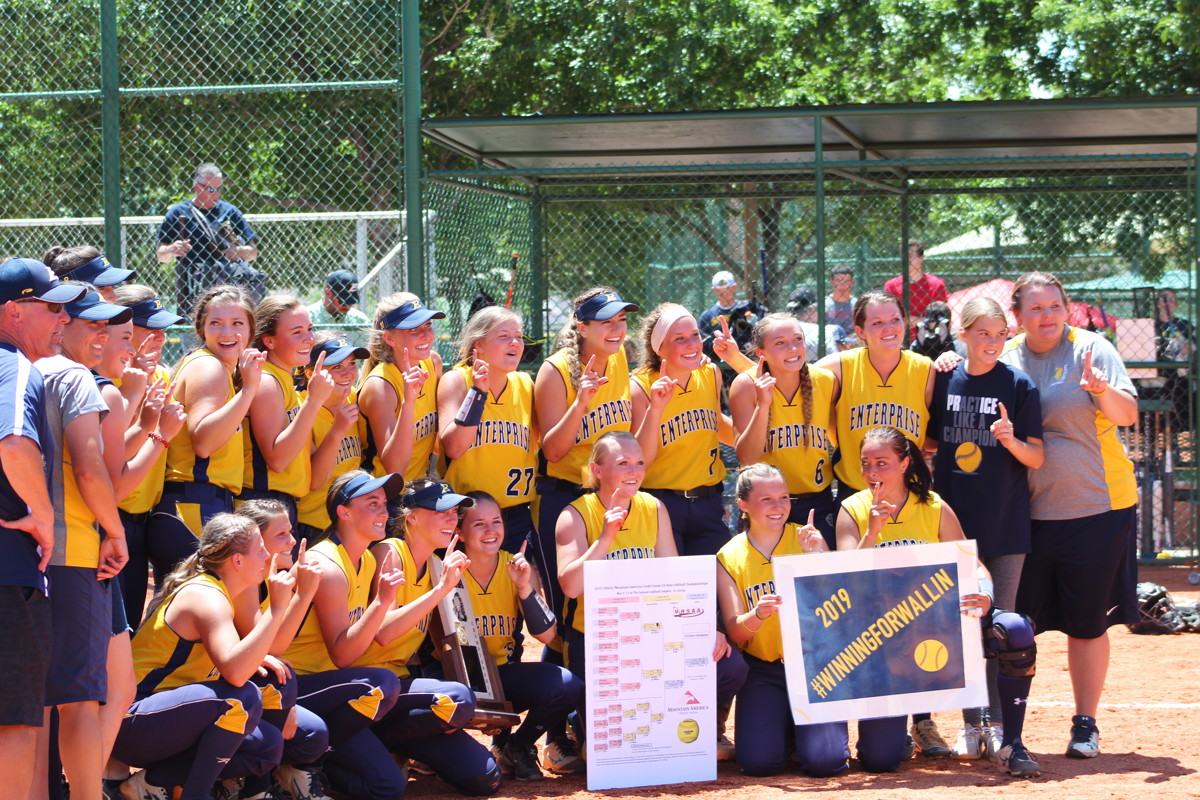 ST. GEORGE — Same two teams. Different result. Last year it was Enterprise climbing back from the one-loss bracket to face Gunnison Valley. The result was a 12-2 loss to the Bulldogs. And it would also turn out to be the last game coached by Enterprise head coach Duane Wallin, who died this past September.

Last year’s loss coupled with the loss of their head coach inspired the Wolves to dedicate each game this season to their former coach. After losing the initial two games of the season, the Wolves won 25 of their last 28 to finish 25-5. They dominated their class and beat higher-class playoff teams such as Mountain Crest, Desert Hills and Snow Canyon. The team motto all year has been “Winnin’ for Wallin.”

The Bulldogs struck first. In the top of the second inning Paige King led off with a triple to right field. Jaida King batted her in on the next pitch with a grounder to center field. McKaylyn Edwards then doubled to put runners on second and third with no outs. But pitcher Kangie Bundy got out of the inning with two infield groundouts and a strikeout to limit the damage.

The Wolves responded immediately. Ronnie Robinson led off the bottom of the inning with a line-drive double down the left-field line. Kindy Christensen then reached on a throwing error to put runners at the corners. Bundy then singled in Robinson with a pop fly to center to tie the score.

The next batter, Alaina Ramos, lined out to the shortstop. But in an effort to catch the runner at second base, Gunnison Valley made a throwing error allowing one run to score and putting courtesy runner Allie Hunt at third base. Hunt would score on Timorie Phelps‘ single to center field on the next at-bat.

GVHS third baseman Paige King initiated a double play on the next batter to get the Bulldogs out of the inning. But after two the Wolves led 3-1.

The score went unchanged until the top of the fifth. Tayler Brackett led the inning off with a double to left field. She was batted in by McKaylyn Edwards later in the inning. In the sixth the Bulldogs knotted the score. Jaida King singled to center field. She later scored on a fielding error to close the gap 3-3.

“I told the girls that it is a new ballgame now,” Enterprise coach Katye Jones said. “The score was tied. We have to do the little things to win the game.”

“Coach Jones told us to stay focused on our fundamentals,” Robinson said. “Continue to do the things we have been trained to do and we would be OK.”

The Wolves began the bottom of the sixth with three consecutive singles by Robinson, Christensen and Hunt to load the bases. Ramos then grounded into a fielder’s choice but that scored a run. Shaylee Reber then singled to left field to score Christensen. Phelps kept the rally going with a bunt single to load the bases. Dykell Jones then grounded out but still got the RBI as pinch runner Corrie Williams crossed home plate. The Bulldogs got the next batter to pop out but now looked at a 6-3 deficit. 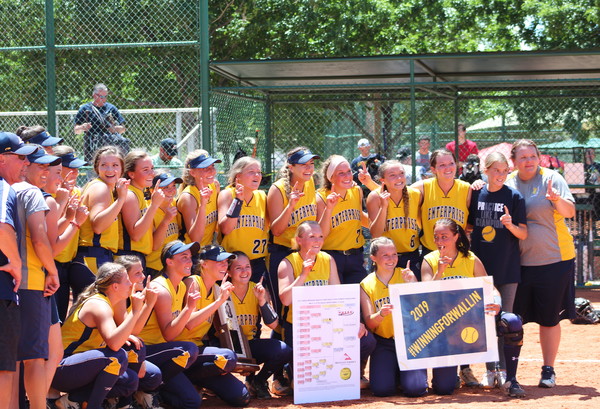 Gunnison Valley entered the game as the reigning champions and were not about to fold. Enterprise entered Allie Laub into the circle in relief of Bundy. Gunnison’s Kezzley Winn led off the inning with a hard-hit ground ball to short and reached on a fielding error. McKaylyn Edwards then drew a walk. Paige King then singled to right field to score a run. Jaida King followed that up with a laser shot to left field.

Enterprise’s left fielder Ramos sprinted back and made a great catch at the fence to rob King of the extra-base hit. It did result in the run, however, as McKaylyn Edwards tagged and made it home.

“Alaina Ramos made big plays in left field all game long,” Enterprise center fielder Robinson said. “Especially those two at the end of the game.”

GVHS’s Maddie Edwards then drew another walk to put runners at first and second with one out. Katelyn Cherry drew three straight balls before Jones called time to talk to her pitcher.

“We told Allie to get ahead in the count,” Jones said. “We told her to go after the batter and get an out.”

The next pitch was a strike, but more importantly, Wolves’ catcher Jessica Chambers picked off Maddie Edwards at first base after the pitch.

“That pickoff at first was huge,” Jones said. “Chambers saw an opportunity and made a great throw. That gave us two outs and took the pressure off Allie Laub in the circle.”

Cherry drew the walk on the next pitch but Laub got pinch hitter Quelsi Hiluis to hit a grounder back to her for the last out and the win.

Darren Cole is a graduate of Indiana University and Creighton Law School. He has been writing appellate briefs and legal memorandi for the past 25 years and has recently returned to his love of sportswriting.

Dota Underlords Season One kicks off with Battle Pass and more