At the Fool, we love to pick our individual stocks. But there’s also a good case to take a basket approach sometimes, buying stocks of several companies within the same industry. After all, one of the key determinants in how a stock performs can be attributable to its overall industry sector. That’s never been so apparent than over the past 10 years, as technology stocks have trounced the overall market while many other sectors have stagnated.

It appears technology still has a favorable path ahead of it, as 5G phones and infrastructure are just taking off and cloud computing continues to gain adoption, as do compute-intensive artificial intelligence applications.

It’s hard to find stocks that are well positioned to ride these tech trends while also being reasonably priced and paying a safe dividend. Yet the following stocks in the semiconductor equipment sector all do exactly that. 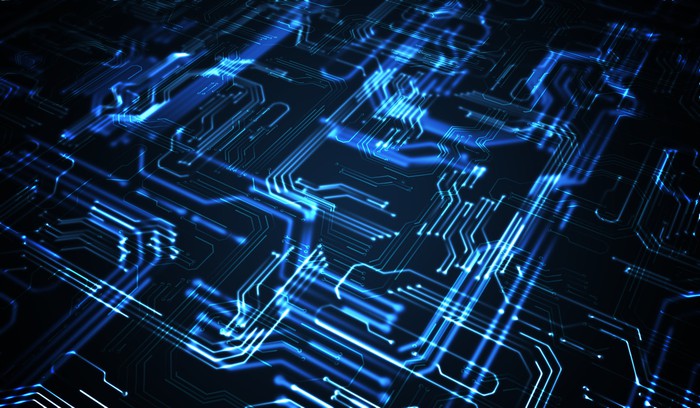 Semiconductor equipment companies are some of the best dividend growth stocks around. Image source: Getty Images.

U.S.-based companies Lam Research, Applied Materials, and KLA Corporation are three of the mere handful of companies that supply the semiconductor manufacturing industry. Each company has a diverse portfolio of machines and services, though Lam Research and Applied Materials tend to focus on etch and deposition equipment, while KLA focuses on process control equipment. With hundreds of process steps required to produce leading-edge chips, there’s a good amount of business available for each company.

Why do I like these companies today? Three main reasons. First, the semicap equipment industry has consolidated a great deal over the years, as prior semiconductor cycles have allowed the strongest companies to acquire competitors. Today, there are usually just a handful of machine options — and sometimes even one — at each step of the very complex process of semiconductor manufacturing. Each company also has a significant services business, which is mostly recurring and grows every year with the installed base.

This oligopoly also has very high barriers to entry. As semiconductor chips have gotten smaller and smaller, the technology to produce them has also become more difficult and exacting. So while China is actively looking to build its own semiconductor manufacturing sector by using these machines, there has not been any notable progress to date on building any sort of its own semiconductor equipment.

Finally, the sector looks relatively cheap today, even though it plays in the high-flying technology sector. That is nearly entirely due to the U.S.-China trade war, in which the U.S. has threatened to cut off sales of this equipment to certain Chinese manufacturers.

However, the demand slowdown caused by the trade war and pandemic early this year delayed these companies’ growth only temporarily. To remain competitive, chip companies want to be on the latest technology, and producing smaller and more powerful chips increases the need for these machines. Moreover, even if Chinese chipmakers are cut off, demand for advanced chips will still be there and find its way to other foundries.

Things could be turning up soon

As you can see, after a two-year consolidation, it appears these three companies’ revenue trajectories are now turning upward:

Before the administration announced it was considering banning equipment sales to China’s Semiconductor Manufacturing International Corp. (OTC:SMIC.Y), or SMIC, all three companies reported exceptional earnings and gave a very bullish view of customer ordering patterns into next year. While a SMIC ban may curb revenue in the near term, it’s unlikely to be a long-term trend.

Just this week, the world’s leading foundry, Taiwan Semiconductor Manufacturing (NYSE:TSM), reported extremely strong September monthly sales. According to an industry source and reported by DIGITIMES, the company is likely to announce an increase in capital expenditures, as demand for leading-edge 7 nanometer (nm) and 5nm chips is overwhelming capacity. Increased capital expenditures mean more sales to Lam, Applied, and KLA.

Finally, Joe Biden appears to have a solid lead in polls for the U.S. presidential election. While a new administration doesn’t guarantee restrictions to Chinese companies will be lifted, there is a possibility of friendlier relations overall. As it’s a large consumer of semiconductors, a more favorable relationship with China would likely be a plus for semiconductor stocks.

A rising yield combined with growth

While a dividend yield between 1.5% and 2% may not sound like much, these three companies are also buying back large amounts of stock, so their total shareholder return is higher. Additionally, all three companies should be raising their dividend every year for the foreseeable future, since their payout ratios are so low. Applied Materials raised its dividend 4.8% back in May, KLA hiked its dividend by 5.9% in August, and Lam just hiked its dividend an even 13% in September.

Investors who believe in long-term tech trends but are growing cautious about high-flying stocks in the software sector may wish to look at these semiconductor equipment companies, which appear to possess better value.

Intel Geospatial is a cloud platform for AI-powered imagery analytics