NEW YORK (CBSNewYork) – Three firefighters were hurt after a massive fire ripped through an auto body shop in the Bronx.

Making things tougher for them – the sweltering temperatures of Saturday’s heat wave. 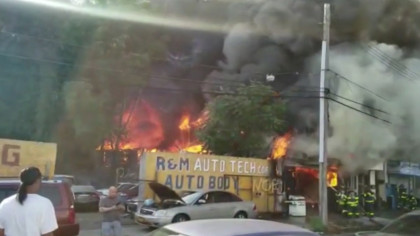 “It was hot, it was crazy… It was like three cars exploded, boom!” Eddie Nunez said.

“I saw flames, people screaming, a lot of smoke… I was scared,” Davonte Watson added.

Authorities told CBS2 things moved fast because firefighters had to be switched out frequently in the intensely hot weather.

Nearly 200 firefighters and 50 pieces of equipment were needed to get the blaze under control over two hours later.

Two of the three first responders who were injured are in serious but non-life-threatening condition.

Eventually most of the flames were put out and residents got a look at the extensive damage.

“I lost everything, no chance to grab something… I don’t know what to do,” Faranand Kere said.

“You gotta start all over again… It’s too much.”

Fire officials are still working to figure out what caused the blaze.

READ  2019 Subaru Ascent: This one feels at home away from home

What legacy will you leave? – Streetsblog St. Louis