Technology stocks aren’t exactly well known for their dividends. But due in large part to the chaos caused by the reaction to the coronavirus and what the pandemic has unleashed on the economy and stock markets, many are now paying out attractive yields — albeit offering less share price upside than some of their faster-moving peers. Such companies deserve attention though because they still provide valuable services and components behind the most powerful tech advances like mobility and cloud computing.

Three companies worth considering are Broadcom (NASDAQ:AVGO), Seagate Technology (NASDAQ:STX), and Corning (NYSE:GLW). Though long past high-growth mode, all three make up for that with big dividends and steady long-term business growth. 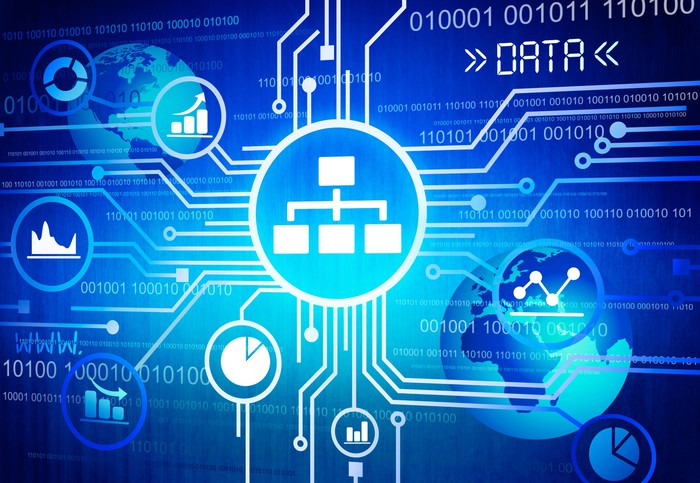 Semiconductor and network equipment maker Broadcom is a massive enterprise that has gotten bigger in recent years via acquisition. To strengthen its reach in data centers and related infrastructure, the company has started adding software to its repertoire through acquisitions. First were network infrastructure monitoring and management software outfits Brocade and CA Technologies, which were followed up with the takeover of Symantec’s — now NortonLifeLock‘s — enterprise security division in 2019.

The deals have helped Broadcom maintain growth during the last few years, even as its core chip and hardware solutions suffered through a slump along with the rest of the semiconductor industry. During its 2020 first quarter, revenue was up only 1% year over year, but free cash flow (what’s left after operating and capital expenses) increased 9% to $2.2 billion. That at least fulfills Broadcom’s reasons for taking on the software side of networking tasks, even if the outlook this year has become uncertain.

Still, the takeovers have left Broadcom with ample debt — $44.7 billion at the end of its last quarter, to be exact. While $6.4 billion in cash and equivalents gives the company liquidity to outlast disruption it may face during the coming economic downturn, managing liabilities is the real name of the game. Operating in a growth market in which mobility and cloud computing are increasingly important at least helps.

Shares are down 18% so far this year, making for an annual dividend yield of 5.1%. If Broadcom can come out the other side of the COVID-19 crisis with minimal damage — which, so far, it is showing signs of doing thanks to minimal disruption in its supply chain and resilient demand in China — this chipmaker should be a great long-term income stock.

Seagate Technology is a leading maker of hard disk drives (HDDs), which are used in everything from PCs and laptops to data centers to store large amounts of data. HDDs aren’t the latest and greatest in digital memory tech, but Seagate is still making advances with the legacy hardware while also dipping a toe into newer chip types like solid-state memory.

Much like Broadcom, Seagate was also dealing with a cyclical slump in sales before the coronavirus outbreak. Thus, management’s call for revenue to return to year-over-year growth in the current quarter could now be at risk. A pandemic is never ideally timed for anyone, but there’s some silver lining here for Seagate at least.

Demand for memory chips is a long-term trend, with smart devices and data centers expected to keep sales afloat for years to come. And since Seagate focuses on HDDs, the older and more affordable technology could be a welcome alternative as companies try to fulfill current needs in a digital-first world while balancing spending cuts. Thus, while the immediate future is uncertain, Seagate’s longer-term prospects are still good. Plus, this is a very profitable company. Even during the period of lean sales that started in late 2018 and extended through 2019, free cash flow was $1.2 billion, a free cash flow profit margin of 12%.

That’s more than enough to cover the current yield of 5.4%. The balance sheet was also in good shape, with $4.1 billion in debt and $1.7 billion in cash and equivalents. Put simply, this is a rock-solid tech income stock.

3. Corning: The technology behind all things glass

And finally, I’m picking Corning, the old glass and ceramics manufacturer. In recent years, its focus has been narrowed down to the highest-growth markets of this old science. Back in 2016, it sold off its 50% stake in the Dow Corning silicon business to Dow Chemical for $4.8 billion, purchased 3M‘s communications segment for $900 million in 2018, and made other smaller fiber-optic acquisitions along the way. This is a glass and materials manufacturer, but it’s one for the 21st century, focused on communications equipment, consumer electronics and autos, and medical equipment.

It hasn’t been smooth sailing, though. Corning is focused on high-end markets, but the manufacturing of some classes of products remains cyclical in nature. Sales were already starting to ebb, with 2019 revenue up only 2% — including a 7% year-over-year decline in Q4 2019. And free cash flow fell to just $44 million on the year as the company prioritized investments to set itself up for future growth. Thus, even before the market went to hell in a handbasket, Corning stock was in for a pullback.

And pull back it has. Shares are down more than 30% so far in 2020 alone, pushing the dividend yield up to 4.5%. And though earnings and profitability metrics don’t help much in valuing the stock after the anemic returns from last year — which could continue into 2020 given the current situation — the bottom line is fully expected to rally down the road. Besides having a hand in the making of smartphones, computers, and big-screen TVs, Corning is also building the equipment being used to deploy new 5G networks. That also includes a new indoor system that could help solve the problem 5G is having penetrating walls and other solid surfaces.

With a hand in the leading edge of mobility as well as other consumer electronics, this is a solid technology components manufacturer. Yes, 2020 could get rough, but the dividend yield could help bridge the gap.