4 New Electric Cars Coming To US Showrooms In 2019 – CleanTechnica 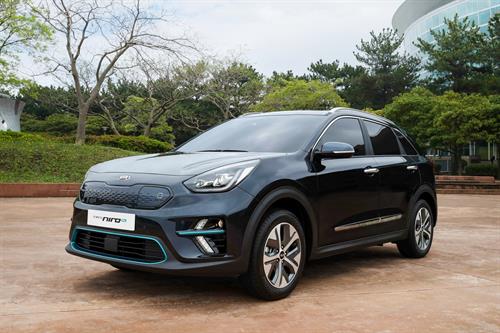 7 years after the Tesla Model S first went on sale, American drivers in all 50 states still have precious few battery electric automobiles with more than 200 miles of range to choose from. That will change in 2019 as new models from Jaguar, Audi, Hyundai, and Kia find their way into US showrooms. 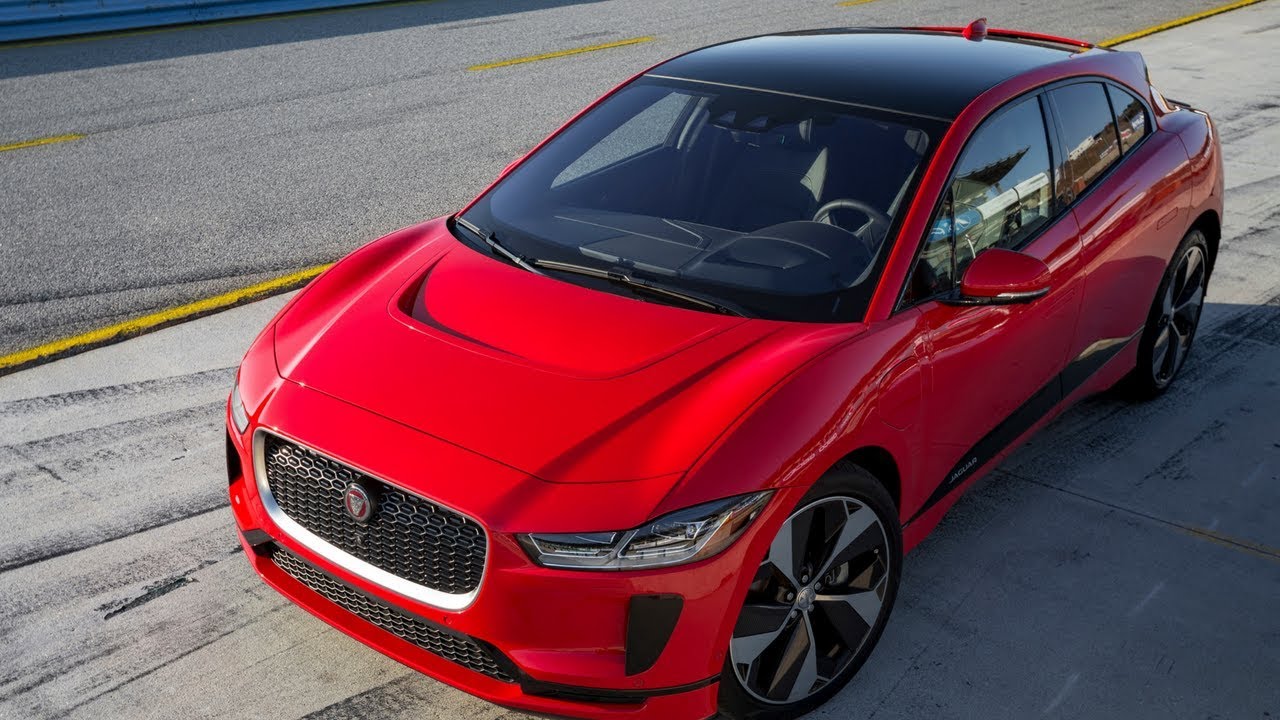 If styling sells cars, the Jaguar I-PACE should be a runaway success. The car is drop dead gorgeous in a way the original XK-E was back in 1963. We got a chance to drive one back in June of 2018 and it is a stunning car to pilot on twisty back roads. The I-PACE rewards its driver with lightning fast acceleration and cat quick reflexes, making getting there a joyous experience.

Dual motors give the car 4-wheel drive capability that is simply superior to any gasoline powered SUV on the market. Set the controls on the steering wheel and the I-PACE delivers just the right amount of torque to each wheel to manage uphill starts on slippery slopes without any sense of drama. It can also manage downhill slopes with similar ease. This is an electric car you really could take on the Rubicon Trail, assuming taking a $70,000 automobile off road is a smart thing to do.

If the I-PACE has any drawbacks, it is in the area of efficiency and electronics. The car manages only 2.6 miles per kilowatt hour, which requires more frequent stops for recharging than its 90 kWh battery might suggest. Some testers have also complained that its graphic interface is slow to load and clunky to operate.

But those criticisms only apply if your priorities are on electronic doodads. The I-PACE is a proper driver’s car as befits its Jaguar pedigree. It is available now at all US Jaguar dealers. 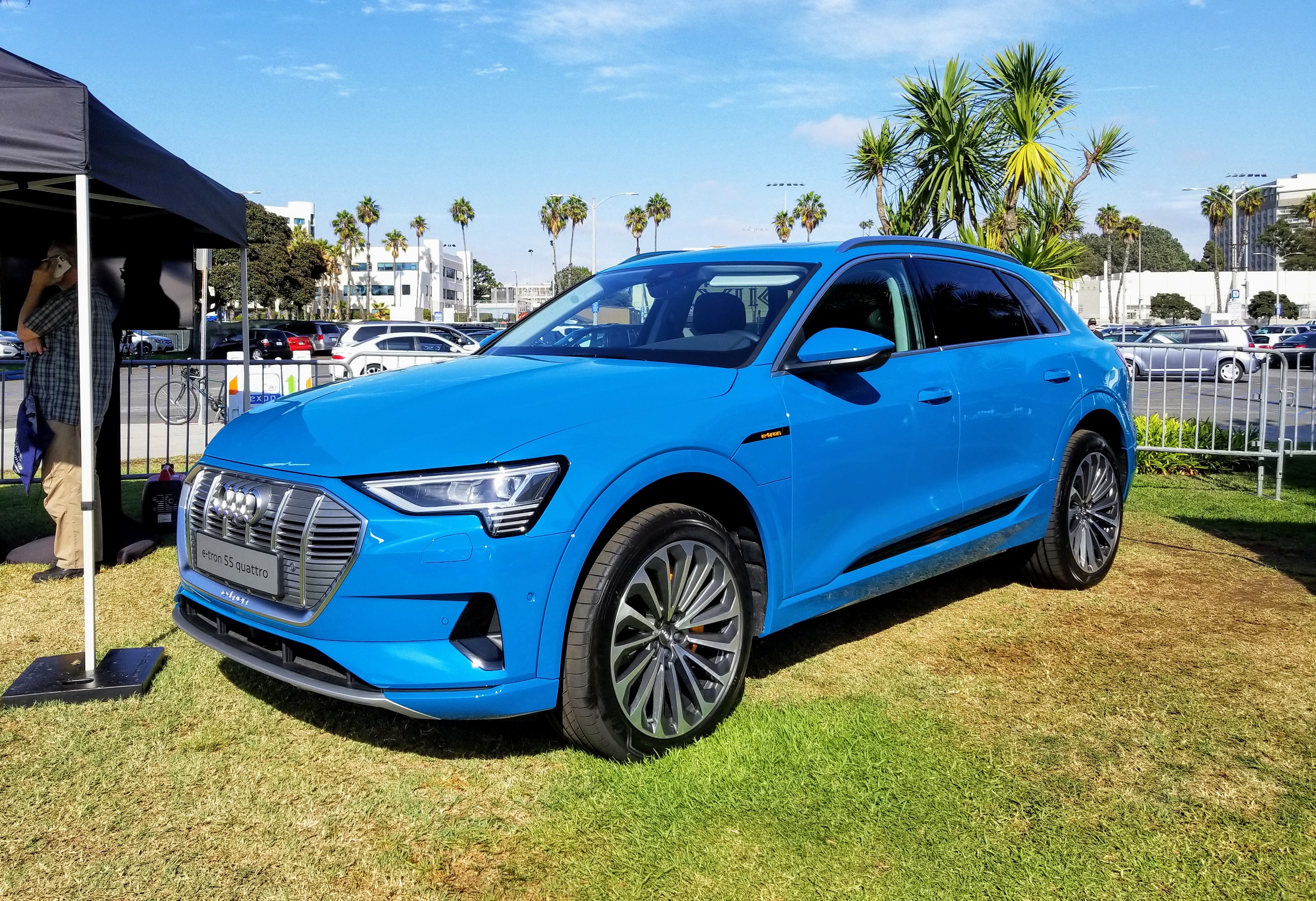 The dual motor e-tron from Audi isn’t quite here yet. It is expected in showrooms in “early 2019.” That probably means before the end of June in most areas. The dual motor e-tron may not be quite as quick off the line as the I-PACE, but it does have a 4,000 lb towing capacity, something the I-PACE lacks. It also can get an 80% battery recharge from a 15o kW DC fast charger in just 30 minutes.

Less scintillating in the styling department than the Jaguar, it is still a luxury electric SUV that will appeal to many drivers looking for a premium motoring experience. 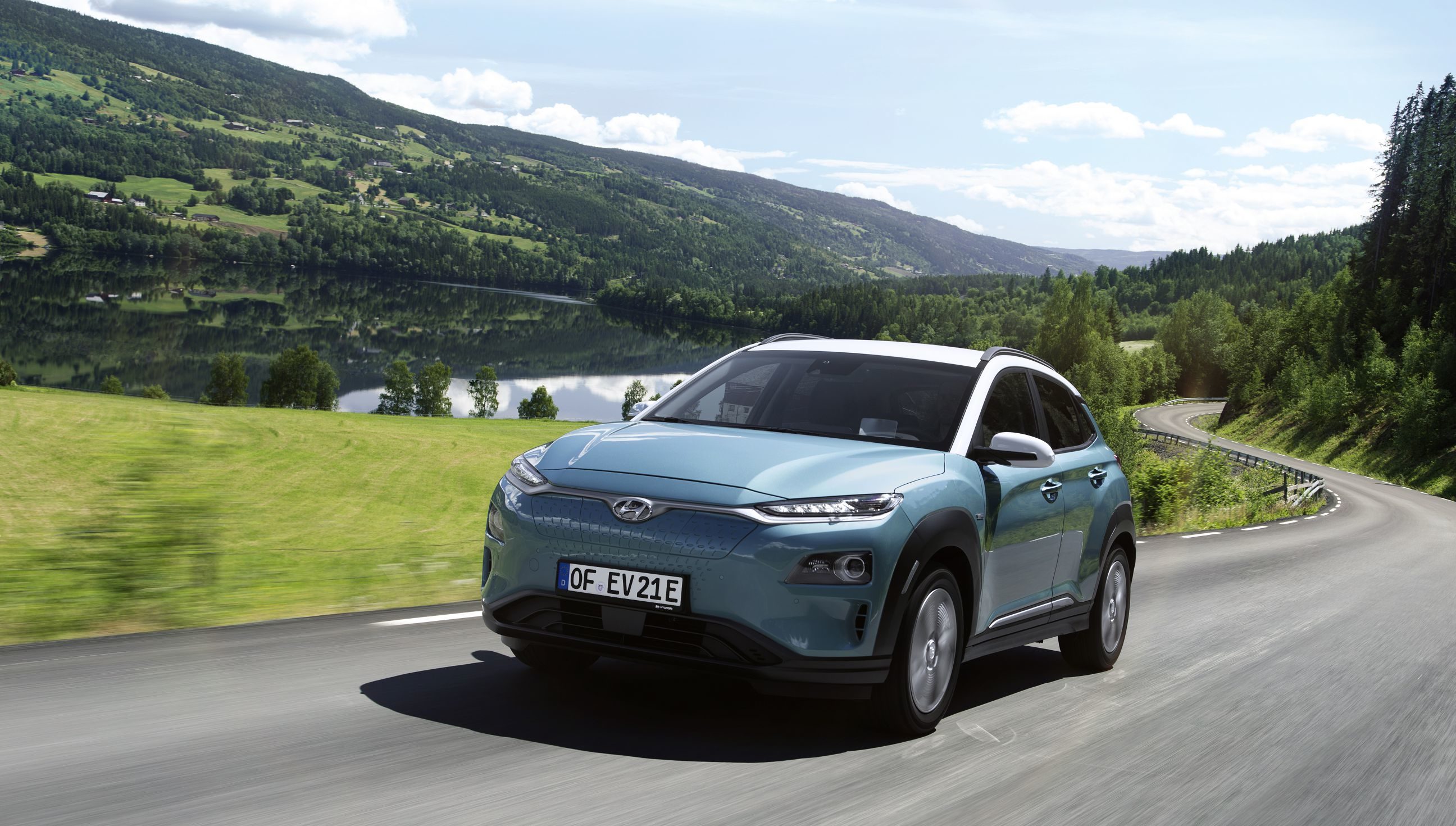 For those of us who are comfortable driving a car rather than a label, the Hyundai Kona Electric offers an all electric drivetrain with a single electric motor in an attractively styled crossover package. In addition to being visually appealing, it boasts one of the best efficiency ratings in the business — 4.03 miles per kilowatt hour. That is Tesla territory for a distinctly non-Tesla price. With its onboard 100 kW charger, it can get another 206 miles of driving in just 30 minutes from a CCS high power charger.

The lithium polymer battery pack it shares with the Kia Niro Electric is liquid cooled, which helps support such excellent charging performance. The Hyundai Ioniq Electric offers starts at $7,000 less but offers only 124 miles of range from its 28 kWh battery.

Due in late 2019, the Kia Niro Electric is the mechanical twin to the Kona. Dressed up in somewhat more sedate but still attractive styling, it is fractionally larger than the Kona, especially when it comes to front and rear leg room. Being taller and bigger than the Kona, its range is somewhat less but all the other important details are the same, particularly the onboard CCS Combo charging.

Neither the Hyundai nor the Kia rank as prestige automobiles, but the parent company deserves accolades for focusing on efficiency. The Niro Electric has the same range as the I-PACE with a battery 30% smaller. That’s impressive. 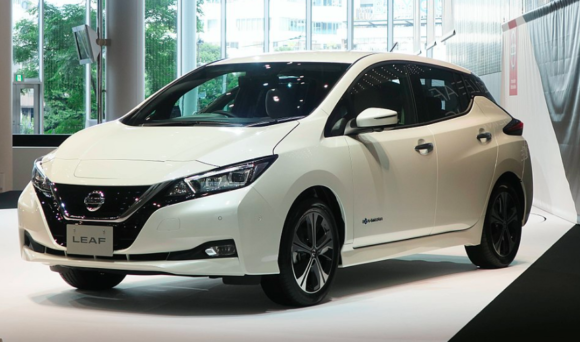 Plug In America points out one of the new electric cars Americans are not likely to see in 2019 is the Nissan LEAF with a larger 60 kWh battery. Nissan seems not to be able to get its act together when it comes to the LEAF. It stubbornly refuses to consider liquid cooling, relying instead on archaic atmospheric cooling. That’s OK for normal daily use and overnight charging, but it limits the car’s ability to charge quickly using high power equipment as the battery management system throttles charging power to prevent overheating.

The Hyundai Ioniq Electric is a great car by all accounts but its limited range means customers are ignoring it in favor of other products from the same company that offer longer range. Nissan chooses to ignore that lesson, however. When the LEAF will get a larger battery with greater range is unknown but the consensus is it won’t be any time soon. While other manufacturers are raising their game, Nissan is resting on its laurels, such as they are.

Another company that is underperforming in the electric car market is GM. The big news for 2019 is that the Chevy Volt will get an upgrade to a 7.2 kW onboard charger, but since it is scheduled to go out of production March 1, the announcement is hardly anything to get excited about.

Premium cars are wonderful things but cars for ordinary people are what will do the most good when it comes to moving the electric car revolution forward. On that basis, Hyundai and Kia deserve special mention for making affordable, efficient electric cars that are aimed squarely at the sweet spot of the new car market — crossover SUVs.

Volkswagen may have the first of its new ID branded electrics on the road by the end of 2019, but they will be 5-door sedans, not the crossovers people crave. The good news is that more good electric cars are coming. The bad news is they aren’t coming fast enough.

Steve Hanley Steve writes about the interface between technology and sustainability from his home in Rhode Island and anywhere else the Singularity may take him. His motto is “Democracy is socialism.” You got a problem with that? 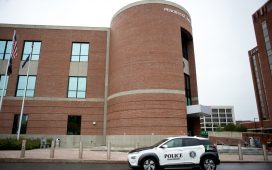 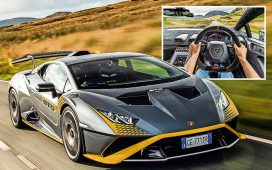 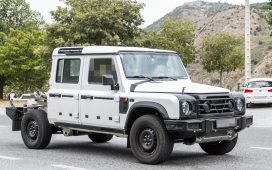 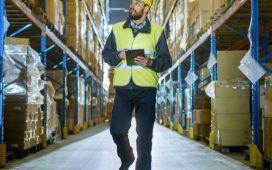