Sometimes, boring can be beautiful, especially in investing. So, while the latest streaming service or hottest new semiconductor chip may seem like the most exciting parts of the tech sector, KLA (NASDAQ:KLAC), which makes “boring” tech products by comparison, has outperformed not only the broader index, but even its semiconductor peers this year as well.

KLA — formerly called KLA-Tencor, due to the merging of KLA Instruments and Tencor Instruments in 1997 — is the leader in process diagnostic control equipment. Essentially, these tools make sure there aren’t any imperfections on silicon wafers, masks used to shape etch and deposition onto these wafers, or post-manufacturing packages.

These tools have become increasingly important as semiconductor manufacturing has progressed to smaller and smaller nodes. These advanced nodes require extremely precise manufacturing processes, as even the slightest imperfection can throw off an entire “batch” of chips, reducing yields and costing big chipmakers money. 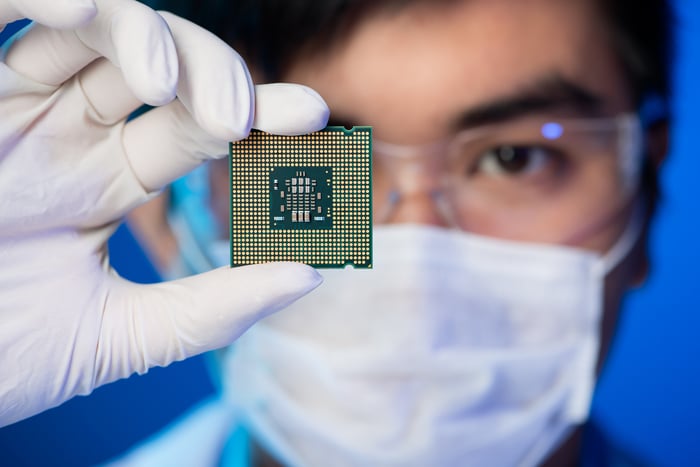 While KLA isn’t the largest semiconductor equipment company, it has a dominant market share in the niche of process control equipment. In fact, KLA has over 50% of this market, four times higher than the next largest PDC equipment competitor. Domination of the niche has allowed KLA to spend nearly as much on research and development as the next largest PDC competitors make in revenue — quite a competitive advantage.

That scale advantage should insure KLA’s leadership going forward, as the company expects to introduce innovation at two times the speed of the overall PDC market.

Earlier this year, KLA acquired Israeli firm Orbotech. While the acquisition was only $3.4 billion, compared with KLA’s $24 billion market capitalization today and around $20 billion at the time of the acquisition, Orbotech stands to increase KLA’s addressable market by almost 30%.

Orbotech makes inspection and process equipment, but targets complementary end markets of printed circuit boards and flat panel displays. KLA believes it can get about 50 basis points of synergies from the company’s already robust gross margin, and further believes that Orbotech is set to grow its revenue by almost 50% over the next four years.

3. Services is the emerging star

KLA management also pointed to the strength of the company’s services offering, which encompasses maintenance, software, refurbished systems, and other big data services that help clients ramp up production while maximizing yields.

The services segment makes up about 25% of its current revenue, but it’s growing at a robust 9%-11% rate, higher than the overall company. This has been due to the company innovating new value-add services, as well as the continued growth of the company’s installed base. Management pointed out that 70% of the company’s $1.3 billion in service revenue now comes from subscription-like annual contracts, up from 10% in the past.

KLA, shockingly, still has equipment in the field from 1990, and the average age of used equipment has increased from four years in 2000 to 14 years today after nearly quadrupling the installed base. That sets up well for more ongoing services, and could change investor sentiment that KLA does more than just sell equipment, which can go through volatile cycles.

KLA also laid out its long-term financial targets for investors, and they were robust. In fiscal 2023, the company is targeting between $7 billion and $7.5 billion in revenue, up from $5.1 billion estimated for this year, and diluted earnings per share between $14.50 and $15.50, up from the $8.13 EPS forecast for 2019.

The EPS target would mean that KLA is trading at just around 10 times its guided earnings for 2023. While the semi equipment sector is prone to cycles, that valuation is still favorable given where interest rates and valuations of other tech companies are.

In light of the company’s optimistic projections for its business and financials, management also announced a big hike in its quarterly dividend from $0.75 to $0.85 per share and an increase in its buyback authorization by an additional $1 billion. The new buyback adds to the existing program, which had $859 million remaining at the end of the June quarter.

Analysts clearly liked what KLA had to say after its report, with several analysts boosting their targets afterwards. While the stock has already had an impressive run, it’s still reasonably priced, should KLA hit its 2023 targets. Semiconductor capital equipment stocks tend to drop when there is uncertainty about semiconductor demand, so while we are coming out of a downturn now, KLA should definitely be on your list should we encounter another slowdown in the chip space.

Are These The Top Biotech Stocks To Buy As A Third Vaccine Result Is Announced? – Nasdaq