Yet nearly 50 percent said they planned to quit as part of a New Year’s resolution.

Collin Czarnecki, lead researcher of the survey conducted by Harmony Healthcare IT, a health data management firm, said the findings show that more awareness needs to be spread on the dangers of vaping, particularly for young adults.

It comes on the heels of the US Food and Drug Administration’s (FDA) Thursday announcement of a ban on most flavored e-cigarettes to curb the rise of youth vaping. 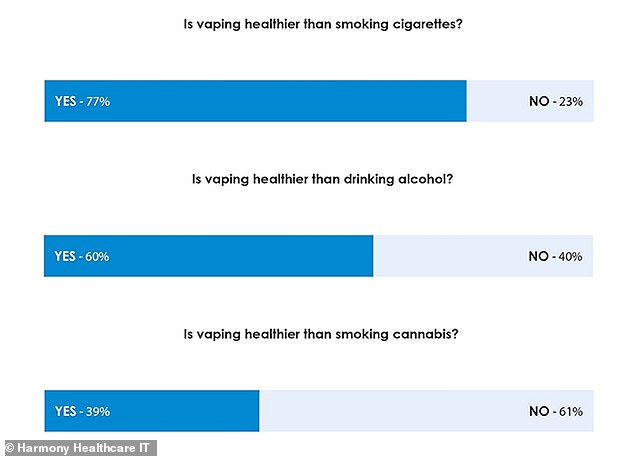 In a recent survey, 77 percent of currently vapers under 40 said they believe using e-cigarettes was healthier than smoking cigarettes and 60 percent said it was healthier drinking alcohol

For the report, the team surveyed nearly 2,000 e-cigarette users in the US between ages 18 and 38.

Participants were asked questions about what they vaped, how much, how quickly and for how long they’ve vaped, as well as queries on their views are on e-cigarettes.

Nearly one-third of users said it took two days or less to finish a pod or cartridge of cannabis or nicotine.

Vaping one nicotine pod – which in many cases is little bigger than a thumbnail – is equivalent to smoking two or three packs of cigarettes.

‘There are a lot of misconceptions about health and vaping since it became a bigger trend in the last couple of years,’ Czarnecki told DailyMail.com.

‘It might seem to be “healthier” because you’re not physically smoking, but depending on the frequency of how much you’re vaping, you’re still getting a lot of nicotine.’

Researchers also asked the participants about the recent spate of vaping-related illnesses which have sickened 2,561 and killed 55.

READ  High cholesterol causes and symptoms - and how to lower it

An additional 56 percent said they were considering quitting vaping because of the illnesses, although 48 percent said it was also a New Year’s resolution. 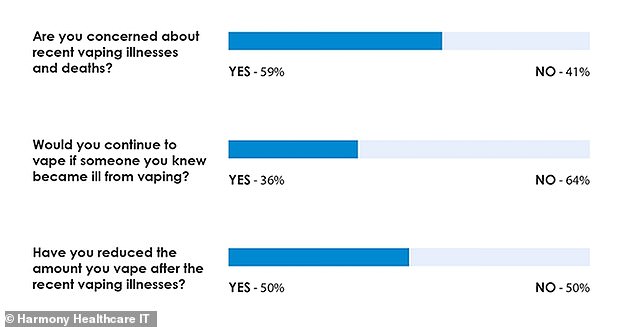 Seventy-nine said it was less than 500 people, more than three-fold fewer than the actual number. At the time of the survey, there 1,888 cases.

Most of the victims are male with 80 percent under the age of 35.

‘There is not enough education or awareness about what’s going on,’ said Czarnecki.

‘That’s why need to direct that message to younger vapes and put all our resources into preventing these numbers from rising.’

The FDA announced its own attempt to slow down the rising rates of youth vapers by banning all flavors aside from tobacco and menthol.

‘The United States has never seen an epidemic of substance use arise as quickly as our current epidemic of youth use of e-cigarettes,’ Health Secretary Alex Azar said in a statement.

‘We will not stand idly by as this crisis among America’s youth grows and evolves, and we will continue monitoring the situation and take further actions as necessary.’

READ  Eye warning: Seven signs in the eyes to watch out for - it could be cancer

Vitamin C deficiency symptoms: Three ways a lack of the vitamin can affect the body

Going to east Asia? Your travel rights regarding coronavirus explained

Type 2 diabetes: Three of the best foods to eat for breakfast to lower blood sugar

Coronavirus may be spreading so quickly due to fecal transmission, researchers suggest

Running Stories: How running helped me fight anxiety and bulimia

The poster project spreading 'happiness and kindness' to NHS staff

Kylie Jenner has found three little words that sum up our age of anxiety...

Here is what’s going on with the yield curve

Coronavirus latest: When should the UK 'self-isolate'? Dr Sara offers her advice

States are prosecuting women in the name of 'fetal rights'. We should all be...