Britain’s new horde of lockdown cyclists are being urged to consider insuring their expensive bikes, after it was revealed that the average set of wheels now costs more than £800.

Almost two fifths of people who purchased a bike over the past 12 months have no cover for it, either under a home insurance policy or through specialist bike insurance, according to Aviva.

Enthusiasm for cycling hit new highs over the past year, with retail bicycle sales rising by 60 per cent between March and December 2020 according to The Bicycle Association. 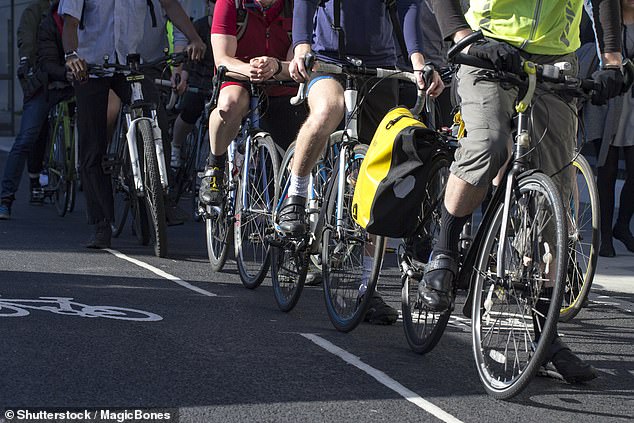 Home insurance policies usually cover pedal cycles and e-bikes when in the home, although this may not extend to taking the bike out and about.

And GlobalData estimates that 1.3 million Britons bought a bicycle during the first national lockdown alone, meaning potentially hundreds of thousands of people have no protection in place.

The average purchase price of a bicycle in the last 12 months was £835 across all models, according to Aviva.

Its research also found that one in three people have purchased an e-bike, rather than a standard bicycle.

Thefts were much more prevalent amongst cyclists with e-bikes. Some 21 per cent of e-bike riders have had one stolen, compared to just seven per cent of people with standard pedal cycles.

Most people are storing their bicycles in garden sheds, private garages or within their homes, whilst some store it in their garden or use a public bike storage rack.

Is your bicycle at risk?

A lot depends on where in the country you live – with those in cities often fairing much worse than those living in towns or the countryside.

There were 72,640 bikes reported stolen in 2020, according to analysis of ONS data by MoneySuperMarket, which amounts to 199 bicycle thefts per day on average.

Cambridge is the UK’s top hotspot for bike thefts. The city recorded 18.4 per 1,000 people in 2020, while the next-worst cities, Oxford and Reading, reported eight and five stolen bikes per 1,000 people respectively.

With the country easing out of lockdown and people set to travel once again, it’s even more important to make sure bikes are covered for theft and damage, says Kate Devine, home insurance expert at MoneySuperMarket.

Whilst the data shows that some areas are safer than others, taking out insurance – either by including it in your home insurance policy or by taking out specialist bike insurance – can ensure you’re not left out of pocket if your cycle does get stolen.

It doesn’t take long, provides peace of mind, and using a comparison site can get you a good deal.

What insurance do you need?

With bicycles often being among a person’s most expensive belongings, Aviva is calling on people to consider what cover they have in place.

Some 12 per cent of policies do not cover bikes at all, according to research from financial information service Defaqto.

How do you make a claim?

Then you will be asked to complete a claims form, either online or via pen and paper.

Once you’ve submitted your claim, be sure to send in any additional supporting documentation needed.

Defaqto also says that 20 per cent of home insurance policies that cover bike theft offer less than £1,000, and 5 per cent less than £500.

Home insurance policies usually cover bicycles and e-bikes when in the home, but this may not always extend to taking the bike out and about.

‘Many home insurance policies cover possessions outside the home as well as within it and these will generally cover bikes as standard,’ says James Andrews, senior personal finance editor at money.co.uk.

‘The thing you need to check for is ‘away from home’ cover – which can generally be included as an add-on if it’s not there already.’

There are also stand-alone products available, which provide specialist cycle protection against theft and damage with optional add-ons, including legal expenses, personal accident and loss of earnings insurance, in case the customer is injured while cycling and unable to work as a result.

‘More expensive models may need to be listed separately to ensure they are fully covered, and similarly there may be a limit for items stored in sheds and outbuildings – often around £2,500.

‘It’s really important that customers do their homework, read through policy documents and note any restrictions, so they choose the product that’s most suitable for their cycle.’

How to keep your bike safe

1) Invest in a good quality lock – or two

‘You get what you pay for when it comes to locks, meaning a cheap lock will be little deterrent to a bike thief,’ says Sean Thompson, insurance expert at MoneySuperMarket.

If you’ve taken out bike insurance, make sure you know the policy exclusions to prevent voiding your cover or having a claim rejected.

If you use your bike for monetary gain, such as being a cycle courier, you will likely not be covered.

You will also not be covered if you cannot prove you own the bike, so keep the receipt of sale.

Any accidents that may happen under the influence of drugs or alcohol will void your claim.

And theft of your bike when you have not secured your bike properly will also see most claims rejected.

Read More   What is Dozens and why is it advertising a 5% savings rate?

‘In most cases, the more expensive a lock, the better it will be at protecting your bike from theft – D-locks are often the most secure.

‘Two locks are more likely to deter a thief, because it is more of a challenge to prise both open.

‘It is also unlikely that a thief will have the correct tools to break both a D-lock and a chain lock, so a combination provides a formidable opposition.’

2) Lock your bike securely, including the wheels

‘Make sure to attach your bike to something that can’t be moved or lifted, as your bike is only as secure as the thing you attach it to,’ says Thompson.

‘For example, a mesh fence only needs a small pair of wire cutters to get through.

‘You should also lock the wheels together with the frame, ensuring the D-lock is secure and close to the bike.’

3) Lock your bike in the safest location

‘Never leave your bike in an isolated place, instead choose to lock it in a well-lit area that people pass frequently and, if possible, with CCTV near to your location,’ says Thompson.

‘You will need to keep it locked up even if it’s in your own shed or garage. Although requirements vary by insurer, it’s still a safer bet to lock it up.

‘You won’t need to lock a bicycle kept inside your locked home.’ 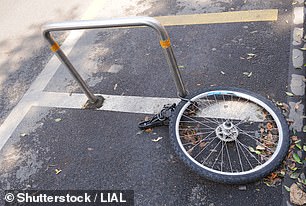 ONS data shows 72,640 bikes were reported stolen in 2020, which amounts to 199 bicycle thefts per day on average

Register your bike with a tracker website such as Immobilise so police authorities can trace and identify your bike if it does get stolen.

5) Make it easier for the police to identify your bike

Photograph your bike and note down the serial number, make and model. If it does get stolen this will make it easy to identify to the police and insurers.

What are the drawbacks of relying on your home insurance?

One of the major drawbacks of relying on contents insurance is that there is typically a high excess to pay for any claim you make.

· Personal accident: In the event of serious injury or death sustained from riding your bike, personal accident cover gives you and your family peace of mind

· Third party liability: This covers you, just in case you injure another person or damage their car or bicycle

· Accessories: This part of the policy would cover you for any equipment that may get lost, stolen, damaged or vandalised on your bike (e.g. helmet, clothing, GPS or lights)

· Cycling abroad: The policy would cover you for cycling on roads in countries other than the UK

· Competition use: Some policies will cover you taking part in time trials, road races and triathlons

Read More   Uber, Lyft may yet save year from worst IPO start since 2016

‘Paying for the first £250 of a £10,000 claim after a fire destroys all your worldly possessions is relatively insignificant,’ says Andrews.

The second problem is the single item limit.

You need to list higher value items – for example items worth £350 or more – on your home insurance policy to make sure they are covered.

‘This is true of everything from tablets to engagement rings to bikes,’ says Andrews.

‘If you forget to do that for your bike, you might discover you only get a fraction of its value back.’

Finally, by claiming on your contents insurance, it will likely push up your home insurance premiums.

‘Making a claim on your home insurance for a stolen bike will push up the cost of cover in the years to come,’ says Andrews.

‘But claiming on a standalone bike insurance policy won’t affect your home insurance quotes one bit.’

What are the advantages of specialist bicycle insurance cover?

Your bike might be covered under your home insurance, but if you have an expensive cycle which you use frequently then specialist bicycle insurance could be a better option.

Just like with car insurance, the inclusion of third party and legal cover can end up paying dividends if the worst case scenario were to occur. 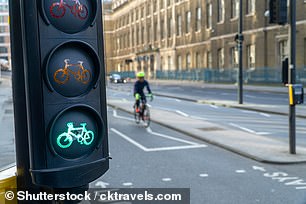 ‘If a person steps out in front of you, say at a crossing, courts are likely to put at least some of the blame on the cyclist if they sue,’ says Andrews.

‘And the compensation costs for even relatively minor injuries can run into tens of thousands of pounds of legal expenses.

‘Even if you win the case, and the pedestrian is found to be at fault, you won’t be able to recover the legal costs of defending yourself against the claim from the person suing.

‘Considering specialist insurance including liability cover costs as little as £2 a month, it’s simply not worth not having it.’

Specialist bike insurance can also pay out for injuries you sustain while cycling.

‘Even if no one else is involved – cycle rescue to get you (and your bike) home, accidental and malicious damage to the bike, replacement bike hire and even loss of earnings if you’re using your bike for work,’ adds Andrews.