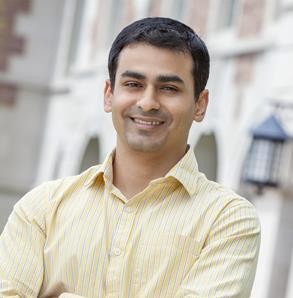 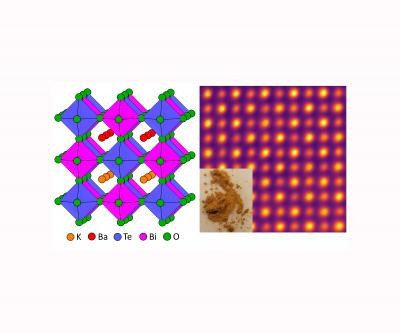 This is an atomic model of KBaTeBiO6 (left), the most promising of 30,000 oxides in a potential solar panel. At right is a scanning transmission electron micrograph showing the atomic structure of KBaTeBiO6, along with snapshot of the synthesized powder.
(Photo : Rohan Mishra)

Solar panel installations are on the rise in the U.S., with more than 2 million new installations in early 2019, the most ever recorded in the first quarter, according to a recent report by Solar Energy Industries Association and Wood Mackenzie Power & Renewables. To meet the ever-increasing demands, low-cost and more efficient alternatives to silicon-based solar cells — currently the most widely used technology — are desirable.

In the past decade, lead-halide perovskites have surged as the most promising class of alternative materials; however, they are unstable. They contain lead, which is toxic and poses potential health and environmental hazards such as groundwater contamination.

A team of engineers at Washington University in St. Louis have found what they believe is a more stable, less toxic semiconductor for solar applications using a novel double perovskite oxide discovered through data analytics and quantum-mechanical calculations.

Their work was published online June 11 in Chemistry of Materials.

Rohan Mishra, assistant professor of mechanical engineering & materials science in the McKelvey School of Engineering, led an interdisciplinary, international team that discovered the new semiconductor, made up of potassium, barium, tellurium, bismuth, and oxygen (KBaTeBiO6). The lead-free double perovskite oxide was one of an initial 30,000 potential bismuth-based oxides. Of those 30,000, only about 25 were known compounds.

Using materials informatics and quantum mechanical calculations on one of the fastest supercomputers in the world, Arashdeep Singh Thind, a doctoral student in Mishra’s lab based at Oak Ridge National Laboratory, found KBaTeBiO6 to be the most promising out of the 30,000 potential oxides.

“We found that this looked to be the most stable compound and that it could be synthesized in the lab,” Mishra said. “More importantly, whereas most oxides tend to have a large band, we predicted the new compound to have a lower bandgap, which is close to the halide perovskites, and to have reasonably good properties.”

The bandgap is the energy barrier that electrons must overcome to form free carriers that, in the context of a solar cell, can be extracted to power an electrical device or stored in a battery for later use. The energy to overcome this barrier is provided by sunlight. The most promising compounds for solar cell applications have a bandgap of about 1.5 eV or electronvolt, Mishra said.

Mishra discussed the possibility of synthesizing KBaTeBiO6 with Pratim Biswas, assistant vice chancellor, the Lucy & Stanley Lopata Professor and chair of the Department of Energy, Environmental & Chemical Engineering. Shalinee Kavadiya, then a McKelvey Engineering doctoral student and now a postdoctoral research associate at Arizona State University, got to work on perfecting the recipe.

“Shalinee spent about six months synthesizing the material,” Mishra said. “Once she was able to synthesize it, as we had predicted, it was stable and had a bandgap of 1.88 eV, which we also predicted.”

Mishra said these are first-generation solar cells that need more fine-tuning of the bandgap, but it is a good first step toward non-toxic solar cells.

“This shows that we can go away from these lead-halide perovskites,” Mishra said. “This opens up a really big space for designing semiconductors not just for solar cell applications but also for other semiconductor applications, such as LCD displays.”

Next, the team will study the role of any defects in this new semiconductor and look to more advanced synthesis techniques, including using aerosol techniques.

©2017 ScienceWorldReport.com All rights reserved. Do not reproduce without permission. The window to the world of science news.

Asteroid alert: NASA tracks a 557FT asteroid on Earth 'close approach' – But will it hit?

UK, US and Industry Officials to Meet Before Huawei Decision – TOLOnews