The inspectors have been in and Rishi Sunak has passed his first examination from the International Monetary Fund.

A dismal UK growth forecast for 2020 has been downgraded after just a fortnight with a projection of a jolting 10.4 per cent loss of output.

But with the virus rampaging through cities and towns, from Manchester to Slough, that is not surprising. There is sound advice from the IMF’s managing director and chief examiner Kristalina Georgieva. The impulse of a fiscally robust Treasury is to keep a close eye on the bottom line. 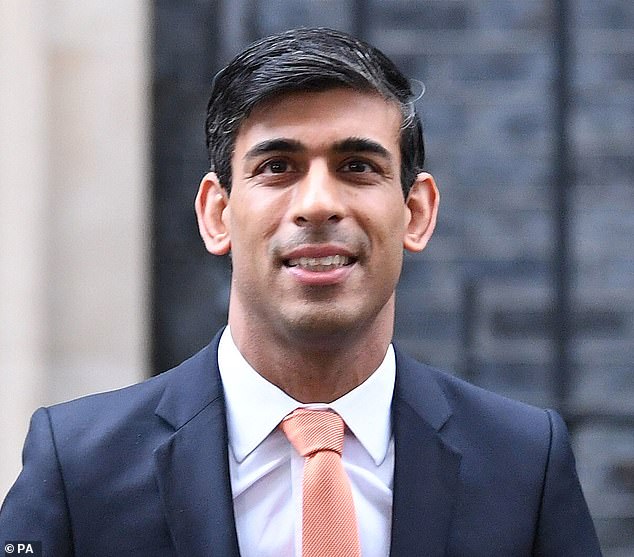 Test: The inspectors have been in and Rishi Sunak has passed his first examination from the International Monetary Fund

The repairs made to the public finances by George Osborne, after the financial crisis of a decade or so ago, have given the UK the space to throw huge sums at saving jobs and keeping vulnerable enterprises alive.

Georgieva’s advice is crystal clear. Borrowing may hit £400billion this year and debt is set to soar further above £2trillion, but it is not the time to withdraw support yet.

As the voice of a kinder and gentler IMF, Georgieva singled out praise for the enhanced Universal Credit – making it harder to remove the Governnment’s £20-a-week bung anytime soon.

She also argued that when the time comes to pull up the drawbridge, there should be focus on taxes and public spending measures which prioritise equality.

Britain will not reclaim all the lost output or jobs in 2021. In the IMF’s view, the UK’s hard-earned fiscal and monetary credibility, a willingness to invest in infrastructure, a flexible labour market and healthy banking sector should help restore prosperity.

An important building block will be a UK-EU trade accord. That’s something No10 may not have wanted to hear.

After a run of dispiriting third-quarter earnings reports, finally a sprinkling of optimism. Antonio Horta-Osorio has deployed Lloyds’ huge presence in the mortgage market to exploit the stamp duty holiday which is driving a mini housing boom.

Shell managed to deploy its big retail presence and restored its progressive dividend from a lower base. And advertising behemoth WPP is demonstrating that there is life after Martin Sorrell, capturing monster clients in HSBC and Uber.

As for serial under-performer BT, it is starting to look as if entrepreneurial chief executive Philip Jansen is making a difference.

Openreach is building out more fibre, but not nearly fast enough. Future earnings guidance has been upgraded, enough to hint at a dividend return. Jansen is still pushing a boulder uphill, however, when it comes to the fundamental restructuring required if Britain is to have the reliable broadband and 5G networks critical to its global ambition.

What has to be recognised is that the three months to September were a shard of light on both sides of the Atlantic after the Covid gloom. In the advanced economies infections and deaths were down, output climbed and consumer and business confidence slowly restored.

The message for investors is that the dividend famine which arrived with lockdown is easing. Banks are at the start of a dialogue with the Financial Conduct Authority and Bank of England about dividend restoration. The ban on payouts (loudly protested by HSBC) has had the perverse effect of flattening share prices and weakening equity to capital ratios. Indications from the latest results suggest that at Barclays, Lloyds and HSBC bad debt provisioning was overdone in the first half. The liability for dodgy bounce-back loans will fall back on the Treasury. Finance is holding up well. But banks could be knocked back again if, as the IMF advises, the Bank of England eventually opts for negative rates.

Forget all the guff in the 60-page G4S defence document about its 2025 goal to be the world’s leading security company and to act with integrity and respect.

Everything we know about G4S’s past, and how difficult it is to control a sprawling and undisciplined workforce, militates against that. What is certain is that private equity ownership by Garda World, or a second private suitor, Allied Universal, will do nothing for the culture. Garda’s bid is insultingly low, especially as G4S has raised its game with an improved revenue forecast of 4 to 6 per cent and stronger margins of 7 per cent.

The battle here is against overseas bottom feeders, loss of the governance, which comes with a public quote, and the broader public interest. That’s why big battalion investors should pull down the shutters.