The indifference in the Westminster bubble to the harm Brexit warfare is doing to Britain’s economy and the City has been disturbing.

While the politicians were playing games, business investment slumped, big US investment banks made plans to decamp and inward investment stalled.

The only buyers to be seen have been bottom fishers, such as private equity firm Advent, currently held up in its mission to buy aviation pioneer Cobham on the cheap.

Just how quickly confidence could return, recession averted and the strain on the public finances repelled, if there is a deal between the UK and European Union, is illustrated by the latest buoyant moves on financial markets. 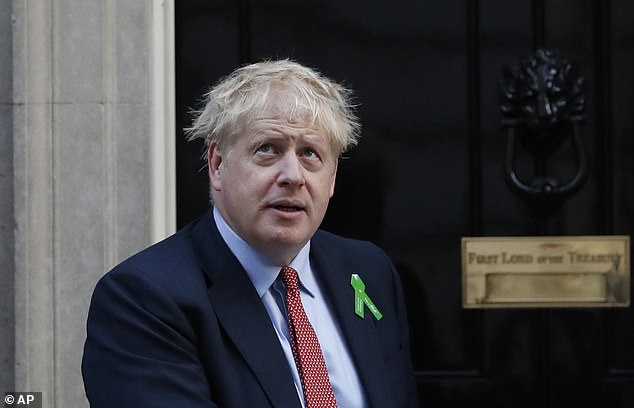 On the brink? JP Morgan has switched the odds on Boris Johnson achieving a deal from 5 per cent to above 50 per cent

The mini-slump in the pound turned into a rally with sterling up 2 per cent against the dollar, the cloud over the UK-focused companies lifted with the FTSE 250 soaring by 4.19 per cent, domestic banks were shaken out of the doldrums and government stock prices surged on both sides of the Irish Sea.

But it is not just corporate Britain and big overseas investors such as Nissan which will breathe a sigh of relief if a Brussels deal can be secured.

One of the great unspoken concerns surrounding a No Deal Brexit is that the big investment banks would start routing transactions through Frankfurt or Paris.

If that were to happen, it would open a chasm in the public finances, with JP Morgan among the country’s biggest taxpayers. It has switched the odds on Boris Johnson achieving a deal from 5 per cent to above 50 per cent.

Quite a change! And that’s not all. A deal would release up to £15billion of government funds committed to departments and agencies to finance a No Deal Brexit.

As importantly, it would allow the major forecasters, the Office for Budget Responsibility, to move to a more upbeat scenario for the economy.

Even a small move of the dial towards higher output would mean more headroom for the Chancellor, Sajid Javid, as tax receipts strengthen and the risk of higher welfare costs is repelled.

Much of this might seem on a wing and a prayer. Reality is that in spite of the slump in business investment, the economy so far has managed to avoid the worst of the global downturn with parts of the service sector roaring away.

The possibility of a Brexit deal always promised a whoosh for the economy. Sunny uplands may be back within reach.

Just as well for Terry Smith, former chief executive of brokers Tullett Prebon, that the Financial Conduct is snail-like in completing probes.

Tullett Prebon has been hit with a fine of £15.4million dating back to 2008-10 over lavish entertaining and ineffective controls.

Smith has moved on to greater things as founder of asset manager Fundsmith, which is having a charmed life.

How different things might have been had senior managers at Tullett been held responsible for failing to respond to red flags of misconduct much earlier, and co-operated with regulators rather than providing what the FCA describes as an ‘incorrect account’ of an audio recording relating to the misdeeds.

None of this should come as a surprise to anyone tracking the FCA.

Its chief executive Andrew Bailey is having to deal with a raft of unresolved probes dating back to the financial crisis of more than a decade ago.

This includes potential disciplinary action against the former chief executive of HBOS, Andy Hornby, who has enjoyed three new careers since collapsing the bank.

He has been the boss of Boots, went on to work at gaming groups Coral, Ladbroke and GVC and has now landed at Restaurant Group.

All this is possible because of the FCA’s regulatory backlog, which allows those involved in alleged failure and wrongdoing to make new careers without opprobrium.

Others still awaiting disciplinary action have retired, moved abroad or died. Not a great scoresheet for a regulator that is intended to uphold integrity in the Square Mile.

One admires the confidence of broker Investec, which says the Competition & Markets Authority is unlikely to block the Advent deal for Cobham.

Maybe. But Business Secretary Andrea Leadsom could insist on stipulations which could change the economics of a debt fuelled bid.

Moreover, since Andrew Tyrie took over as chairman 15 months ago, the CMA has surprised by looking at the wider impact of deals on all stakeholders.

It isn’t over yet.

Overnight Markets: US stocks plunge on fears of coronavirus pandemic

Couple expecting baby girl stunned to discover they were in fact having a BOY...

Is it possible to get broadband without a landline or line rental – and...