Under normal circumstances, it might have been an opportunity for a bit of boasting about the ‘Boris Bounce’.

The public finances in February were robust with a small surplus of £0.4billion based upon a sharp uptick in taxes by 3 per cent in response to a recovering economy.

Instead, the economy now finds itself on a wartime footing. The Bank of England has torn up all the rules of prudent monetary policy. 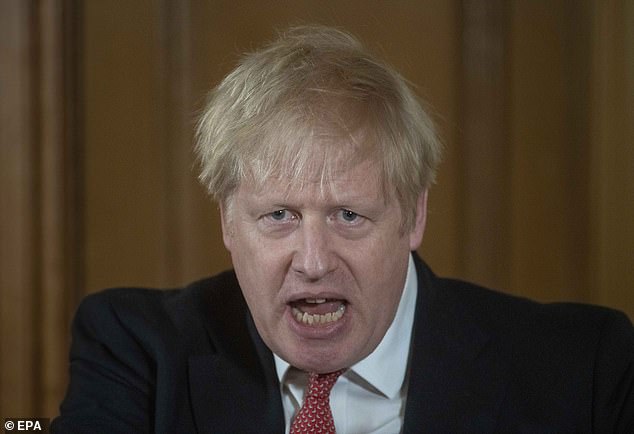 Wartime footing: The Bank of England has torn up all the rules of prudent monetary policy to fight the coronavirus

The reduction in interest rates to 0.1 per cent, the extra money printing of £200billion, the release of counter-cyclical capital to allow the banks to lend more and, in the latest move, an end to the stress tests on bank balance sheets.

In other words, in the fight against the health and economic death and destruction unleashed by the coronavirus, anything goes.

The collapse in economic activity, expected to be anything up to 15 per cent in the second quarter, will make the aftermath of the financial crisis – when GDP plummeted 5 per cent – look like the teddy bear’s picnic.

There have been some very big numbers thrown around, notably the provision of £330billion of loans offered by the Bank of England to hard-pressed companies facing cash flow difficulties.

This was sold as a huge fiscal boost of 15 per cent of GDP. The reality is that it is nothing of the kind.

It is a contingent liability, and no one has any idea how much of the facility will be used or how much will be paid back.

What that means is that there is still a large amount of fiscal headroom. Borrowing rose to 25 per cent of output during the Second World War, as Robert Chote of the Office for Budget Responsibility pointed out this week.

As the economy collapses so will tax revenues. Transfer payments, through the social security system, will climb sharply as we saw after the financial crisis when borrowing ballooned to £150billion in short order.

The subsidies to employers and employees to keep people in work, the likely rescues for the airline industry and extra cost for the NHS will be enormous.

Unlike the Great Recession, which led to a decade of austerity, rocketing borrowing this time could be short term if, as with most natural disasters, conditions for a ‘V’ shaped short-term recovery can be created.

The big cannons of support are intended to impress borderline disorderly financial markets and signal a seriousness of purpose.

But the ammunition can be unloaded.

Marks & Spencer, Wetherspoons and Travis Perkins are among the latest to join the club. As if equity income funds didn’t have enough problems what with the cratering of capital values, incomes are now being devastated too.

We have heard from some company chiefs such as Willie Walsh, boss of BA-owner IAG, who will not be taking any bonuses.

It would be much more convincing if the same directors who are cutting back dividends to improve cash flows saw Covid-19 as a chance for FTSE 350 bosses to improve relationships with under-stress workforces, put the ‘fat-cat’ public image to bed and end the upwards-only bonus lottery.

Short term bonuses should be cancelled as part of a purge in Britain’s boardrooms of the racket of long-term incentive plans.

With the assistance of remuneration advisers, non-executives allowed the whole system to get out of hand, resulting in the disgrace of the £82million for Jeff Fairburn at Persimmon and the £40million for his successor Dave Jenkinson.

Corporate buccaneers responsible for building unsafe houses are unlikely to have to join supermarket queues in York. I would go further.

It is not just bonuses but also executive privileges – from limousines to housing allowances – which should be axed, and basic salaries reviewed.

Doubtless the captains of industry are working around the clock to keep corporate Britain functioning. But it is time for them to show some wartime self-sacrifice and, to quote a mantra, do whatever it takes.

Even chocoholics like this writer are scaling back consumption as Hotel Chocolat has disclosed, noting that Covid-19 trimmed trading in March by 5 per cent (a bit different to 80 per cent at Burberry).

Defying the gloom, the company is raising £20million to support long-term growth plans including a new production line and expansion in Japan.

Co-founders Angus Thirlwell and Peter Harris are subscribing £2million each. That’s a lot of cocoa beans.