Nordstrom signage outside one of the company’s full-line department stores.

Allbirds will start selling its shoes in select Nordstrom department stores next month, the companies announced Tuesday, as the sneaker brand seeks tie-ups with other retailers to broaden its reach and post a profit.

Starting June 1, a selection of Allbirds shoes, including the company’s signature wool sneakers, will be available for sale in 14 Nordstrom locations. The assortment will expand to Nordstrom’s website and to additional stores later this year, the companies said.

For Allbirds, the move is a chance to win new customers and become profitable. It’s also emblematic of a broader trend among retailers such as Allbirds and Warby Parker that started by selling products exclusively online directly to consumers.

Increasingly, such direct-to-consumer companies — including Casper mattresses, Harry’s razors and athletic apparel makers Vuori and Outdoor Voices — have expanded to sell through third parties. Others have pushed to open dozens of brick-and-mortar stores to connect with shoppers in person. The moves have made the newer businesses more closely resemble long-standing retailers such as Nike or Ralph Lauren.

The deal helps Nordstrom build its reputation as the partner of choice for newer retailers looking to test the wholesale waters. It also helps give the department store company an edge over rivals such as Macy’s and Kohl’s with items that might draw shoppers.

Earlier this month, Allbirds announced its first two retail partners: Public Lands, a banner of Dick’s Sporting Goods, in the United States, and Zalandao in Europe. It teased at the time that more deals were in the works.

Selling through other retailers should help Allbirds reach consumers who would have not known about the brand otherwise, Joey Zwillinger, Allbirds co-founder and co-CEO, said on a post-earnings conference call in mid-May.

In particular, the company hopes to attract environmentally conscious shoppers. In 2020, Allbirds committed to cutting its carbon footprint in half by 2025. In addition to labeling all of its products with a carbon footprint score, the company said it sources natural materials found in trees and sugar cane fields and works to cut back on waste.

Allbirds’ brand awareness in the U.S. is still in the low double digits out of 100%, according to Zwillinger. Third-party retail can be “a highly effective way to build awareness and drive credibility,” he said on the call.

Allbirds is hoping the move helps lift investors’ confidence. Shares of the company have tumbled from an IPO price of $15, closing Monday at $4.68. Allbirds listed on the Nasdaq exchange last November, before the window for public debuts was frozen shut amid surging inflation and Russia’s war on Ukraine.

Allbirds also dialed back its outlook for the year, citing persisting disruption to its business overseas due to ongoing Covid-related lockdowns in China and the war in Ukraine.

This isn’t the first time Allbirds and Nordstrom have teamed up. In 2018, Allbirds opened in Nordstrom’s rotating pop-up exhibit, marking the sneaker company’s first trial with another retail partner. Nordstrom has worked with other online-first brands, including Kim Kardashian’s Skims line and On Running.

Zwillinger said on the conference call that Allbirds plans to be selective about how it grows its third-party business. The company doesn’t expect to see a material impact to its financials in 2022, but the partnerships should become a catalyst for new business by next year, he said.

BMO Capital Markets analyst Simeon Siegel has been a proponent of retailers using of wholesale to build a profitable business with strong gross margins, citing Ralph Lauren and Calvin Klein owner PVH as businesses that have successfully used the approach.

It’s when companies push too heavily into wholesale and use excessive discounting and unclear messaging that they can ruin their reputation, he said.

Nordstrom is set to report its fiscal first-quarter results after the market close on Tuesday.

The customer is always angry – here’s why | Letters 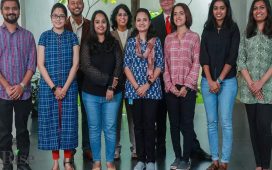 Eyestem raises Series A round from Biological E, Alkem and others

Next in talks to take £15m stake in struggling chain Joules