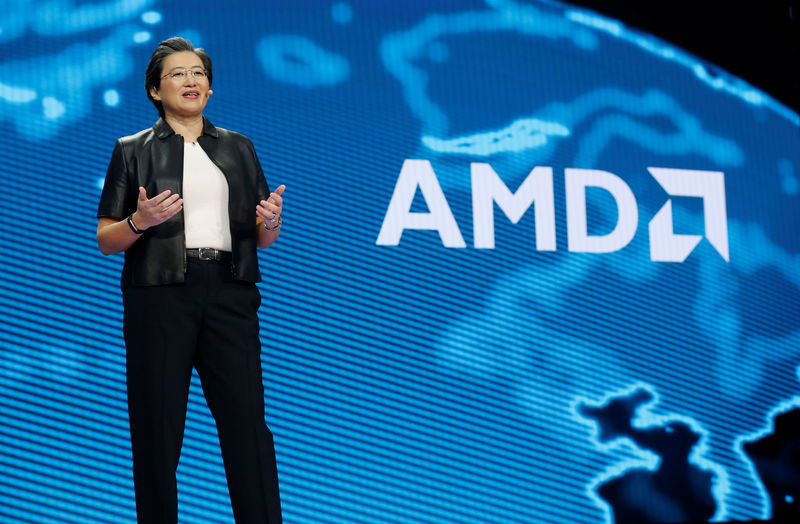 © Reuters. Lisa Su, president and CEO of AMD, gives a keynote address during the 2019 CES in Las Vegas

By Sonam Rai and Stephen Nellis

The Ryzen CPU chips will be launched in the middle of this year and will compete with Intel’s PC processors.

AMD will start shipping its Radeon VII (seven) graphics chips, which compete with Nvidia’s gaming chips, from Feb. 7 and the next generation of EPYC server chips in mid-2019, Su said.

All the three chips are based on AMD’s new 7nm manufacturing technology that packs more transistors on smaller chips and can boost performance at lower power.

AMD last year said it would quit trying to develop such advanced manufacturing techniques on its own and would instead turn to outside suppliers such as Taiwan Semiconductor Manufacturing Co Ltd (TW:), which analysts also believe is making 7nm chips for Apple Inc (NASDAQ:)

AMD’s EPYC server chips and the Ryzen CPU chips are based on Zen 2 architecture, an advancement over its Zen chips that was launched in 2017, establishing the chipmaker as an equal, if not better than Intel in terms of chip performance, according to many tech websites.

For Intel, which has faced production delays for its 10nm-based chips, this could mean a loss of market share to AMD, analysts have said. Intel has said it expects to ship 10nm PC chips later this year and 10nm server chips early next year.

Intel, the world’s biggest maker of computing chips for personal computers and data centres, has been a leader in manufacturing the tiniest chips so far but recently lost its title to Taiwan Semiconductor.

Jeff Bezos made billions by selling stock before Covid collapse

UK stocks fall with airlines and housebuilders among worst hit

Canada shares higher at close of trade; S&P/TSX Composite up 0.49%