Marcela Iglesias was so embarrassed of her teeth that she would only smile with her mouth closed and covered it regularly while talking photographs.

She said her ‘tiny, shrimpy teeth’ were a result of barely brushing them in childhood, when she drank up to seven cans of soda a day.

After her wedding was televised on Showstopper Bride in 2013, Ms Iglesias grimaced looking at her grin and knew she had to do something about it.

Ms Iglesias, who refers to herself as the Real Human Doll, longed for the contagious smile of Hollywood actress Julia Roberts.

She visited Dr Kambiz Kamanger at Agoura Advanced Dentistry who performed a month’s worth of surgeries, leaving Ms Iglesias with a smile that ‘makes her look younger’.

Ms Iglesias, from California, got her initials engraved onto her fake teeth as a celebration of what she overcame. 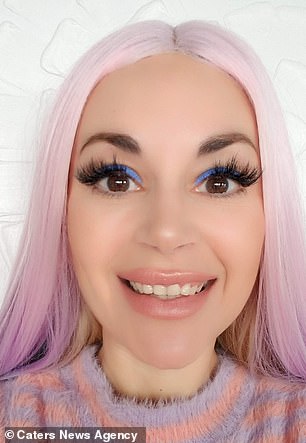 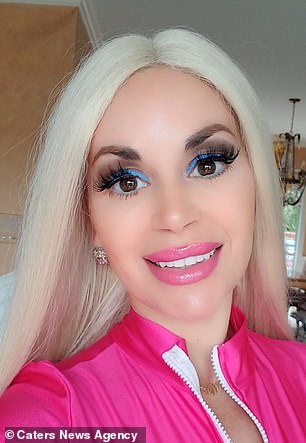 Marcela Iglesias, from Agoura Hills, California, paid $45,000 to get her Julia Roberts smile after covering her ‘shrimp teeth’ for years 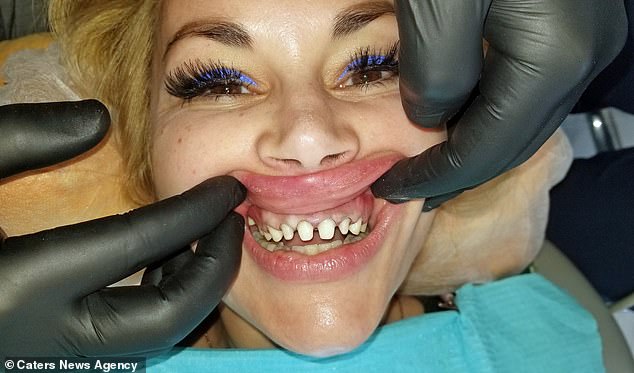 Ms Iglesias had a month of work on her teeth. This included having crowns, which were put on after her real teeth were filed down (pictured)

Ms Iglesias known as ‘Queen of Cosmetic Procedures’ and whose age is unclear, said: ‘I made the decision that 2019 is the year I want to smile again.

‘I wanted that big Julia Roberts smile. I also admire Pauly D from Jersey Shore and Kourtney Kardashian. Whenever they smile on TV, I smile with them.

‘We used to call me “shrimpy” teeth but now I have strong big teeth. My whole family were shocked, it’s changed my whole face and made me look younger.

A crown is an artificial restoration that fits over the remaining part of a prepared tooth, making it strong and giving it the shape of a natural tooth.

A crown is sometimes known as a ‘cap’.

Crowns are an ideal way to repair teeth that have been broken, or have been weakened by tooth decay or a very large filling.

A crown could be used for a number of other reasons, for example, the patient may have a discoloured filling and would like to improve the appearance of the tooth.

It may help to hold a bridge or denture firmly in place.

Crowns can be made of a variety of different materials, including porcelain, ceramic and glass, and new materials are continually being introduced.

When the dentist is happy with the fit and appearance of the crown, it will be fixed in place with special dental cement or adhesive. The cement forms a seal to hold the crown in place.

At the first visit, the dental team will prepare the tooth, take the impressions, make a note of the shade of the tooth, and fit the temporary crown.

At the second visit, the dentist will fit the permanent crown.

‘I used to put my hands over my mouth to avoid people looking at my teeth. Now every time I realise I’m doing it I smile even bigger than ever.’

Ms Iglesias first became self-conscious about her teeth in 2013 when she saw herself on the TV for the first time.

She said: ‘Before I had my wedding on a TV show, I never realised how bad my teeth looked. I was like “oh my god” and was so embarrassed by them.

‘In that moment, I finally saw how they looked to everybody else.

‘From there I managed to get by smiling with my mouth closed, but when I had to talk, sing or perform I knew I couldn’t hide them.

‘I would smile at home. But outside, on the red carpet or during TV work I hid them, only smiling with my mouth closed because my teeth looked hideous.’

Last month, she was motivated to go through with having work done after seeing herself perform her song ‘Human Doll’, which she released on March 9.

She said: ‘I know it sounded vain, but I wanted something to fix me and make me a little happier and more confident.’

Ms Iglesias went to Dr Kamanger who helped her to form a computer simulation of her dream smile – which she based off celebrities.

From there the team took moulds of Ms Iglesias’ teeth, X-rayed for cavities and other problems before performing a deep clean. 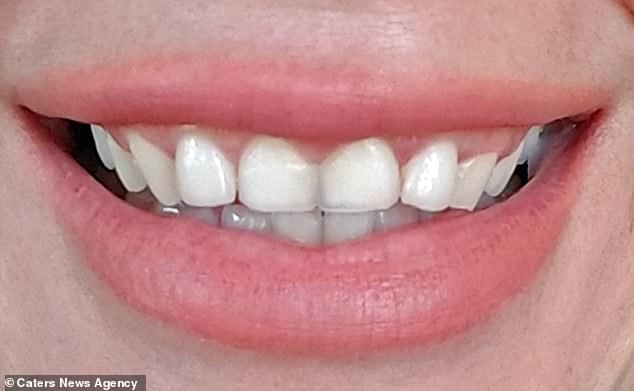 Ms Iglesias was self conscious of her teeth but feared dental work after a painful root canal 20  years ago. She decided to fix her teeth this year 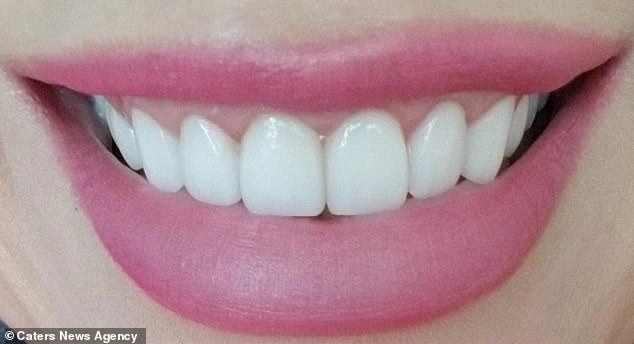 Ms Iglesias said: ‘My whole family were shocked, it’s changed my whole face and made me look younger’ 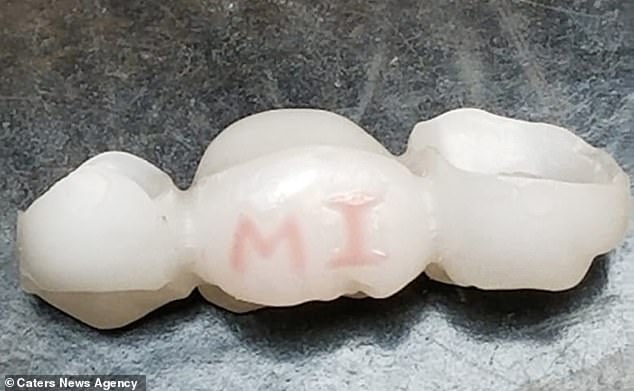 To celebrate overcoming her fear of dentistry, Ms Iglesias decided to permanently mark a fake tooth with her initials (pictured) before they were inserted

Following that she underwent three hours crowning her teeth. Crowns are a cap that is placed over the real, filed down tooth to create a new shape and size.

She had laser contouring on her gums, a procedure which redesigns the gum line if the patient is unhappy with where theirs sits, either making the teeth look smaller or larger than they prefer.

Dental bridges were used, which consist of one or more fake teeth in the place of a missing tooth that are held in place by dental crowns.

Ms Iglesias said: ‘When I saw myself with the new smile, I started to beam because I couldn’t believe it. I was actually smiling. 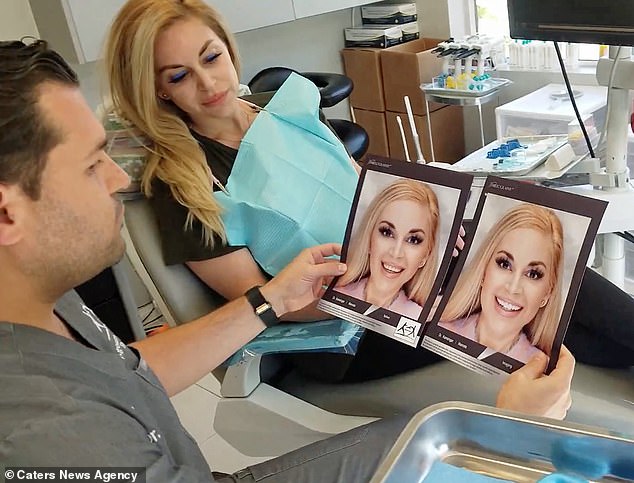 Ms Iglesias went to Dr Kamanger (pictured) of Agoura Advanced Dentistry, who helped her to form a computer simulation of her dream smile – which she based off celebrities 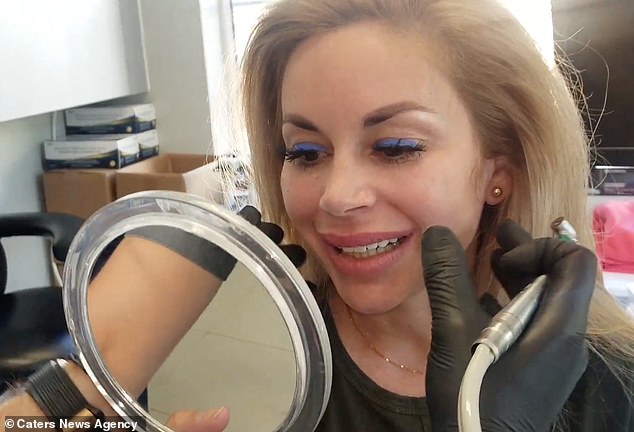 When she first saw her teeth, Ms Iglesias burst into tears after years of embarrassment 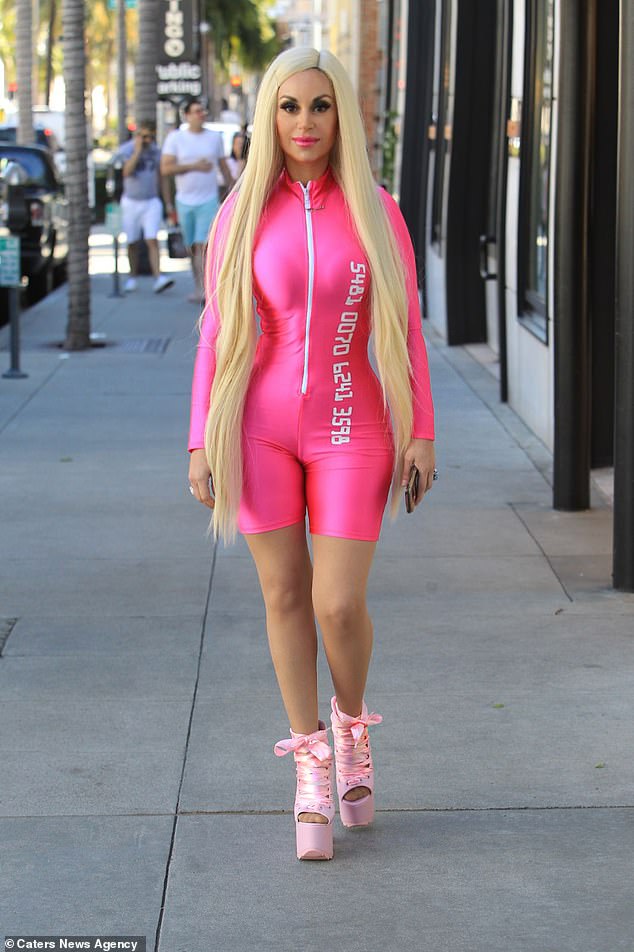 Ms Iglesias, pictured before her procedures, said: ‘I used put my hands over my mouth to avoid people looking at my teeth. Now every time I realise I’m doing it I smile even bigger than ever’

‘All of the emotions raced through my mind, I had finally done it and they looked amazing.

‘The crowns are beautiful and shiny, I love the shape and colour.

‘My husband and other people have told me my teeth make me look like a teenager because they are so much bigger and have changed my appearance.’

Beneath Ms Iglesias’ new, pearly smile lies a secret – that she organised prior to having them fitted.

To celebrate overcoming her fear of dentistry, she decided to permanently mark a fake tooth.

She said: ‘My idea was to carve my initials into the middle tooth of the bridge in the colour pink, so I visited the lab myself to have it done. Dr Kam was very shocked.

‘That one tooth has caused me so much drama in the past I wanted to remind myself of everything I went through and overcame.

‘People’s reaction has varied, from some saying “Oh my god, you are the craziest person” but others thought it was cool, who knows may I’ll have started a new trend.’

She had the world’s first spider web abs enhancement last week – three months after undergoing a similar procedure on her derrière.

Studies Reveal How Damaging Blue Light Can Be For the Eyes

How can I boost my energy? Five ways to fight tiredness

Coronavirus doctor's diary: 'We blame Eat Out To Help Out for our tragedy'

How to beat the itch and scratch cycle of eczema

The Guardian view on the social care crisis: fix a broken system | Editorial