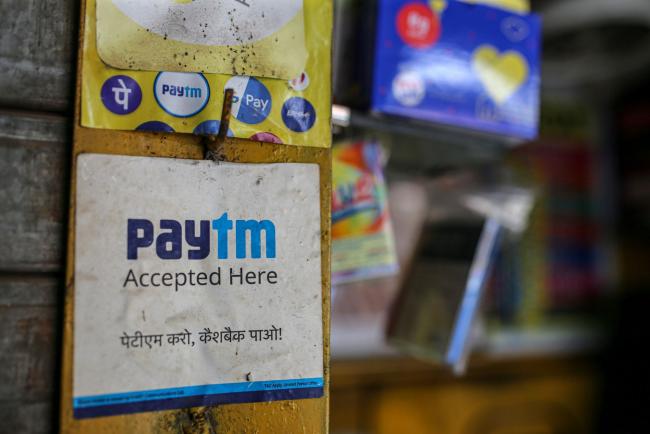 © Bloomberg. A store advertises the use of the Paytm digital payment system in Mumbai, India, on Saturday, July 17, 2021. Paytm, the Indian digital payments pioneer backed by SoftBank Group Corp., is seeking approval for a $2.2 billion initial public offering that could be India’s largest. Photographer: Dhiraj Singh/Bloomberg

(Bloomberg) — One 97 Communications Ltd., which operates India’s pioneering digital-payments brand Paytm, fell in its trading debut in Mumbai as investors questioned the company’s valuations and path to profitability.

This drop is in contrast to the trend of recent Indian internet IPOs that soared on their first day.

The company’s shares fell as much as 19% to 1,706.15 rupees ($23.95) before paring losses, compared with the IPO price of 2,150 rupees, the top end of the marketed range in the country’s largest initial public offering. Paytm raised about $2.5 billion in the sale in which retail investors bid for nearly twice the number of shares that were available.

Macquarie Capital Securities (India) Ltd. initiated coverage on the company with an underperform rating and a price target of 1,200 rupees, implying an over 40% downside from the issue price. BlackRock Inc (NYSE:)., Canada Pension Plan Investment Board and sovereign wealth funds such as that of Singapore were among anchor investors in the issue.

“We believe Paytm’s business model lacks focus and direction,” analysts Suresh Ganapathy and Param Subramanian wrote in a report issued before the trading debut. “Unless Paytm lends, it can’t make significant money by merely being a distributor. We therefore question its ability to achieve scale with profitability.”

Paytm was founded two decades ago by Vijay Shekhar Sharma, who pioneered digital payments in a predominantly cash-transacting country of 1.3 billion people. The name, short for Pay Through Mobile, rhymes with ATM.

IPOs in the South Asian nation have raised about $15 billion so far this year, already an annual record by total proceeds. Companies that started trading in 2021 rose by an average of 23% in their first session, according to data compiled by Bloomberg as of Nov. 15.

The market debut of Paytm, backed by Berkshire Hathaway Inc . (NYSE:), SoftBank Group Corp. and Ant Group Co., comes in a standout year for India’s internet startups which have attracted billions of dollars from global investors.