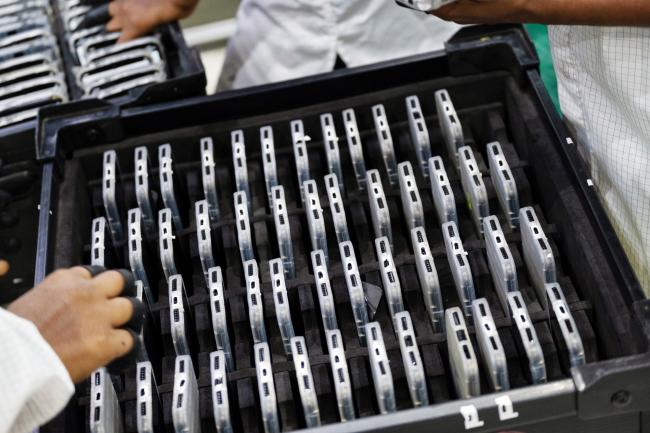 The assembler of most of the world’s iPhones and iPads posted net income of NT$30.7 billion ($1 billion) for the September quarter, compared with an average estimate of NT$27.7 billion.

“The lower pricing of the iPhone 11 has been effective in driving demand past the Street’s expectations,” Sean Lin, an analyst at President Capital Management Corp., said in a Nov. 4 note.

Assembly partners like Hon Hai and TSMC typically begin gearing up for production weeks, if not months, ahead of a device’s commercial launch. The outlook for Apple and its suppliers remains overshadowed by an ongoing trade war. AirPods, Apple Watch, HomePod and other devices made in China have been hit with 15% tariffs, and U.S. President Donald Trump hasn’t ruled out the possibility of a levy on iPhones starting Dec. 15.

Hon Hai, which gets half its revenue from its Cupertino, California partner, previously reported NT$1.38 trillion in sales for the September quarter, barely changed from a year earlier according to Bloomberg’s calculations off monthly revenue numbers. Its shares closed down 1.4% ahead of the earnings on Wednesday, after gaining 27% this year.

Read More   German bosses urge government to stop EU proposal on connected cars
Disclaimer: Fusion Media would like to remind you that the data contained in this website is not necessarily real-time nor accurate. All CFDs (stocks, indexes, futures) and Forex prices are not provided by exchanges but rather by market makers, and so prices may not be accurate and may differ from the actual market price, meaning prices are indicative and not appropriate for trading purposes. Therefore Fusion Media doesn`t bear any responsibility for any trading losses you might incur as a result of using this data.