Some estimates show that an astounding 92% of web apps have security flaws or weaknesses that can be exploited and some 16.2% of U.S. companies have two or more web apps that don’t securely store personally identifiable information. If you ask AppOmni founder Brendan O’Connor, the problem is less negligence than ignorance. Companies often lack the expertise required to lock down their services and platforms adequately.

That’s where AppOmni comes in. The startup, which today announced it has secured $10 million in series A funding led by ClearSky, provides a software-as-a-service (SaaS) platform to enable subscribers to scan, secure, and monitor apps using firewalls, access controls, and more. “Cloud providers often do a great job securing their networks and infrastructure. But buying a safe car doesn’t make you a good driver,” said O’Connor, who cofounded the company with former Salesforce director of product security Brian Soby. “We’ve seen first-hand how hard it is for organizations to apply consistent security and access controls across the broad spectrum of SaaS applications their business relies on.”

On the security side, AppOmni — which can de be deployed in minutes — lets teams define security rules for access and keep data from being exposed to third parties or the public internet. They’re able to apply role-based access control policies across clouds, business units, environments, and apps. And they can choose to tap continuous monitoring for real-time alerts of data exposures, policy violations, and unauthorized access attempts. 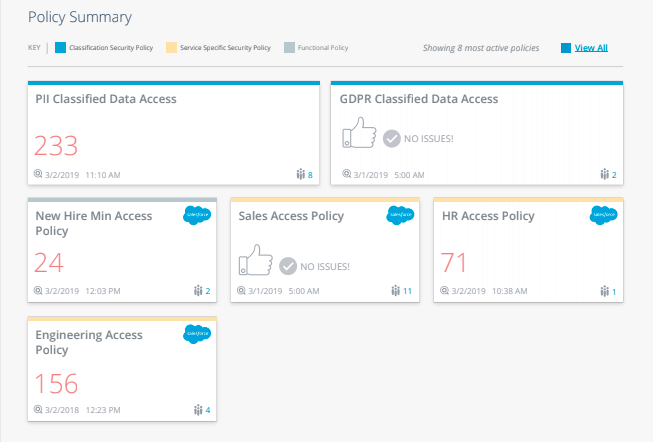 AppOmni also offers compliance tools that allow managers to export access reviews and reports or classify data according to type and business requirements. Meanwhile, IT teams get a configuration management dashboard that lets them snapshot configurations and security policies, access profiles, and review (and approve) changes before they’re promoted to production.

AppOmni isn’t alone in the app management services market, which is anticipated to be worth $32.5 billion by 2024. Among others, it competes with Sqreen, which raised $14 million in April 2019 for its cybersecurity suite that helps developers monitor and protect web apps from vulnerabilities and attacks. But while AppOmni isn’t disclosing clients just yet, it says it currently protects “several” Fortune 500 organizations and associations from a “wide variety” of industry sectors.

“As more businesses rely on cloud services, each with hundreds of service configurations, SaaS applications will continue to be a main source of data breaches. We are excited to be part of AppOmni’s journey. The team is composed of industry veterans that come from some of the largest and [highest-profile] SaaS companies, where they gained unique perspectives on securing cloud applications,” said ClearSky’s Patrick Heim. “With a great deal of focus being placed on infrastructure cloud security, we strongly believe that risks in SaaS environments have been largely overlooked and that the AppOmni is uniquely positioned to uncover and manage them.”

$30k Deep In Student Debt, This Gen-Z Man Found A Way To Break Into Tech – Forbes

Edited Transcript of WDI.DE earnings conference call or presentation 18-May-17 11:00am GMT – Yahoo...