China’s renminbi weakened and stock markets in Asia-Pacific turned sharply lower after US-China trade tensions flared over the weekend and the White House clarified that Donald Trump’s only regret was not raising tariffs more.

On Monday morning, the offshore renminbi weakened as much as 0.7 per cent to Rmb7.1858 to the dollar, a new record low.

Japan’s Topix was down as much as 2.5 per cent in early trade while the Kospi in Seoul dropped 1.7 per cent and Australia’s S&P/ASX 200 fell 1.3 per cent. Hang Seng futures were down 2.4 per cent.

On Sunday, the White House clarified Mr Trump’s comments from earlier in the day, saying his reply to the media at the G7 meeting that he had had “second thoughts” on additional tariffs was “because he regrets not raising the tariffs higher”.

“There is an uneasy feeling that the very fragile negotiations are spiralling out of control,” ANZ analysts said in a note. The analysts adding: “The escalation suggests uncertainty will continue to weigh on global trade, industrial production and investment, with no sign of a resolution.”

Wall Street dropped sharply on Friday following the tariff increases with the S&P 500 ending the day down 2.6 per cent while the Nasdaq Composite shed a hefty 3.2 per cent.

Read More   ON Semiconductor beats by $0.06, beats on revenue

That fall was set to continue with S&P 500 futures pointing to a further 1.2 per cent drop when the market reopens on Monday.

Moves into perceived havens such as gold saw the yellow metal gain 1.3 per cent to a six-year high while the Japanese yen strengthened 0.4 per cent to ¥104.95 to the dollar. The yield on the 10-year US Treasury, which moves inversely to price, dropped as much as 5 basis points to the lowest since August 2016.

Elsewhere in currencies, the Australian dollar, which is seen as vulnerable in the trade war over its exposure to regional trade volumes, slid 0.6 per cent against its US counterpart.

Brent crude and West Texas Intermediate fell 1.5 per cent and 1.8 per cent respectively, dropping further after China included US oil in its list of goods to face further tariffs. 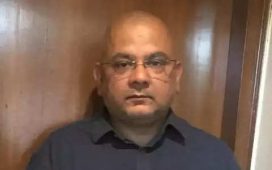