A senior Barclays executive accused of covering up a ‘culture of fear’ at the bank will be allowed to continue working in the financial services industry.

Andrew Tinney quit the bank after being accused of concealing an explosive dossier into working conditions within its wealth division.

It was alleged that Tinney had deliberately hidden the existence of the report from senior managers at the lender, and he was initially banned for life by the Financial Conduct Authority watchdog before appealing the decision. 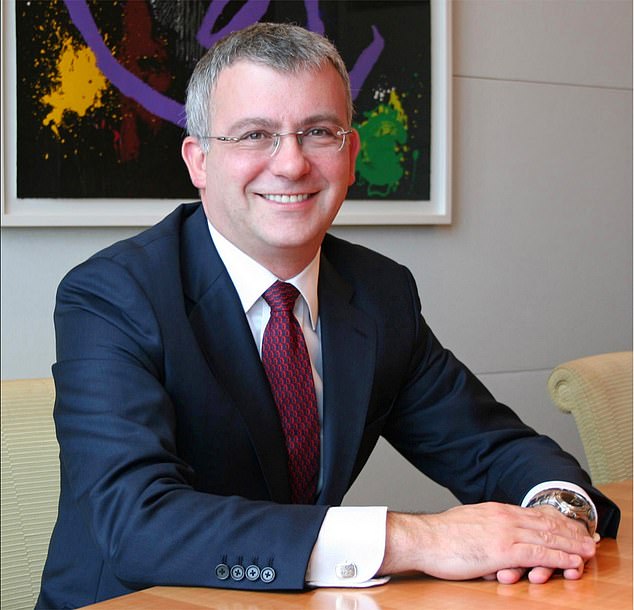 It was alleged that Andrew Tinney had deliberately hidden a report from senior managers at the lender, and he was initially banned for life before the ban was overturned

An Upper Tribunal judge found yesterday that Tinney had acted recklessly rather than maliciously when he drafted a briefing note for top Barclays bosses which made no mention of the damning dossier.

It reversed his lifetime ban and said that a public reprimand was sufficient punishment for the 53-year-old’s lapse – even though he was found guilty of failing to act with integrity.

Mark Steward, executive director of enforcement and market oversight at the FCA, said: ‘Senior management must be held to high standards of integrity which is the fundamental cornerstone of good conduct in trusted markets. Mr Tinney failed to act with integrity in one telling instance which is enough to justify this censure.’

The original report into working culture, specifically at Barclays Wealth’s American branch, was commissioned by Tinney while he was serving as chief operating officer at the private investments division.

Written by consultancy Genesis Ventures, it found that management had ‘created a culture of dominance and fear’ which was ‘high risk and actively hostile to compliance, and ruled with an iron fist to remove any intervention from those who speak up in opposition’.

Tinney (pictured) was the first recipient of this document but did not circulate it widely. A whistleblowing email was sent to senior management at the bank claiming a dossier about Barclays Wealth’s toxic culture was being hushed up. Tinney was asked to draft a briefing note for bosses in response but did not mention the Genesis report. When claims of a cover-up first emerged, the banker said he had shredded the study at his £5million mansion in Surrey in an effort to prevent it ever getting out.

However, he later said he had been mistaken, and found the dossier among his papers at home.

The Upper Tribunal also found that Tinney had made a misleading statement to his professional regulator, the Institute of Chartered Accountants in England and Wales, concerning the nature of his conduct. In this statement, he appeared to blame someone else for the fact that the report had never been entered onto Barclays’ computer systems.

He claimed a senior lawyer had said uploading the dossier could leave the bank open to lawsuits from people named and shamed in the report, a statement which was later found to be untrue.

Tory MP Kevin Hollinrake, co-chairman of the Parliamentary group on fair business banking, blasted the decision. ‘While the regulatory environment leads people to believe there’s a significant chance they will face no action, then people will continue to do the wrong thing,’ he said.

But a spokesman for Tinney said the FCA went after the wrong person, and that the former banker was delighted the Upper Tribunal recognised he did not mislead the watchdog.

Tinney’s lawyer Harvey Knight said: ‘Put bluntly, Mr Tinney is free to work again in the financial services industry in any role. This is telling. The FCA has serious questions to answer about why it decided to pursue this case.’

Contrary to claims by the FCA, Tinney did not deliberately or recklessly make false or misleading statements about the existence of the document in representations to the New York Federal Reserve Bank, the tribunal added.

US stocks retreat from record highs

Petrobras says it is two years away from making renewables push

Tesla has a huge incentive to deploy self-driving tech. But is the world ready?...

Pets at Home groomed over 27,000 dogs in the week before Christmas

Boris boost or a festive flop? Test your memory of business 2019