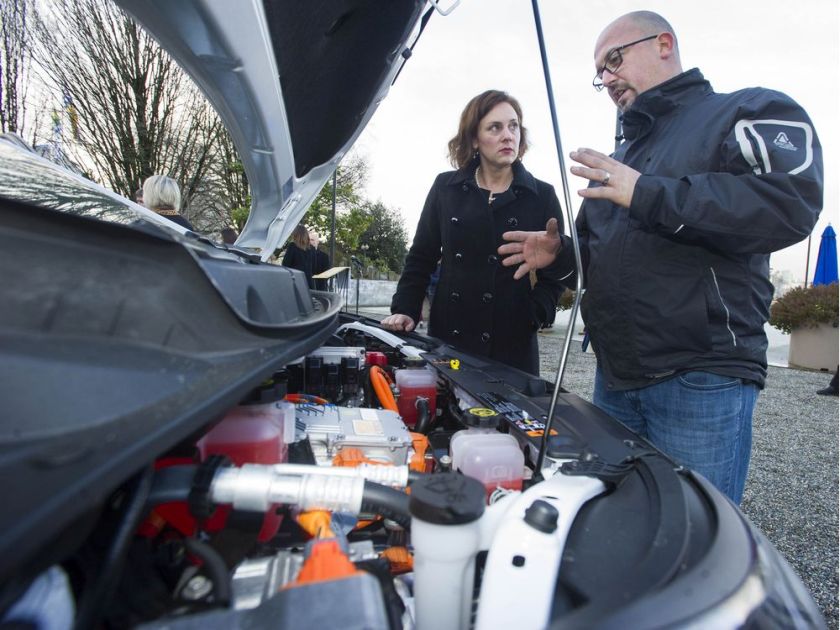 Automotive technician Manoli Paterakis had been working on internal combustion engines at the city of Vancouver for two decades when the chance came to be trained to maintain and repair the city’s growing electric fleet. The choice was easy, he says.

“That’s where the future is taking us, right?” he said Wednesday. “You have to stay up with the technology to be successful in this career.”

Paterakis committed to 40 hours of training at a new BCIT pilot program, plus some additional dealer-specific work. Safety is a key consideration, he said, pointing to orange high-voltage cables in a Chevrolet EV at a news conference. But the vehicles are reliable and fun to work on, and even swapping out their large lithium-ion batteries isn’t much of a hassle, he said.

On Wednesday, the B.C. government announced that the B.C. Institute of Technology pilot program — run in partnership with the City of Vancouver, and completed by Paterakis and 11 other Red Seal mechanics — had successfully concluded. The training will be available to the public, starting early next year, as a part-time studies course at BCIT.

The program was paid for with $325,000 from the government’s CleanBC strategy to meet emission targets, which includes a 2030 target of 40-per-cent emissions reductions below 2007 levels and for all new light-duty vehicles sold in the province to be zero-emission by 2040.

“It was so successful, this pilot, that we’re now ready to roll this out provincewide and give people all over British Columbia the opportunity to train so that they can maintain and repair the cars of today and into the future,” said Michelle Mungall, minister of energy, mines and petroleum resources.

Mungall said the completion of the pilot couldn’t have come at a better time.

“We thought we’d reach 10 per cent of new car sales being electric vehicles by 2025, ” Mungall said. “We’re projecting to be five years ahead of schedule.”

Amy Sidwell, manager of the city of Vancouver’s fleet, said the training supports two of the city’s climate emergency goals, transitioning to 100 per cent renewable energy sources before 2050 and ensuring half of kilometres travelled on the city’s roads are by zero-emission vehicles. The city’s 120 electric vehicles are one of the largest municipal electric fleets in Canada.

“The condition of our fleet is extremely important to us and to the operations of groups that use these vehicles throughout the city every day, so having our staff trained in the maintenance of these vehicles is critical,” Sidwell said.

Paterakis said that with major auto manufacturers such as GM, Daimler and Volkswagen planning to stop production and development of internal-combustion engines, he anticipates his new training to be in high demand at dealerships and independent garages, and for government and business fleets.

In addition to future-proofing his career, Paterakis is helping fight climate change by keeping the city’s electric vehicles on the road.

“Anything that we can do to reduce our carbon footprint is a step in the right direction,” he said.

—With files from Jennifer Saltman

Berlin’s Tech Scene Is Exploding. But Will These Young, Wealthy Elites Ever Start Buying...

The new cars most vulnerable to keyless theft as popular models are rated ‘poor’...

The electric vehicle charger designed in the inventor’s grandfather’s barn in Suffolk gets £13m...