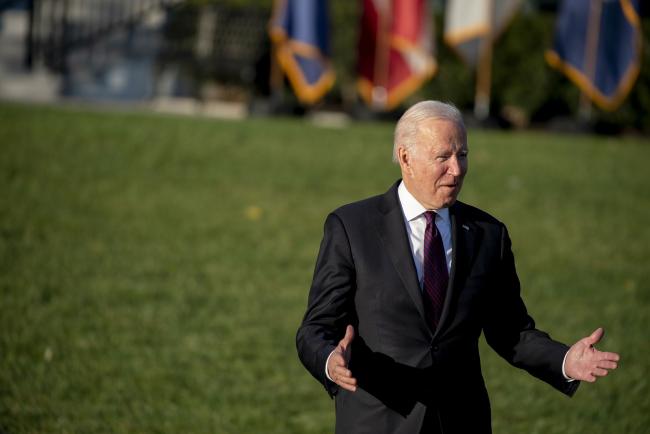 © Bloomberg. Joe Biden arrives to an Infrastructure Investment and Jobs Act signing ceremony on the South Lawn of the White House in Washington, D.C., on Nov. 15. Photographer: Stefani Reynolds/Bloomberg

(Bloomberg) — President Joe Biden will seek to reverse his slumping popularity as he travels to New Hampshire on Tuesday — part of a nationwide campaign to promote $550 billion in new infrastructure spending.

Biden will give a speech at a bridge over the Pemigewasset River that’s among the state’s list of “structurally deficient” crossings, a day after signing the infrastructure legislation that cleared Congress earlier this month.

Biden is counting on the bill to revive his political fortunes as his poll numbers sag amid concern over inflation, legislative gridlock and the lingering Covid-19 pandemic. He and top administration officials are fanning out around the country to champion the measure.

While passage of the bipartisan infrastructure bill is a potential turning point, the fate of other half of Biden’s domestic agenda remains unclear.

“My message to the American people is this: America is moving again,” Biden said at the White House on Monday. The law “is proof that despite the cynics, Democrats and Republicans can come together and deliver results.”

New Hampshire is a swing state, and incumbent Maggie Hassan is among the Senate Democrats who may be facing competitive contests next year. Democrats are at risk of losing their narrow majorities in both chambers in those midterm elections.

Inflation continues to hurt Biden’s standing with voters. U.S. consumer prices rose last month at the fastest annual pace since 1990, cementing high inflation as a hallmark of the pandemic recovery and eroding spending power even as wages surge.

A Washington Post-ABC News poll, taken after the infrastructure bill passed the House but before it was signed, found Biden had a 41% approval rating, down from 44% two months earlier and 50% at the end of June. Just 39% of people approved of his handling of the economy, the poll found.

Biden has touted the infrastructure bill as a measure that will ease bottlenecks driving inflation over the long term, such as at ports, as Republicans seize on the issue to oppose his agenda over fears it will further push up prices.

Democrats continue to haggle over Biden’s other major legislative package, which includes social programs and tax changes that leaders aim to pass through reconciliation, an approach that doesn’t require Republican votes. The non-partisan Congressional Budget Office’s estimate of the bill is due this week, and threatens to delay a planned House vote amid signs that the administration’s revenue projections may fall short.