A car with a jet engine built by Rolls-Royce, which is intended to shatter land speed records, has begun tests in the South African desert.

The Bloodhound supersonic car reached a top speed of 334mph during tests this week.

Scroll down for video. 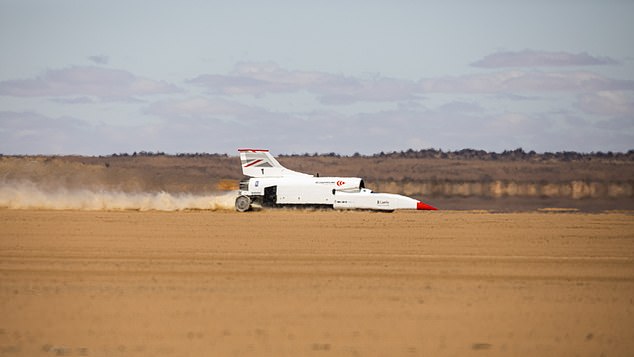 Mr Green will also be driving the Bloodhound this time around and is hoping to beat his own record, promising an ‘assault’ on the benchmark in 2020.

Powered by the engine of a Eurofighter Typhoon fighter jet, the team hopes Bloodhound will be able to reach faster speeds by inching up 50mph incrementally with each run.

The EJ200 jet engine was partly developed by Rolls-Royce and the car will produce 135,000 thrust horsepower, equivalent to more than 150 Formula One cars. 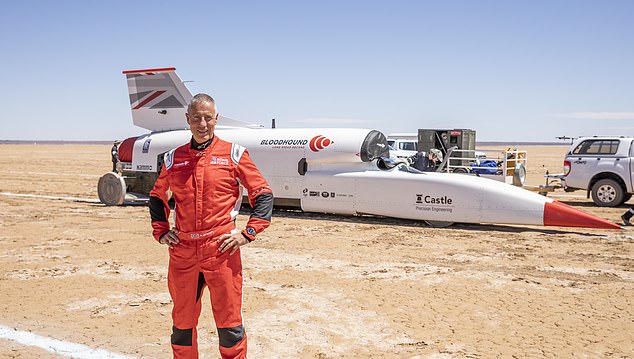 Andy Green will also be driving the Bloodhound (pictured) this time around and is hoping to beat his own record, promising an ‘assault’ on the benchmark in 2020

Bloodhound LSR is undergoing the tests in preparation for the 2020 or 2021 attempt at the very flat mud and salt-pan of Hakskeenpan in the South African desert.

If it succeeds, designers hope to push the car towards an unprecedented 1,000mph in the future.

The first run was attempted on October 25 and reached 100mph, the second 200mph and the third and most recent attempt hit 334mph – the third run marked the first time the afterburner in the car’s jet engine kicked in, reports Motorsports Magazine.

What are the specifications of the Bloodhound car?

Speed: The car will attempt to beat the 763mph land speed record next year. It is hoped it could one day reach 1,000mph

‘There was strong crosswind gusting at over 15 mph and we’ve established that this is pretty much the limit for running in the car.

We’re happy because this was a successful test, now we’re ready to progress on to higher speeds.’

A 10-mile desert racetrack has been set up in what organisers say is the ‘largest area of land ever cleared by hand for a motorsport event’.

Funded by South African authorities, local people have have moved some 16,239 tons of rock from 237million square feet of dry lakebed.

Bloodhound staff can lay out as many as 25 individual tracks side by side, as the car will break up the surface when it travels at extreme speeds.

The 7.5-ton car was dissembled and transported via air freight to South Africa to limit any knocks and bumps which may disturb its precise tuning – before being rebuilt in the desert. 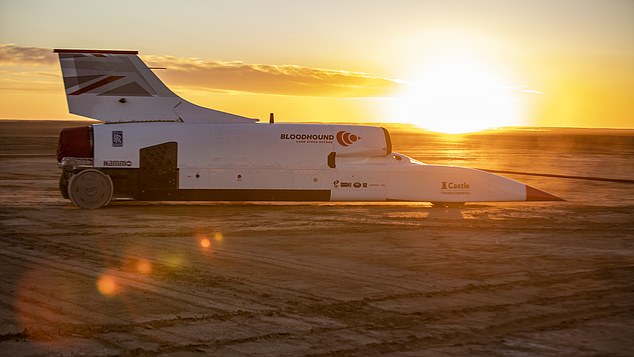 Bloodhound staff can lay out as many as 25 individual tracks side by side, as the car will break up the surface when it travels at extreme speeds

During the tests data will be collected by 192 pressure sensors measuring airflow on the car – as the car accelerates and after as wheel brakes, airbrakes and drag parachutes attempt to slow the car.

This will allowing analysis of how the car reacts under different forces and allow adjustments before the record attempt.

Test runs described as ‘low-speed’ tests – which nonetheless reached 200mph – were previously carried out in Cornwall in 2017.

For the record attempt the Bloodhound will also be fitted with a monopropellant rocket as well as the jet engine. 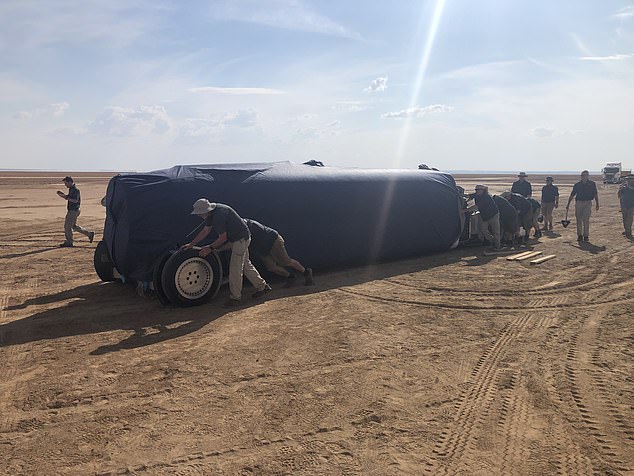 The 7.5-ton car was dissembled and transported via air freight to South Africa to limit any knocks and bumps which may disturb its precise tuning – it was then re-built in the desert 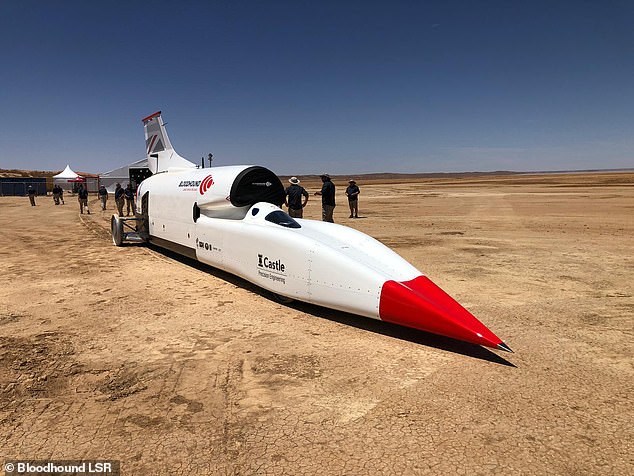 Unveiling: The British-built Bloodhound car, powered by the engine of a Eurofighter Typhoon fighter jet, displayed in the Hakskeenpan desert

Bloodhound LSR engineering director Mark Chapman told Motorsports Magazine: ‘Transforming Bloodhound from a runway spec car to one capable of reaching speeds in the transonic range on the desert racetrack has been no small task.

‘The team of engineers, craftsmen, fabricators and technicians have pulled out all the stops to upgrade the car in just a few months since the rescue from administration last December.

‘After many years in preparation, we can’t wait to get out to the Hakskeenpan and let Bloodhound off the leash to see just how it performs.’

The project suffered a setback last year when the company behind it went into administration. 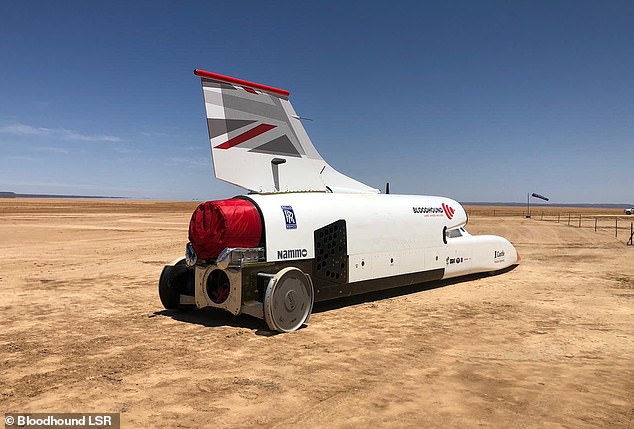 Desert testing: The car is hoped to reach speeds of up to 500mph as it prepares to take on the 763mph record set by former fighter pilot Andy Green in 1997 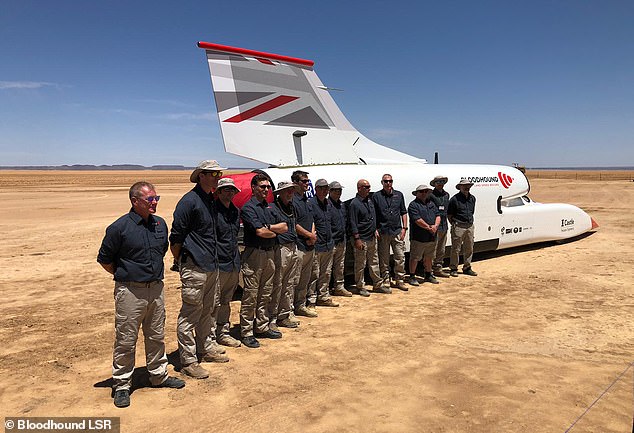 But it was saved from the scrapheap when British entrepreneur Ian Warhurst bought the business in December 2018.

‘The wheels have been designed specifically for this desert lake bed, but it will still be vital to test them at high speeds before making record speed runs,’ he explained earlier this year.

Record holder Mr Green said: ‘After years of work to prepare the car, and following almost a decade of preparation of our desert track by the Northern Cape government, we’re delighted to finally be here.

‘The next few weeks will allow us to test the car and train the team, ready for our assault on the outright world land speed record next year.’

1963: American Craig Breedlove sets the first record with a jet-powered car, reaching 407mph, although it was not ratified as the official record until later

1997: Andy Green breaks the record twice in the same year in Nevada’s Black Rock Desert, reaching the current benchmark of 763mph in October that year while driving ThrustSSC