As Lee Jasper walks around the streets of Brixton, south London, he shakes his head. On Coldharbour Lane, once lined with shops selling reggae records and West Indian food, he gestures at a recently established restaurant. It offers fashionable “small plates” of Sicilian food for between £6 and £11 each.

The business is operating in what used to be the heart of Britain’s African-Caribbean community, a few metres from where some of the most violent riots in Britain’s history broke out 40 years ago this year. Jasper, an often controversial activist for black people’s rights, looks at the restaurant and sighs, “Great but . . . ” before tapering off.

The arrival of new restaurants and other establishments with a mainly middle-class white clientele reflects a cultural shift in large parts of Brixton in the four decades since the events of April 1981 (which locals now often call an “uprising”) drew attention to the area’s deep-seated racial tensions.

The past few years have brought a surge of investment and development that has produced what Jasper calls “continual demographic change” — a gradual pricing-out of both black residents reliant on private-sector housing and of black-owned businesses.

The changes have sparked an intense and often angry debate about how far planning rules and landlords should be obliged to manage change and preserve businesses, homes and other facilities for black people. The arguments are similar to those raging in recent years in urban areas across the industrialised world, from Berlin to Brooklyn.

They have a particularly sharp edge in Brixton because it has been the intellectual and spiritual centre of the UK’s Caribbean population since shortly after the first organised group of migrants from the Caribbean came to the UK on the Empire Windrush in 1948. Many of the migrants were initially housed in nearby Clapham and came to Brixton because it had the nearest labour exchange.

In 2015, these tensions culminated in an anti-gentrification protest that led to the storming of Lambeth Town Hall and to substantial damage to a branch of Foxtons, an estate agents’ chain seen by some as symbolic of the neighbourhood’s increasing unaffordability.

Cecil Reuben, a reggae music promoter who has lived in Brixton since arriving in the UK from Jamaica aged 15 in the early 1970s, says the area has “lost its culture”. “The culture it’s got now is a kind of different culture,” Reuben says, sitting outside the Hootananny, a pub and entertainment venue where he organises concerts and provides the security staff. “It’s middle-class white people — a lot of rich kids coming from other areas now to Brixton.”

Many newcomers, however, insist that they represent merely the latest of multiple overlapping waves of migration. They say they want to enrich the area, not quash its distinctiveness.

Margaux Aubry, co-founder of Naughty Piglets, a restaurant serving high-quality modern British cooking from the site of a former chicken shop on Brixton Water Lane, says she and her business partner Joe Sharratt decided to locate their business in Brixton because of its distinctive atmosphere.

The bistro, which opened in 2015, has won an entry in the Michelin Guide, the prestigious restaurant handbook. While Sharratt has always lived in south London, Aubry, like many of those who have founded businesses in the area in recent years, is herself an immigrant; she was born in Lyon.

“We’re not here to make Brixton worse or better,” Aubry says, sitting cross-legged at a table in the back room of the compact restaurant. “We love Brixton and decided to live and make a little food and natural wine scene within Brixton.”

At the heart of the discontent is a sense that the recent changes risk eroding the achievements of Brixton’s Caribbean immigrants in the postwar decades. People from the West Indies came to an area that had, after rapid, middle-class development in the 1840s-60s following the arrival of rail connections to central London, grown depressed and run down. Brixton was attractive partly because of the abundance of robust Victorian houses that could be readily turned into affordable accommodation for large numbers of people.

Lincoln Romain, who grew up in a West Indian home in Loughborough Junction, on Brixton’s fringes, recalls the sense of energy on Coldharbour Lane when he first worked there in 1989 for Brixton Cycles, a workers’ co-operative (now on Brixton Road) of which he is now the longest-standing member.

“There was a kind of excitement, a nervous excitement,” Romain says of Coldharbour Lane. “Some of the summer days were, like, the best — everybody out on the pavement just getting on.”

After a groundbreaking inquiry, Lord Scarman, a High Court judge, blamed the riots of April 10-12 1981 on the heavy-handed policing of impoverished black young men by London’s Metropolitan Police. Across England, forces started to put greater emphasis on “community policing” and understanding better the people they were policing.

However, there were subsequent disturbances in the area in 1985, after police shot and injured Cherry Groce, having burst into her flat. In 1995, after Wayne Douglas, a 26-year-old black man, collapsed and died in custody at Brixton police station, there was further trouble. Most recently, the area experienced some unrest in 2011 in the wave of disorder that followed the fatal police shooting of Mark Duggan in Tottenham, north London.

In the 10 years to January 2021, the average property price in Brixton rose 76 per cent to £578,368, according to data from Kinleigh Folkard & Hayward, a London estate agent. In Brixton Hill, to the south-west, the average price more than doubled to £599,198.

But the rising tide of property values and increased investment has lifted few boats in the least advantaged bits of the area, according to Ira Campbell, co-chief executive of the Marcus Lipton Youth Club on the Loughborough Estate in north-east Brixton. Its 1950s council-owned high-rises still look poorly maintained.

Local young people feel dispirited when they see middle-class families paying £1m for houses on the same streets where they live, according to Campbell. “A lot of the people we work with, they may have great aspirations but when they see the doors are shut to them — they would never afford the houses where they live — it makes it a lot harder,” Campbell says.

Yet a visit to the Maremma restaurant on Brixton Water Lane is a reminder that the area has always been home to a mix of classes and races and that the changes are often complex. It operates on the site occupied from 1975 until 2018 by the Montego Inn, a Caribbean restaurant run by Bruce Stennet, originally from Jamaica.

Dickie Bielenberg, who started Maremma with his wife Alice Staple, grew up near Brixton and recalls encountering smouldering wreckage and overturned cars as a 13-year-old in 1981 taking the bus to Dulwich Prep school. “I remember very, very clearly the sense of incredible injustice that I felt at that time”, he says, “when I was told by my parents that this was due to the ability of the police just to stop anybody based on nothing particular.”

Maremma rents its premises from Stennet, now in his eighties, and Bielenberg purchases what he can locally. That includes bread from the Caribbean-owned Aries Bakehouse on Acre Lane.

In addition, Bielenberg includes on diners’ bills an optional £1 “community charge” that goes to local charities — including the Marcus Lipton centre. There are “huge, huge” numbers of people coming from outside Brixton to spend money in restaurants and, while some businesses ensure that part of the proceeds goes to local people, many do not, he says.

Hondo Enterprises, the investment company that has owned many of the prime sites in central Brixton since 2018, insists that it, too, is trying to nurture black people’s entrepreneurship. Hondo has faced criticism because of the changed mix of businesses in Brixton’s market arcades, which once traded almost exclusively in fresh produce for consumers with Caribbean roots.

Diana Nabagereka, general manager of Brixton Village, one of the market properties, points out that the market has an official preservation listing because of its importance to Britain’s African-Caribbean population. As a result, Hondo has agreed to protect the market’s traditional sellers of fresh produce by commiting to turn over no more than half its space to restaurants and bars. “It means there will always be great produce — that diversity to allow for old Brixton to still feel the space is theirs,” says Nabagereka.

Meanwhile, the groups of African-Caribbean men who still appear drinking, smoking and listening to reggae on summer evenings around Acre Lane are a reminder that the area remains ethnically and socially mixed. Pushed to the Margins, a report on gentrification published in May by the Runnymede Trust, a race-relations think-tank, and Class, the centre for labour and social studies, put Lambeth only fifth among London boroughs for its rate of gentrification.

The report made the judgment by calculating factors such as the rate of churn in households and the decline in the number of non-white households from the start of 2010 to the end of 2016.

Adam Almeida, the report’s author, attributes the relatively slower pace of upheaval in Lambeth partly to the council’s failure so far to attempt the type of wholesale redevelopment of council-owned housing in central Brixton that has taken place in some other parts of inner London. Such projects are often accused of driving out many of the original residents or treating them poorly.

FT subscribers can sign up for our weekly email newsletter containing guides to the global property market, distinctive architecture, interior design and gardens. Sign up here with one click

Still, Lee Jasper’s walk around Brixton illustrates that there are genuine pressures on black-owned businesses. As he turns off Coldharbour Lane on to Atlantic Road, he sees a sign announcing the closure of The Baron, which claimed to be Brixton’s longest-surviving independent retailer, selling clothes to suit the tastes of older African-Caribbean men for more than 50 years.

“Brixton is known for its diversity,” says Jasper, who first moved to the area in 1985. “That’s the goose that laid the golden egg and it’s being driven out.”

Ira Campbell, who was 11 at the time of the riots, acknowledges that areas such as his have seen some improvements since 1981. “Forty years later, you’d expect some change,” he says. But he would like his community to benefit far more from the prosperity that is just around the corner. “We still have a lot of institutional racism,” he adds. 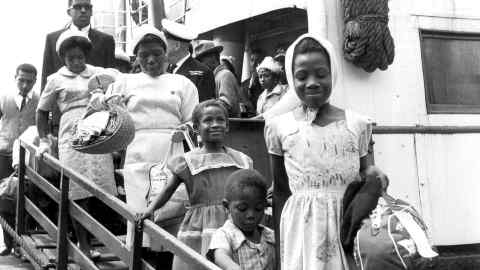 Campbell insists, though, that his area’s young people will seize the new opportunities if allowed. “We want to keep on being optimistic,” he says. “And keep hoping that things will get better and fairer.”