The latest version of the cryptocurrency-powered Brave browser has added support for cryptocurrency wallets, giving its users more control over the BAT tokens they earn viewing ads.

According to a thread posted on BAT’s official subreddit, the Brave Nightly version of the browser – one that isn’t stable and is used by developers to test new features – now supports various cryptocurrency wallets, including MetaMask.

The new version, according to the thread, allows users to connect cryptocurrency wallets to their browsers, even though transactions first have to undergo know-your-customer (KYC) checks via Uphold, a crypto wallet and exchange Brave partnered with. 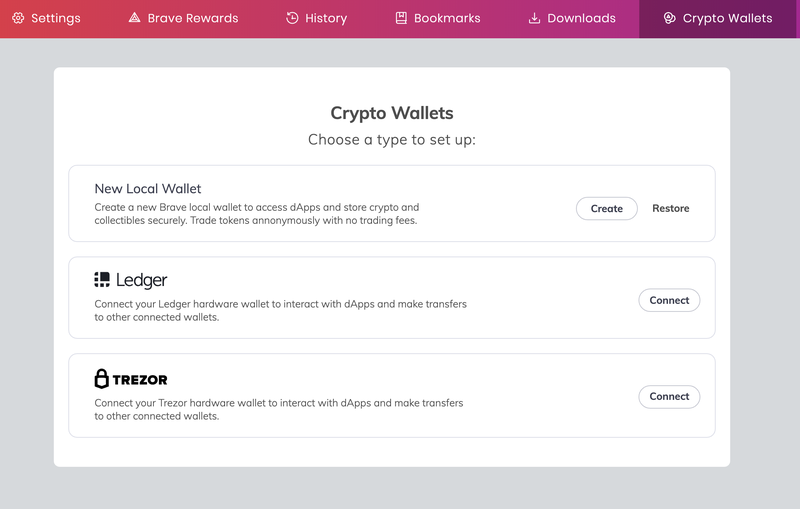 The cryptocurrency-powered browser’s users have for long complained about Brave’s lack of support for Ethereum wallets like MetaMask, MyEtherWallet, and more. Brave reportedly didn’t directly add this feature in an attempt to help its BAT token be used to tip content creators on the web.

The Basic Attention Token, an ERC-20 token sold in Brave’s initial coin offering, is used by advertisers to get to users, who in turn earn a percentage of advertising revenue for simple seeing the ads. By default, Brave distributes users’ BAT holdings to content creators according to the attention they give them, although users can choose to hold their tokens.

Speaking to CoinDesk Brave’s co-founder and CEO Brendan Eich, stated KYC checks are still a top priority for the firm:

[Brave] can’t let fraud bots with Ledgers or Trezors take us to cleaners, and we have to avoid going to jail if some Office of Foreign Asset listed evildoer were to take out BAT that way.

Eich added the BAT is complaint via Uphold and that he’ll “defend that decision readily by citing our growth numbers, publishers, and users.” The company’s move to add cryptocurrency wallet support now, he said, isn’t meant to undercut regulators but to lead the community by supporting more experienced crypto users.

The CEO noted that Brave has “no illusions that raw crypto is not for most users” as it is “unusable and way too technical.” Per Eich, these more experienced users may be able to collaborate with Brave to go beyond what the company can do.

The move comes shortly after it added untargeted ads for 21 new countries – including Poland, Argentina, Italy, Singapore, and Venezuela – to its Nightly version. The browser’s latest version also lets users withdraw their BAT tokens to Uphold.

Bring it On: SEC vs Telegram Court Battle is Today – Bitcoinist

South Korean Startup That Raised 29,000 ETH via ICO Is Shutting Down – CryptoGlobe