Eco-friendly Britons switching from red meat to chicken are inadvertently contributing to the deforestation of the Amazon, Greenpeace claims

Meat-free Monday, Veganuary and ‘flexitarianism’ are all recent initiatives to help Britons cut down on meat intake, reduce emissions and help the environment.

And a central theme for many people cutting meat from their diet is to start with a baby step — switch red meat for chicken.

But this move is inadvertently fuelling deforestation of the Amazon rainforest, Greenpeace claims.

The environmental charity claims 1.4 million hectares of land — an area greater than Northern Ireland  —  is needed every year to produce enough grain to feed the UK’s factory farmed chickens. 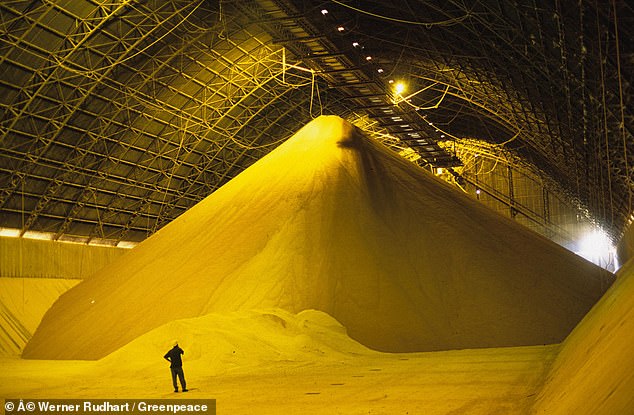 Pictured: Soy in a silo in Itacoatiara, Brazil that will be loaded on ships for export. Greenpeace claims 1.4 million hectares of land — an area greater than Northern Ireland — is needed every year to produce enough grain to feed the UK’s factory farmed chickens 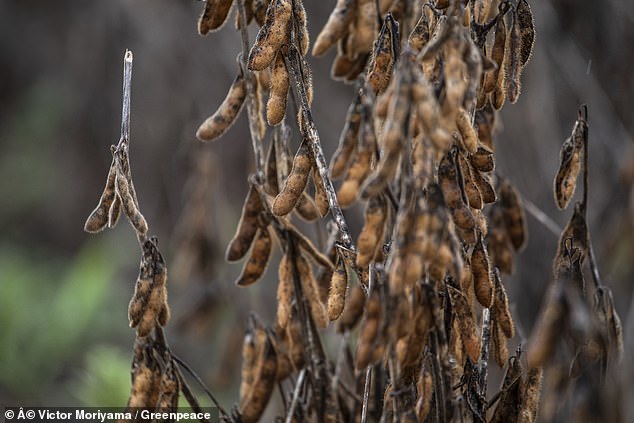 Greenpeace went to 23 leading UK brands and quizzed them about their chicken sales and soya usage.

None of the respondents were able to say with certainty the soya they used was deforestation-free.

A direct correlation between chicken consumption in the UK and deforestation in South America is not proven, but Greenpeace claims there is a definite link. 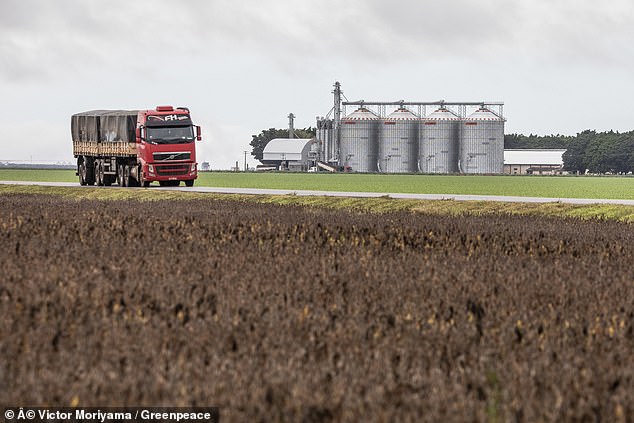 A direct correlation between chicken consumption in the UK and deforestation in South America is not proven, but Greenpeace claims there is a definite link as the soya farms (pictured) are expanding to meet rising demand in the UK 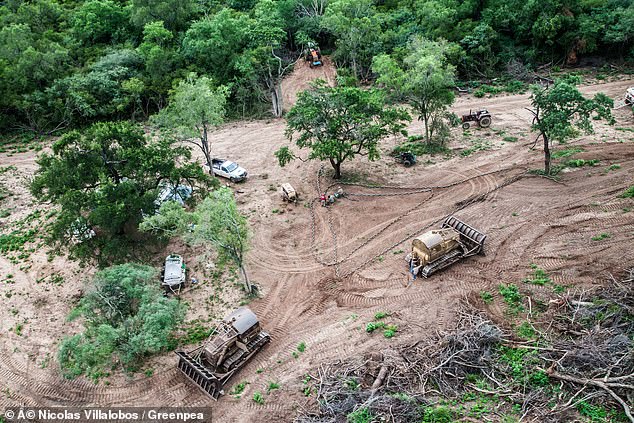 Deforestation in the Amazon (pictured) for logging and agriculture is decimating the rainforest. Greenpeace claims much of the soya produced for the UK’s factory farmed animals is coming from deforested areas

HOW DOES EATING MEAT AND DAIRY PRODUCTS HURT THE ENVIRONMENT?

Eating meat, eggs and dairy products hurts the environment in a number of different ways.

Cows, pigs and other farm animals release huge amounts of methane into the atmosphere. While there is less methane in the atmosphere than other greenhouse gases, it is around 25 times more effective than carbon dioxide at trapping heat.

Raising livestock also means converting forests into agricultural land, meaning CO2-absorbing trees are being cut down, further adding to climate change. More trees are cut down to convert land for crop growing, as around a third of all grain produced in the world is used to feed animals raised for human consumption.

As well as this, the nitrogen-based fertiliser used on crops adds to nitrous oxide emissions. Nitrous oxide is around 300 times more effective at trapping heat in the atmosphere. These fertilisers can also end up in rivers, further adding to pollution.

Overall, studies have shown that going vegetarian can reduce your carbon emissions from food by half. Going vegan can reduce this further still.

Its latest report, titled Winging it: How the UK’s chicken habit is fuelling the climate & nature emergency, it reveals Argentina, Brazil and Paraguay are the primary sources of more than three million tonnes of soya imported to the UK every year to feed factory farm animals.

‘But supermarkets and fast food restaurants are keeping them in the dark when it comes to the precious forests being destroyed to feed most of the chicken they sell.

‘What’s worse, instead of tackling the problem, they’re adding to it by pushing customers to buy more.

‘For too long the impact on our planet of growing crops for UK chicken feed have been overlooked.

‘A straight swap from beef to chicken effectively amounts to outsourcing emissions of our meat consumption from the UK to South America.

‘The simple truth is, we cannot continue to consume industrially-produced meat in the volumes we currently are. It’s why we’re calling on companies to set clear meat reduction targets and be transparent about where their animal feed comes from.

‘Soya imports represent 47 per cent of Europe’s deforestation footprint, compared to 14 per cent for pasture expansion for livestock and 10 per cent for palm oil.’

[Laura Ingraham Flips Out on Dem’s Issues About Coronavirus Reaction From ‘Anti-Science’ Trump: ‘You’re Turning This Into a Political Diatribe’] – gotech daily

Country diary: the gatherings at the bird feeder are anything but random

NASA bombshell: Agency forced to DELAY vital mission to find water back to 2023

‘Soulmates do not exist’: the surprising rise of wedding therapy

A technology for embedding data in printed objects – EurekAlert