A THIRD of high schoolers vape: CDC report reveals 6.2 million US teens use tobacco as e-cigarettes drive up rates of addiction

The number of US children and teenagers using tobacco has risen to 6.2 million, new Centers for Disease Control and Prevention data reveal.

Almost 5 million high school students identify as current tobacco users, up from 4 million last year, as do 1.5 million middle schoolers, up from 870,000 in 2018.

E-cigarettes are driving the increase, officials say: 27.5 percent of high schoolers vape, up from 20.8 percent in 2018, as do 10.5 percent of middle schoolers, up from 4.9 percent last year.

It is the second year in a row the CDC has recorded an increase in young people using tobacco, after years of progress driving down figures or keeping them stagnant.

Lamenting the figures, CDC director Dr Robert Redfield said it confirms there is an ‘epidemic among our youth.’ 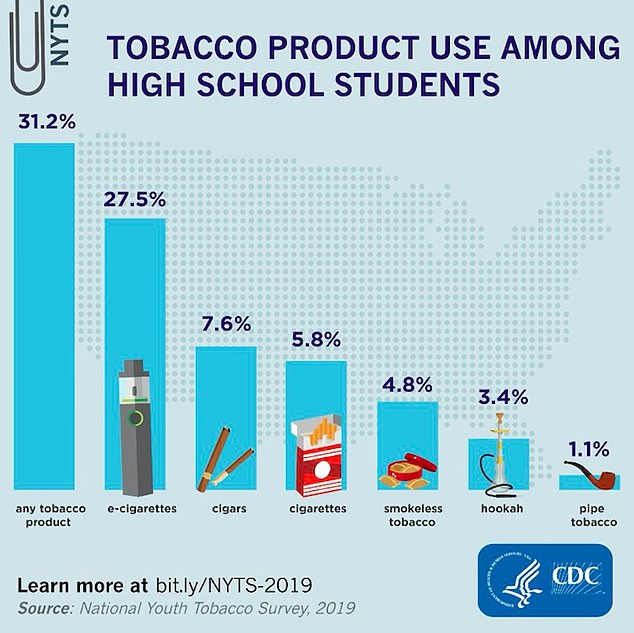 A third of high school students use tobacco, most of whom use two or more products. But for the majority, one of those products is an e-cigarette, according to a new CDC survey

‘Our nation’s youth are becoming increasingly exposed to nicotine, a drug that is highly addictive and can harm brain development,’ Dr Redfield said.

‘Youth use of any tobacco product, including e-cigarettes, is unsafe. It is incumbent upon public health and healthcare professionals to educate Americans about the risks resulting from this epidemic among our youth.’

The report comes as states, school districts and teenagers file lawsuits against Juul Labs, the market leader in vaping products, which has become synonymous with vaping.

TEEN TOBACCO USE BY NUMBERS

Although 1 in 3 middle and high school students (2.1 million) said they use two or more tobacco products, officials point to the sudden rise of vaping among young people as a turning point in tobacco use.

Juul has been lambasted for its attractive commercials, featuring young people enjoying Juuls, and for selling flavored products, which officials say targets children.

Nearly 9 in 10 middle and high school students (22.9 million) said they were familiar with advertising of tobacco products.

In fact, almost a quarter (22.4 percent) of students who had tried e-cigarettes said they did so because ‘they are available in flavors, such as mint, candy, fruit, or chocolate.’

READ  What is Juuling, is it safe and how can you talk to your teens about it?

Asked about the danger of e-cigarettes, 28.2 percent of students thought that vaping was not harmful if it was only done intermittently.

‘We are fully committed to preventing children from using harmful tobacco products, including e-cigarettes, and will continue to develop policies that will achieve that objective as soon as possible,’ said Admiral Brett Giroir, M.D., HHS assistant secretary for health and acting FDA commissioner.

‘In addition, we will continue taking other actions to address this shocking epidemic of youth use, including aggressive enforcement and compliance efforts and evidence-based public education – which includes investing in campaigns to educate youth about the many dangers of e-cigarette use including addiction, behavioral disorders, and other health risks.’

Flu symptoms could be masking signs of coronavirus, docs warn

The Greatest Source of Life: Water

Coronavirus: Why the UK death count is an inexact science

Cancer symptoms: Feeling or being sick could signal this type of cancer

COVID 19: What is the Most In-demand Medical Equipment?

Being a coronavirus volunteer brings out my inner spy | Clare Allan

Being a coronavirus volunteer brings out my inner spy | Clare Allan

More calories burned when diet is low in carbs