Some Chilango burrito bond holders cash out their holdings as they opt for a 90% write-off on nearly £48,000 of investments

Some investors in the 8 per cent mini-bonds offered by stricken Mexican restaurant chain Chilango have decided to cut their losses, official documents show.

There were 14 bondholders who cashed out nearly £48,000 worth of investments for just a tenth of that.

The roughly 800 people who collectively poured £3.7million into Chilango’s ‘burrito bond’ fundraise between October 2018 and April 2019 were given the option before Christmas of either receiving 10p in every £1 they invested or swapping their mini-bond debts for debt-like shares, which promised returns sometime in the future. 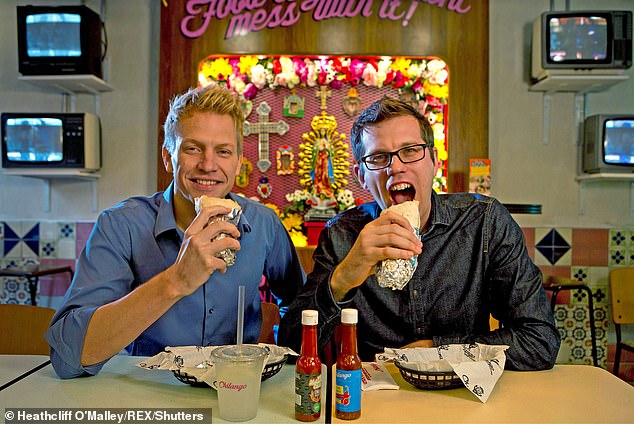 Cash out: Rather than risk not getting 8% returns, 14 holders of burrito bonds have elected to take just 10p in every £1 they invested – pictured, founder Eric Partaker and Dan Houghton

The choice was one the measures the financially troubled restaurant chain implemented in a bid to get a handle on its debts, which stood at £6.8million at the end of last October.

At the start of January, Chilango successfully implemented a company voluntary arrangement.

This is a rescue plan which proposed cutting rents by 40 per cent on three of its 12 restaurants and exiting leases on four unopened sites, as well as the move to clear the debt from its balance sheet by transferring it into equity.

Documents filed to Companies House revealed 14 bondholders who collectively invested £47,500 in the company’s mini-bonds voted to cash out their holdings for a total of £4,750, losing 90 per cent of what they had invested as little as eight months beforehand.

Three of those who elected to receive 10p in the £1 were investors who poured in £10,000, which made them eligible for a black card entitling them to one free meal a week at Chilango during the mini-bond’s four-year term.

It is possible these investors decided they would rather cut their losses than vote for the debt-like shares, which pledged to pay an 8 per cent dividend ‘when the directors consider it appropriate’, and ‘if there is available cash.’

Investors were told in adverts for the burrito bonds they were putting their money into a company on the rise, and one which was an established bond issuer ‘with a perfect payment history’.

The company had just completed a £2.1million mini-bond fundraise, in which it had made all the 8 per cent interest payments over the four year term.

However, the chain’s official restructuring documents revealed those interest payments were partly made after the chain used its second burrito bond fundraise to pay back investors in its first one.

According to the latest documents, burrito bond holders who collectively invested £2.8million will see their mini-bond debt transferred into the new share class.

The filings also revealed the chain owed over £955,000 to the taxman at the time of the CVA.

It voted against the measure, which would have likely sent the company into administration had enough creditors done the same.

HMRC declined to specify the nature of Chilango’s debts to it, though the chain previously had to raise £1.7million to settle a £1.3million bill over VAT on guacamole and other menu items.

It told us in a statement: ‘HMRC make sure that businesses, just like everyone else, pay all the taxes due under UK law and we don’t settle for less.’

The BBC Pension Fund was also owed nearly a quarter of a million pounds by Chilango.

Though it was not a share or bondholder, the public broadcaster’s workplace pension scheme owns one of the sites where Chilango was a tenant.

What you need to know before buying into bonds

* Any investor buying individual shares or bonds would be wise to learn the basics of reading a balance sheet. Read a guide here.

* When looking at bonds, research all recent reports and accounts from the issuer thoroughly. You can find official stock market announcements including company results on This is Money here.

* Check the cash flow is healthy and consistent. Also look at the interest cover – the ratio which shows how easily a firm will be able to meet interest repayments on its debt. This is calculated by dividing earnings before interest and taxes (known as EBIT) by what it spends on paying interest. A guide to doing investment sums like this is here.

* It is very important to find out what the bond debt is secured against, and where you would stand in the queue of creditors if the issuer went bust. This should be included in the details of the bond offer but contact the issuer direct if it is unclear.

* Consider whether to spread your risk by buying a bond fund, rather than tying up your money with just one company or organisation.

* Inexperienced investors who are unsure about how retail or mini-bonds bonds work or their potential tax liabilities should seek independent financial advice. Find an adviser here.

* If the issuer is a listed company, before you decide whether to buy it is worth checking the dividend yield on the shares to see how it compares with the return on the bond. Share prices, charts and dividend yields can be found on This Is Money here.

* Investors should bear in mind that it can be harder to judge the risk involved in investing in some bonds than in others – it is easier to assess the likelihood of Tesco going bust than smaller and more specialist businesses.

Housebuilder dividends to soar by £1billion