The number of families claiming child benefit has plunged by 44,000 to 7.28million over a year, putting more parents at risk of a poorer old age.

Parents – mostly mums – can end up tens of thousands of pounds worse off in retirement because not claiming deprives them of valuable credits towards their state pension.

This is Money is campaigning to get the Government to hand back all lost credits when parents belatedly claim child benefit. It currently refuses to backdate them for more than three months. 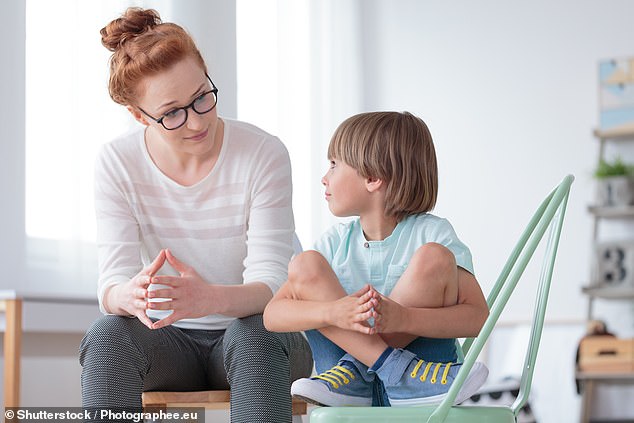 Child benefit: Many parents don’t claim because they aren’t entitled to the payments, and don’t realise the important link to their future state pension

Child benefit claims have fallen by well over half a million since 2012, according to new HMRC statistics covering the period up to August 2019.

The tax office attributes this sharp decline to new rules launched in 2013, known in official jargon as the High Income Child Benefit Charge, which are deterring parents from signing up.

HMRC says it urges families to sign up for child benefit, and forms are included in bounty packs handed to new parents. Read its full statement below.

Many parents don’t claim child benefit because they aren’t entitled to the payments.

And HMRC research has revealed they are almost entirely in the dark about its link to the state pension, and that they could end up worse off in retirement as a result of not claiming. 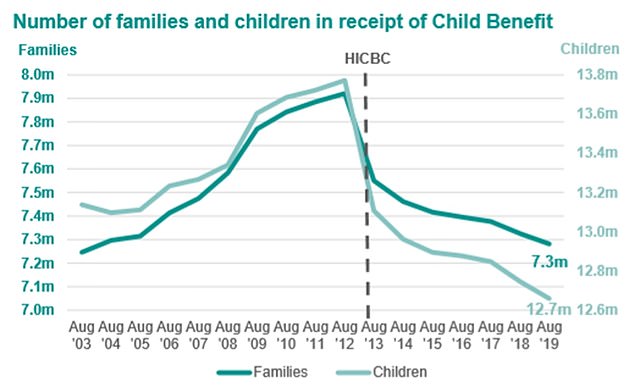 Sharp decline: Child benefit claims have fallen by well over half a million since 2012, according to new HMRC statistics

Steve Webb, a former Pensions Minister and now a partner at consultant LCP, said of the latest drop in child benefit claims: ‘This is yet more bad news for the future of women’s pensions.

‘The large majority of people who claim child benefit are mothers, and when child benefit claims drop, it is mainly women who lose out.

How much state pension do parents stand to lose?

Each annual National Insurance credit is worth 1/35 of the value of the state pension – around £251 per year or £5,020 over the course of a typical 20-year retirement.

So those who had a child in 2013 and have not signed up for child benefit since then stand to lose £35,000 worth of credits, to date.

High earners who want to avoid filling in tax returns and paying back child benefit, but who still want the valuable state pension credits, can tick a box on the form that opts them out of receiving the payments but signs them up for credits only.

HMRC says the number of families opting out of payments in the year to August 2019 rose by 7 per cent or around 36,000 to 582,000, the largest annual increase in recent years.

These families are not included in the overall child benefit claim figures.

‘Those who have started a new family since the rules changed in 2013 and have not made a claim, risk losing out on vital National Insurance credits towards their state pension.

‘Worse still, government rules only allow three months of backdating, so some of these credits will be lost for good unless the rules are changed.’

Webb called again for the Government to change the rules on backdating so those who have already missed out can get what they are entitled to.

HMRC argues that backdating further than three months would make it harder to verify evidence, since entitlement relies upon being responsible for a child each week.

But this stance is dubbed ‘ludicrous’ and ‘a nonsense’ by critics, who believe in the majority of cases it will be obvious parents were in charge of their children at the times in question.

One mum who lost two and a half years of credits told us she has plenty of evidence proving she was responsible for her daughter ever since her birth.

This includes correspondence with her employer about maternity leave and with the family’s GP, records from her daughter’s nursery, and records of attendance at baby and toddler care sessions and swimming lessons.

Meanwhile, families who had a first child in 2013 and have not claimed for seven years to date will have a bigger hole in their state pension record with every passing year, unless they realise and sign up for child benefit or the Government relents and allows full backdating of credits.

And more new parents unwittingly join their ranks each year, as highlighted by the latest figures.

Have you lost state pension by not signing up for child benefit or filling form in wrong?

If this has happened to you, contact tanya.jefferies@thisismoney.co.uk and tell us your story.

Some will make up lost ground if they go back to work and rebuild their National Insurance record.

But Steve Webb estimates that tens of thousands of parents, nearly all of them women, will end up with a smaller state pension unless the Government changes its mind on backdating.

Emma Maslin, who lost four years of credits towards her state pension, has been raising awareness of the problem on her blog for families, The Money Whisperer, and she also calls for full backdating in cases like hers.

She says: ‘These latest figures are so disappointing. I worry for all the other parents, and in particular mothers, like me who will have their state pension potentially impacted as a direct result of not registering for child benefit.

‘I was fortunate to uncover my mistake and correct it by registering and opting out of receipt. I only received backdated credits for the three months prior to my claim however.

‘Others who realise they needed to have registered down the track are also faced with the penalty of only receiving backdated credits for the three months prior to the claim.

‘Clearly there is a lot more work to be done by the Government to encourage everyone to register at the time of their child’s birth.’

Has your income fallen during the virus crisis?

You could be eligible for child benefit again if you have lost income during the current crisis.

Anyone earning £60,000 or slightly more who has stopped claiming child benefit, but then loses 20 per cent or more of their income under the government’s job retention scheme could qualify again, points out Royal London. Those on £50,000-£60,000 would also benefit. 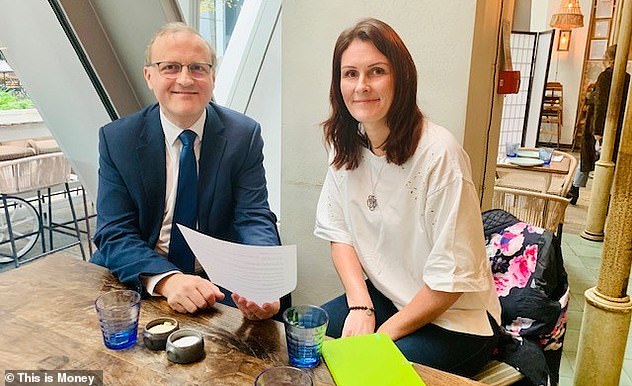 The Government’s independent tax gurus, in the Office of Tax Simplification, issued a report last October saying it was ‘unreasonable’ for parents to lose state pension over child benefit errors they can’t later correct.

READ  We MUST get rescue loans to our small firms, says Andrew Bailey

They said people ‘can easily disadvantage themselves’ under a system that ‘appears illogical’ and ‘is inherently confusing’, and told the Government to find a way to restore state pension credits to parents who have lost them.

What does HMRC say?

‘To ensure no one misses out on their full state pension entitlement, HMRC has always urged families to claim child benefit, even households liable to the High Income Child Benefit Charge.

The child benefit claim form – which is included in bounty packs given to families after the birth of a child – stresses the importance of this information.

‘We are committed to ensuring that backdating is available to protect vulnerable claimants who may be delayed in claiming through no fault of their own.

‘Where no one has claimed child benefit, the law allows claims to be backdated for a maximum of three months.

‘Backdating further than this would make it harder to verify evidence and establish entitlement, since entitlement to child benefit relies upon being responsible for a child each week.’

Why we are campaigning for parents hit by child benefit rules

The Government is unfairly condemning many mums and dads to a poorer retirement.

An innocent paperwork lapse just after having a child shouldn’t bring a penalty of losing tens of thousands of pounds in old age.

We called for the following at the launch of the campaign:

– Full backdating of state pension credits for those who claim child benefit late;

– A review of how credits are awarded, including the feasibility of signing up when registering a birth not via child benefit;

– An overhaul of credit swaps between couples following mistakes on child benefit forms – HMRC has since changed the system for parents trying correct these errors.

Physical to Digital: Future Disruption In the Fashion Industry

Have We Learned Anything from the Woodford Saga?