Chinese citizens are finding ways on social media to lash out at the government and President Xi Jinping over the deadly coronavirus outbreak spreading across the globe.

The virus, known as 2019-nCoV, was first discovered in the city of Wuhan, home to 11 million people and capital of the Hubei province.

So far, figures show nearly 3,000 people have been afflicted worldwide and 82 people – all in China – have died.

China’s government has tight control on the country’s media and Internet and often censors any form of criticism.

But citizens have found clever ways to dodge those censors by comparing the coronavirus outbreak to the Chernobyl explosion or by replacing Xi’s name in tweets with ‘Trump.’ 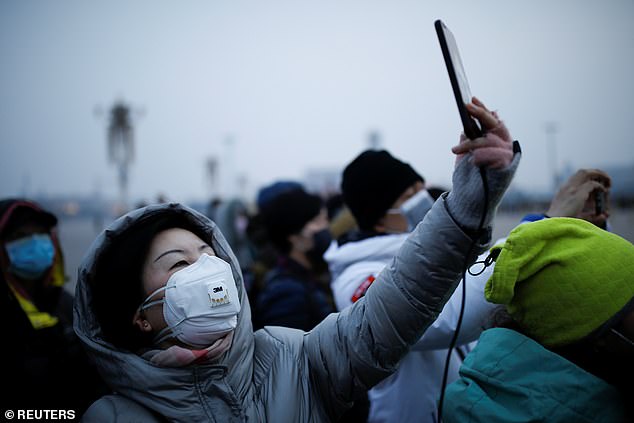 Chinese social media users have been attempting to skirt censors as they critique President Xi over his response to the coronavirus outbreak by referring to him as ‘Trump’. Pictured: A woman wearing a face mask uses her cellphone at the Tiananmen Square in Beijing on Monday

When the outbreak first began in December 2019, authorities led the public to believe it was ‘under control’ and ‘mild’ as they had done with the SARS outbreak in 2002.

Within a few weeks, officials soon revealed the fast-spreading nature of the virus, and that it was far from mild – in fact, it was deadly.

However, the government has not stopped trying to control the narrative surrounding the crisis.

In addition, several official social media posts with updates about the outbreak have been quickly deleted.

This has forced Chinese citizens to come up with creative ways to express their dissatisfaction.

Xiao Qiang, a research scientist at the University of California, Berkeley and founder of China Digital Times, a bilingual news website that covers China, told The New York Times that Chinese citizens are irritated by the government’s lack of transparency.

‘Chinese social media are full of anger, not because there was no censorship on this topic, but despite strong censorship,’ he said.

‘It is still possible that the censorship will suddenly increase again, as part of an effort to control the narrative.’

As the number of those diagnosed rose, President Xi made few to no public remarks or appearances to address the crisis.

Users took to China’s Twitter-like platform Weibo and, because Xi’s name can trigger sensors, many simply asked: ‘Where’s that person?’

But even such veiled comments disappeared, so users began replacing Xi’s name with that of US President Donald Trump.

In one example, reported by The Times, a user writes:, ‘I don’t want to go through another minute of this year, my heart is filled with pain, I hope Trump dies.’

In another, people began comparing the outbreak to the Chernobyl disaster, a nuclear accident that took place in 1986 in Ukraine that also saw a cover-up by the then-Soviet government.

‘In any era, any country, it’s the same. Cover everything up,’ a social media user wrote in a ‘review’ for Chernobyl, the HBO series about the disaster.

The Wuhan coronavirus was recently confirmed to have emerged from illegally traded wildlife at a seafood market, with experts suggesting the virus was passed to humans from snakes or wolf cubs.

Aside from China and the US, cases have been confirmed in Australia, Cambodia, Canada, France, Hong Kong, Japan, Macau, Malaysia, Nepal, Singapore, South Korea, Sri Lanka, Taiwan, Thailand and Vietnam.

Cases are also suspected in Mexico, Colombia, the Philippines and the UK.

On Sunday, Chinese Health Minister Ma Xiaowei said the virus’s ability to spread is getting stronger and that it can be transmitted before people exhibit any symptoms.

There is no cure for the new virus or vaccine to prevent it, and the National Institutes of Health says research to develop a vaccine is in ‘very preliminary stages.’

If I can be protected against HIV, others should be too | Will Nutland

Bowel cancer symptoms: What shape are your stools? Sign of the deadly disease

High blood pressure symptoms: The sign in your hair which could signal your risk

How to improve gut health: Five recipes to help you achieve a happy tummy

Hair loss treatment: The one way to prevent thinning hair according to expert

Guys who gorge on dough balls, burgers and chips more likely to have small testicles and a low sperm count, study says

Logitech Is Making an $89 Million Bet on Game Streaming – Nasdaq

Demystifying influencer marketing: How brands can build relationships with a data-driven culture – Marketing...