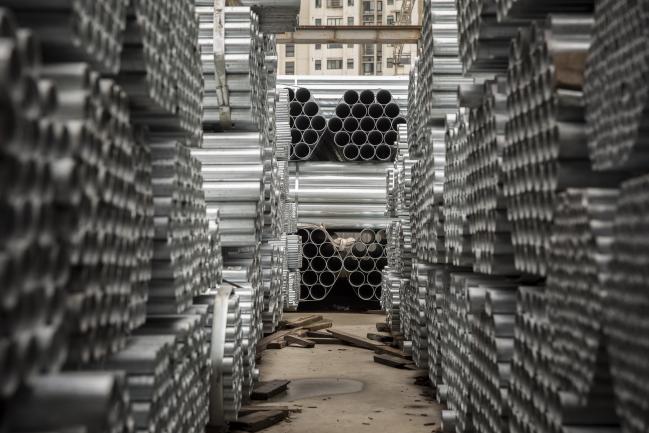 © Bloomberg. Bundles of steel pipe sit stacked at a stockyard on the outskirts of Shanghai, China, on Thursday, July 5, 2018. U.S. President Donald Trump’s attempts to re-balance global trade have already sent the metals world into a tizzy. As countries respond to U.S. tariffs and sanctions, the disarray is set to increase. Photgrapher: Qilai Shen/Bloomberg Photographer: Qilai Shen/Bloomberg

(Bloomberg) — China’s steel industry notched another production record in the first quarter, spurred by consumption in the infrastructure sector as government stimulus props up demand.

The maker of half the world’s steel churned out 231 million tons between January and March, up almost 10 percent from a year earlier and the highest for any first quarter on record. Production in March climbed 10 percent to 80.3 million tons, according to data from the statistics bureau.

Output is rebounding with steel prices as China’s economy holds up, with pro-growth policies helping arrest a slowdown that had weighed on materials demand since the middle of 2018. Spot prices for climbed this week to their highest since November, boosting producer margins and spurring higher output.

“It’s a extremely strong steel output number,” Tomas Gutierrez, an analyst at consultancy Kallanish Commodities Ltd., said by phone from Shanghai. “There is the expectation that local governments will have more money to spend on new projects, and that seems to be speeding up demand. There is a growing reliance on state spending to support growth.”

China’s economy grew at 6.4 percent in the first quarter, beating estimates and fueling the debate over whether the economy needs further stimulus measures. The demand environment for metals is improving, Citigroup Inc (NYSE:). said earlier this week, with gauges such as new credit and manufacturing activity signaling a “bullish turn” in Chinese growth sentiment and activity.

READ  Time to upgrade your home to Smart Home

There are caveats on the steel numbers. Kallanish notes that steel purchasing is peaking earlier than normal, and is probably lower than last year, due to an earlier Spring Festival. The country’s steel use will expand 1 percent over 2019, compared with an earlier estimate of flat growth, before declining next year, the World Steel Association said in its twice-yearly outlook on Tuesday.

The iron ore market was already tightening before Vale’s disaster as seaborne supply contracts and steel output continues to expand, Siddarth Aggarwal, Anglo American (LON:) Plc’s research manager for steel and iron ore, said in an April 13 presentation in Shanghai. He said the trend for higher output would continue this year. China’s steel production will rise 1.8 percent this year to a record, with rising prices extending into the third quarter on better demand, according to Shanghai Steelhome Information Technology.

To contact Bloomberg News staff for this story: Martin Ritchie in Shanghai at mritchie14@bloomberg.net

To contact the editors responsible for this story: Phoebe Sedgman at psedgman2@bloomberg.net, Jake Lloyd-Smith

Disclaimer: Fusion Media would like to remind you that the data contained in this website is not necessarily real-time nor accurate. All CFDs (stocks, indexes, futures) and Forex prices are not provided by exchanges but rather by market makers, and so prices may not be accurate and may differ from the actual market price, meaning prices are indicative and not appropriate for trading purposes. Therefore Fusion Media doesn`t bear any responsibility for any trading losses you might incur as a result of using this data.
READ  Gold Inches Down as Traders Turn to U.S. Dollar

Lowe's says redesigned website will help it catch up, fend off rivals such as Home Depot

A game-worn Kobe Bryant jersey is being auctioned off, starting at $20,000

Walmart in talks to sell majority stake in Asda

The luxury sector is growing faster than many others and Gucci is in the...