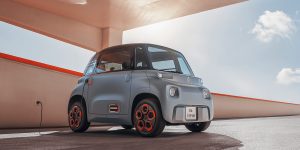 Citroën has just presented an electric two-seater called the Ami based on the Ami One Concept presented in 2019. With this light city vehicle that can be driven without a driving licence, the French company wants to make electric mobility available to everyone. electrive attended the premiere in Paris.

On the other hand, the Ami shows its strengths in terms of manoeuvrability and its small footprint. With a turning circle of 7.20 metres and a maximum of half the parking space, the French traditional brand is promoting the Ami as a mobility concept developed especially for the city. With a competitive price of 6,000 euros (in France), it should really be affordable for everyone.

“Individual, clean, urban – and bold” is how CEO Vincent Cobée and his co-presenters described the Ami at the unveiling in Paris. In their presentation, they link the development of the car with, among other things, the yellow vest protests in France (which were initially sparked by fuel prices) and the Fridays for Future movement. The message: Here comes the answer to current social questions. “The Ami should be a real breakthrough in access to urban mobility,” Cobée continues. “A solution that is as close as possible to new user habits. This outstanding idea was only a concept a year ago. We’re very proud that we’re turning it into reality today.”

Citroën breaks with many well-known standards in design

With a length of 2.41 m, a width of 1.39 m and a height of 1.52 m, the Ami is even more compact than the Ami One Concept presented at the Geneva Motor Show 2019. Two people can sit next to each other in the vehicle, with the passenger seat offset a few centimetres to the rear to create space in the footwell for hand luggage storage. The light four-wheeled vehicle is equipped with a 6 kW electric motor and an automatic transmission. The flat 5.5 kWh battery is also installed under the seats, which can be fully charged within three hours via a 230V household socket. Charging at public stations or wall boxes is also possible, says the company but not any faster. With battery, the Ami weighs 485 kilograms.

As far as the design is concerned, the Ami breaks with many well-known standards. This starts with the small, specially designed 14-inch wheels and ends with the fact that the bonnet, rear and panoramic roof cannot be opened. Access is via the two wide side doors, with the identical doors opening in the opposite direction: in the opposite direction on the driver’s side for easier access, and in the classic way on the passenger side.

The individual smartphone serves as a networking tool

Inside, the two passengers have a panoramic view: The windows above the shoulder line make up 50 per cent of the total surface area. And as an allusion to the brand’s history, the side windows are folded up manually, as on the 2CV – known here in France as the duck. The occupants cannot transport much a whole lot of luggage. There is some storage space in the footwell and in the rear shelf behind the seats, which is only accessible from the inside. Only the most necessary displays are located in the cockpit, the user’s own smartphone serves as a networking tool. The design is radically based on the credo “form follows function”, as the audience was told at the presentation.

Since the Ami is to compete with two and three-wheelers, Citroën underlines that in this form of light electric vehicle, passengers sit in a “closed, heated, bright and completely protected interior” – this comment is probably also referring to the distinction between the well-known Renault Twizy. In contrast, the small electric car does not have air conditioning, which is probably a minus point, especially in southern European markets. The vehicle will only be available in a blue-grey colour, whereby the colour accents can be customised on the rims and mudguards, among other things. There is also an optional accessory kit with decorative and functional elements. As the two ends of the personalisation continuum, Citroën introduces the packages “My Ami Pop” (young, sporty design with rear spoiler) and “My Ami Vibe” (sophisticated, graphic design with roof strip).

With the Ami, Citroën is including a completely new target group in its sales strategy – namely teenagers. In France and Italy, the car is allowed to be driven from the age of 14, in most other countries from 16 years of age. The only requirement is an AM driving licence.

In Germany, the order books will be opened in the second half of the year

As for the schedule, in France, orders for the Ami can be placed from 30 March. The market launch is scheduled for the end of May, beginning of June. From that time on, the vehicle will also be used in the fleet of the PSA car-sharing company Free2Move. In Germany, the order books will be opened in the second half of the year, as well as in other countries such as Spain, Italy, Belgium and Portugal. The city runabout is expected to be on sale in Germany at the beginning of 2021.

In terms of price, the French company is clearly pushing the limits its pain threshold: on their home market, the Ami will be available at a gross sales price from 6,000 euros or from a monthly leasing rate of 19.99 euros (four-year term, 10,000 kilometres per year). As a car-sharing car, it will be available for rent from 0.26 euros per minute in the Free2Move fleet. “The leasing rate is on a par with a mobile phone contract and the car-sharing price is the same as for a rented e-scooter in Paris,” the assembled group of journalists was told. Meanwhile, the details of the pricing model for Germany have not yet been made public.

The fact is that the PSA subsidiary can offer the Ami at this low price because the vehicle consists of relatively few parts. This is due to the symmetry of the electric motor, which means that parts that are often installed at the front (such as the bumpers) can also be found at the rear. The result is lower production costs. The Ami One Concept, which – as Citroën points out – was developed into a production vehicle in just one year, already transported this idea.

Fnac Darty: Ami will be available at stationary retail outlets

In order to “push the established car industry even further forward”, as it was said in Paris, the brand also wants to break new ground in sales. For example, the Ami will be available online and delivered to the customer’s home on request. He will be brought by an expert who will spend half an hour going over the most important functions with the new owners, the car manufacturer said.

In addition, thanks to a cooperation with the retail group, Fnac Darty, the electric car will also be available in their stores. This means that in Fnac and Darty stores, nine square meter pop-up stores will be integrated with the vehicle on site. You go where the people are, Citroën says, in explanation of this strategy. Fnac is a book and electronics retailer, Darty specializes in electrical appliances. Both have a dense branch network. In France, most of the chains’ e-scooters are sold over the counter, Citroën adds as background information. In order to offer test drives, pop-up locations are also to be set up in car parks near such branches. Ami will also be sold through the regular dealer network, but only at a few, selected partners, it is said. The company has not yet revealed how the light electric vehicle’s distribution in Germany will be handled.

On the path to net zero: transport – Energy Saving Trust