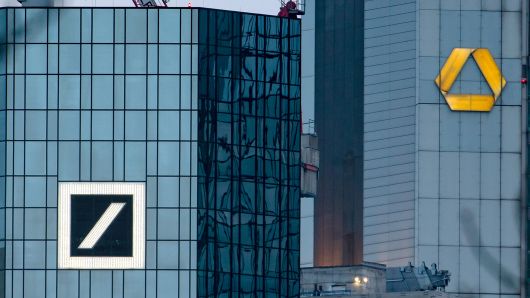 Commerzbank‘s executive board is due to decide on April 9 whether to intensify merger talks with Deutsche Bank or back away from a deal, German business weekly Wirtschaftswoche said on Wednesday.

The magazine said Commerzbank’s management is scheduled to discuss how to proceed in the merger talks during its next regular session, Wirtschaftswoche added, citing company sources and an internal memo.

Upon initiating formal talks with Deutsche Bank on March 17, Commerzbank chief executive officer Martin Zielke told bankers that management aimed for a decision on whether to go forward with a merger in the next two to three weeks, two sources with knowledge of the matter said at the time.

In a memo to employees days later, Zielke wrote: “I can promise you that we will strive to keep this period of uncertainty as short as possible and we will work hard to ensure that a decision is reached soon.”

Deutsche Bank supervisory board chairman Paul Achleitner said that the banks aim to announce more concrete steps on the merger by late April.

Diageo warns coronavirus could dent profits by more than £200 million

If this government truly wants to ‘level up’ England, devolution is key | Luke Raikes

Lent is back, and so is fish on these fast food menus

Boeing 737 MAX jets could be grounded for weeks as black box probe to...