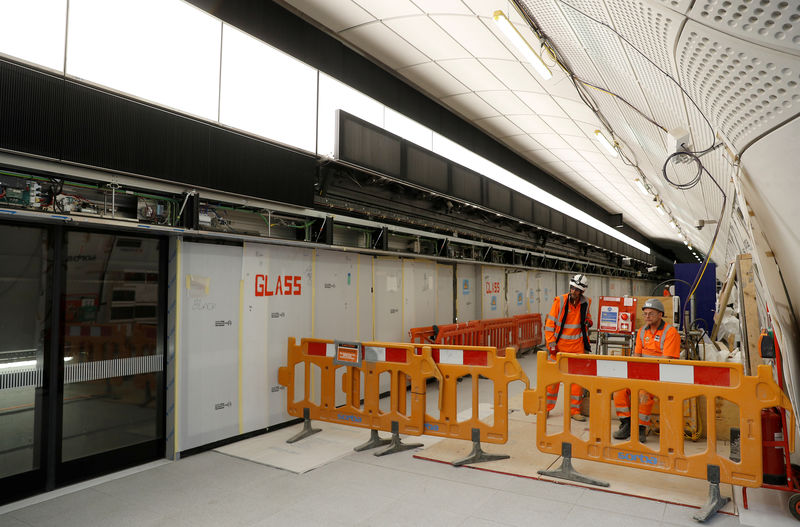 © Reuters. FILE PHOTO: Crossrail workers are seen in the new Farringdon underground station of the Elizabeth line which had been expected to open in December 2018, in London

LONDON (Reuters) – London’s new flagship railway Crossrail cannot say when the much-delayed line will open, or what the final cost will be, Britain’s spending watchdog said on Friday after Europe’s most ambitious infrastructure programme hit the buffers.

Due to open in December 2018, the rail line running between Heathrow Airport to the Canary Wharf financial district via central London, is now unlikely to open before 2021 after it was hit by testing and signalling problems.

The National Audit Office (NAO) said on Friday the mismanagement of Britain’s most important infrastructure project in decades had resulted in unnecessary spending and delivered poor value for taxpayers.

“Throughout delivery, and even as pressures mounted, Crossrail Ltd clung to the unrealistic view that it could complete the programme to the original timetable, which has had damaging consequences,” Amyas Morse, head of the NAO, said in a statement.

“While we cannot make an overall assessment of value for money until Crossrail is complete, there have been a number of choices made in the course of this project that have clearly damaged public value.”

The NAO said Crossrail has not yet completed its assessment of the impact of the opening schedule on costs, and it remains unclear when the service will start.

When open, the Elizabeth line, as the link has been named, will connect destinations such as Heathrow west of the city with the rail hub of Paddington, shopping districts such as Bond Street, Canary Wharf in the east, and beyond.

It is expected to carry about 500,000 passengers a day and alleviate pressure on the Victorian-era metro (subway) network, the Underground or Tube. An initial budget of around 15 billion pounds ($19 billion) has risen to 17.6 billion pounds.

The NAO said that despite the unexpected costs of the project, the amount of money already spent on the project meant it was “past the point of no return” and that the new bosses of the project should be allowed to get it built “without unrealistic cost or time expectations.”

A spokeswoman for the Department for Transport said the government was “deeply disappointed” by the delay and cost overruns.

“The focus must now be on ensuring the Elizabeth line opens as soon as is safely possible,” she said in a statement.

The opposition Labour party said it was the “the latest withering assessment of the Department for Transport’s management of a major infrastructure project.”

READ  10 things you should never buy at the dollar store

The Fed Can’t Save Us From Coronavirus

Democrats Love a Wealth Tax, But Europeans Are Ditching the Idea

Beach towns you can actually afford to call home

Facebook white paper calls for ‘new type of regulator’ for the good of its...