The weekend was good for Cryptocurrencies, Bitcoin(-1.35%) surged over the $10K mark on good volume, and the rest of the currencies followed, with the major digital coins and tokens gaining over 2 percent. But a selling spike on Monday early morning has pushed Bitcoin and most altcoins back to the levels left on Friday, in what might be a test of their bullishness. Ethereum loses 2.33 percent from its value 24 hours earlier, Ripple sheds 3.71 percent, Bitcoin Cash also drops -3.68 percent, and Bitcoin SV recedes 4.26 percent. There are exceptions, though. Binancecoin(+4.99%) Tezos (14%) and Lisk (34%) look quite bullish. Etherum tokens are also mostly retreating, although HT(+6.58%) ZB(+7.64%), MOF(+14%), and AION(+21.2%) move quite strongly. 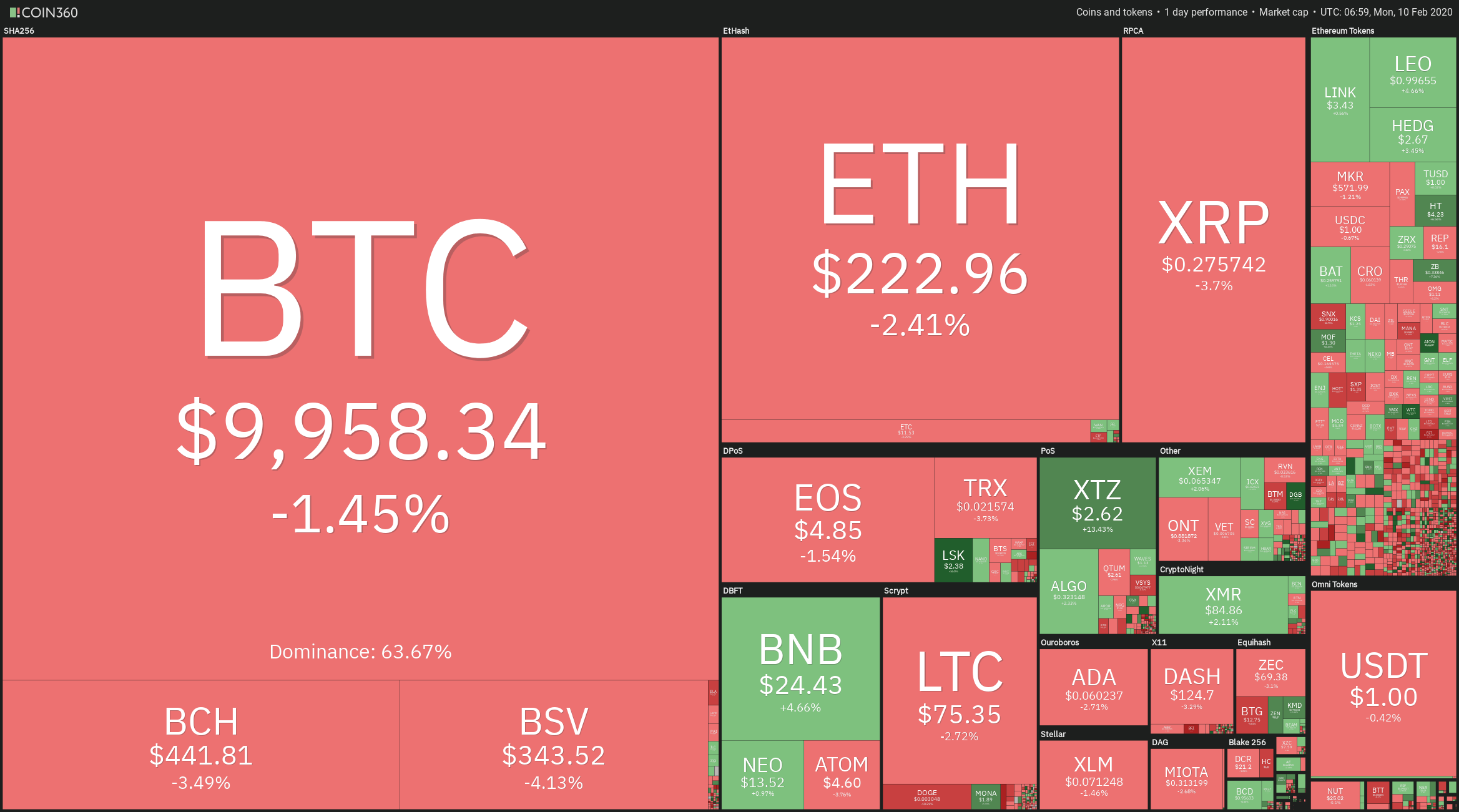 The market cap of the crypto sector is currently $284.814 billion, about 1 percent higher than 24 hours ago, but well off its peak of $291 billion. The traded volume was $49.83 billion in the last 24 hours, 6.98 percent above the volume of the previous 24H cycle. Finally, Bitcoin Dominance is currently 63.67 percent, slightly below last Friday’s value. 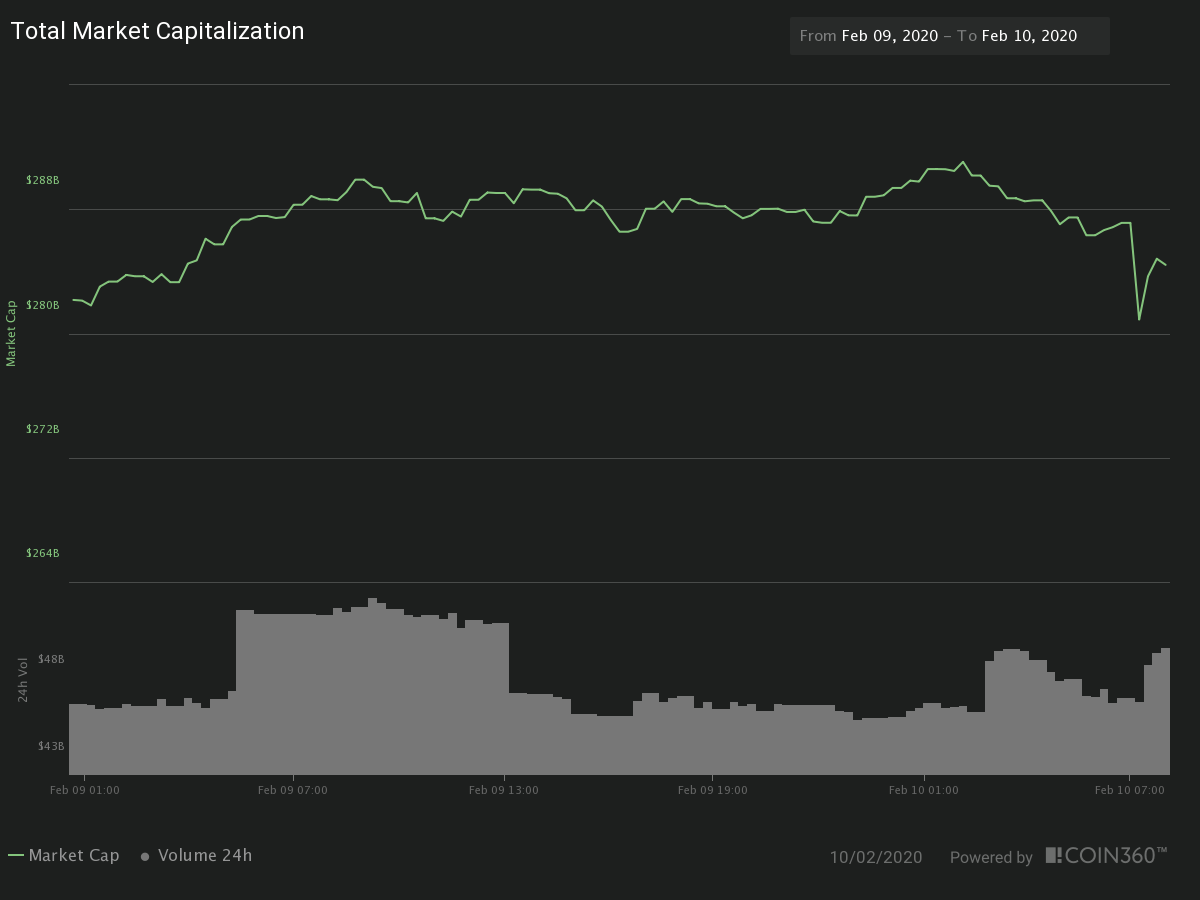 Chinese Insurance companies use Blockchain to manage coronavirus-related claims, according to a news piece by cointelegraph.com. “Xiang Hu Bao has been able to process claims and make payouts to participants quicker, due to the decentralized, trust-free nature of blockchain technology.” 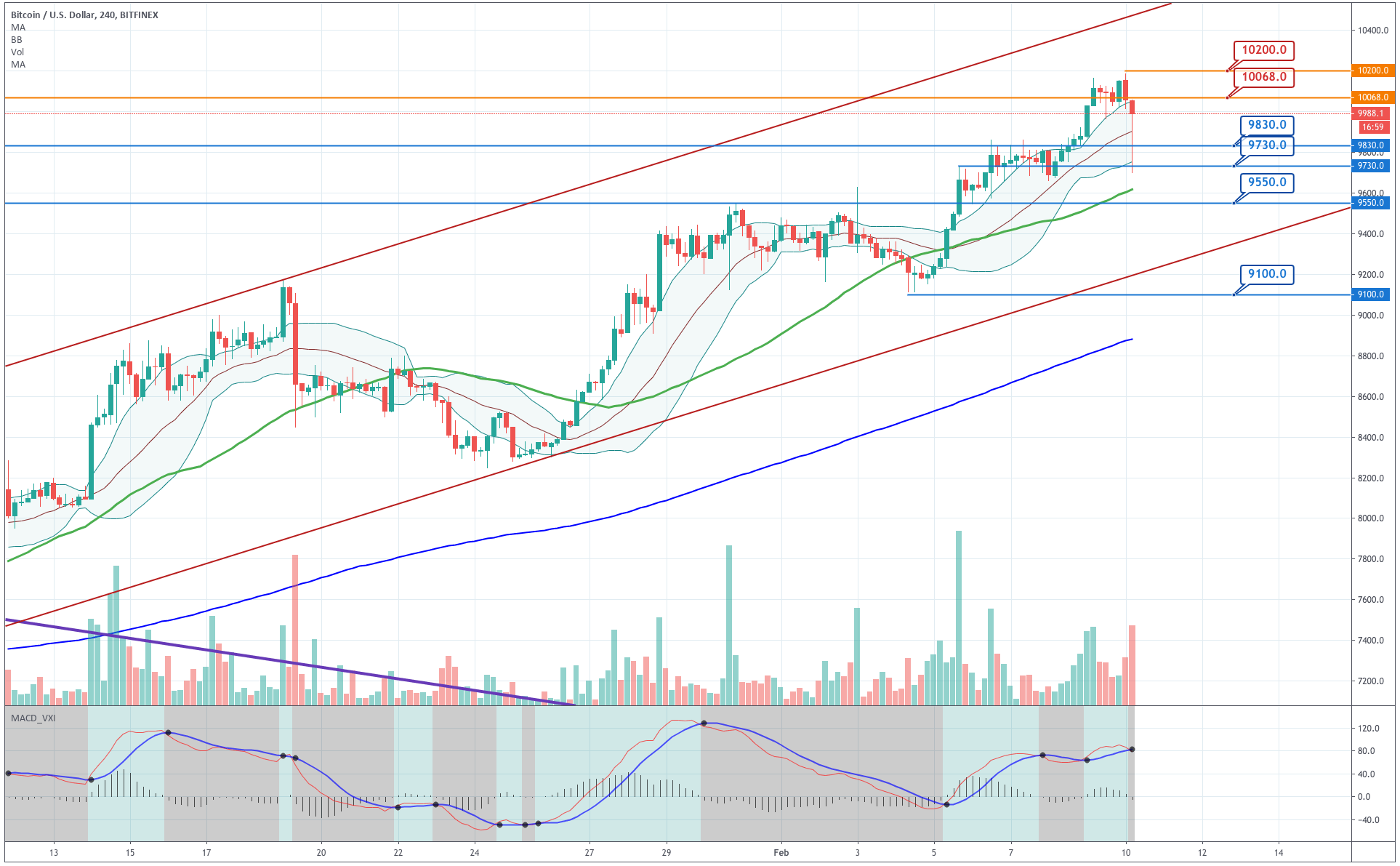 The latest candle shows a flash drop to the floor of the last leg up ($9,700), which characterizes the beginning of a retracement. The price is now below the 10K mark again, and the MACD has made a crossover to the bearish side. That probably means Bitcoin will stay stuck in a correction for some time, as it happened in the recent past. The levels to watch are $9,730 to the downside and $10,200 to the upside.

Technically, the price is still close to the +1SD line and above its 50 and 100-period SMA; thus, it is still in an upward trend. The MACD just tells now it has entered into a consolidation phase. 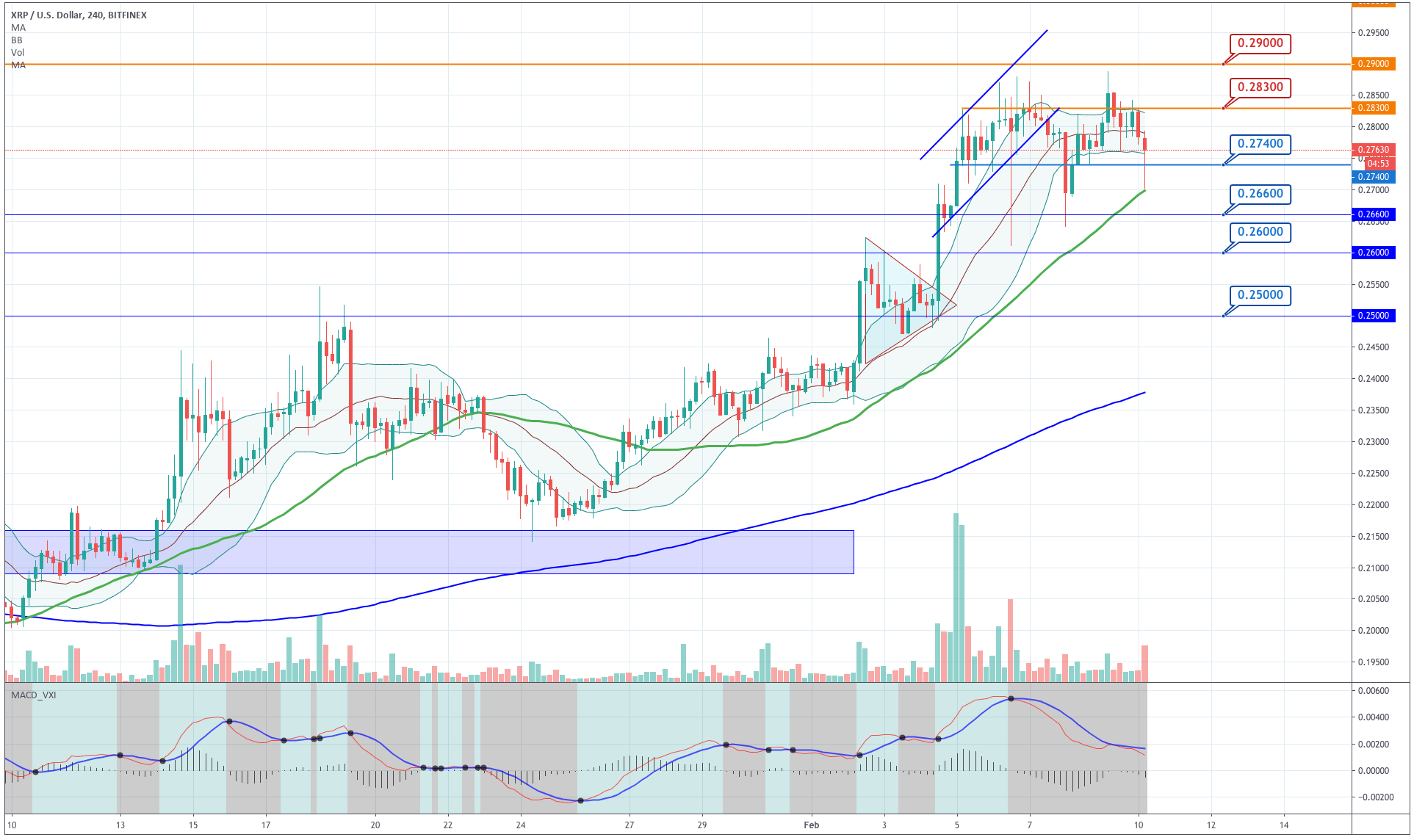 Ripple has been moving in a consolidation structure after leaving the upward tight channel (Blue) in which it was moving up; most of the time, its price between $0.274 and $0.283.  Technically the MACD is showing that this corrective phase is still active, and the recent price accion, with lower highs, makes us suspect more corrective action. That said, the price is still above its 50-period SMA, which has acted as support. So, the uptrend is still in place. The levels to keep are $0.274 to the downside and $283 to the upside. 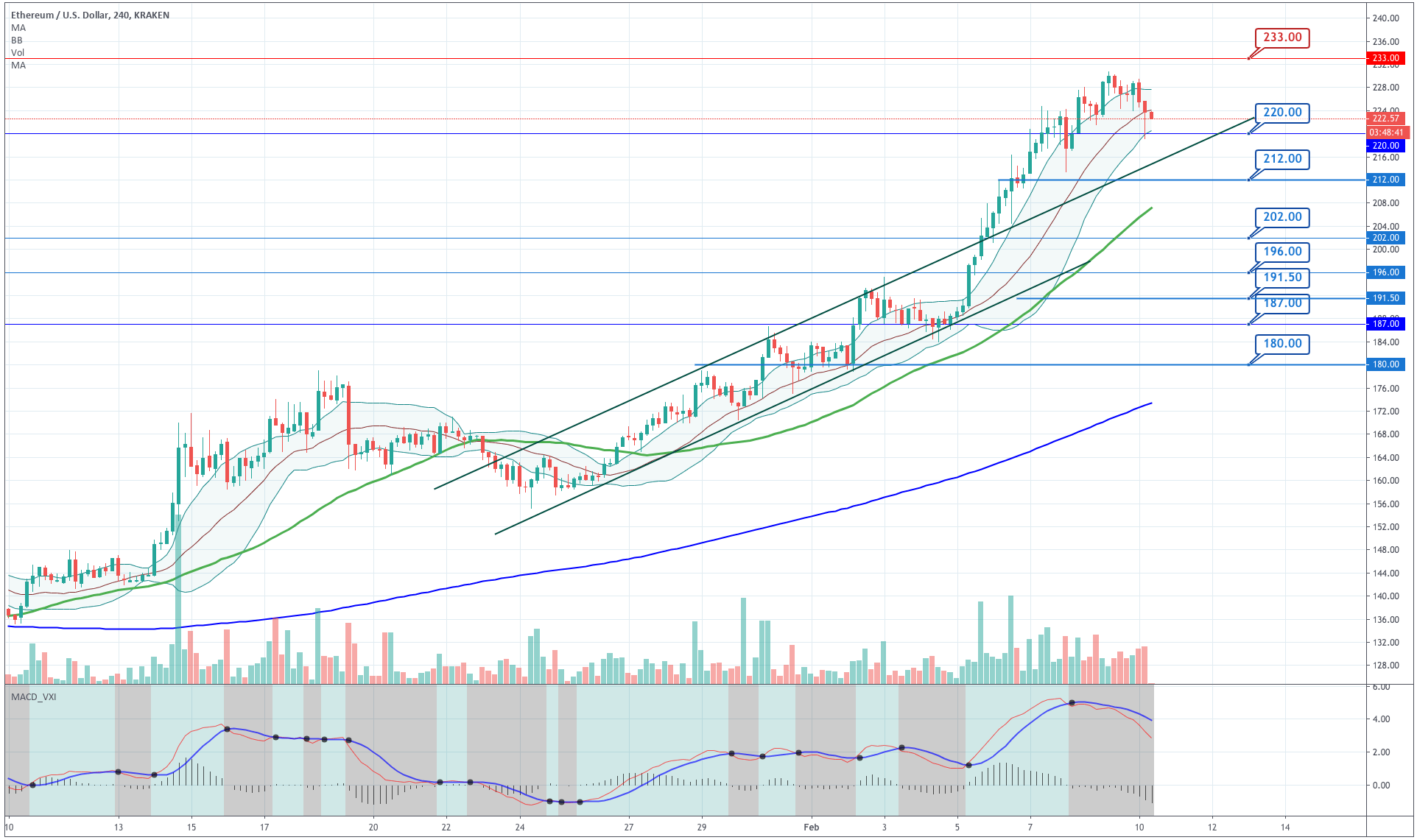 Ethereum has been moving quite strongly recently, its price moving from $187 to 230 in five days. There is no surprise it is now taking a pause. A healthy consolidation is good for the overall upward trend.  Technically, the MACD is in a bearish phase, and the price has made a lower high in its 4h Chart.  We think the price could move in a range between $220 (or, even, down to $212) and $230 for some time, but the upward trend is healthy. 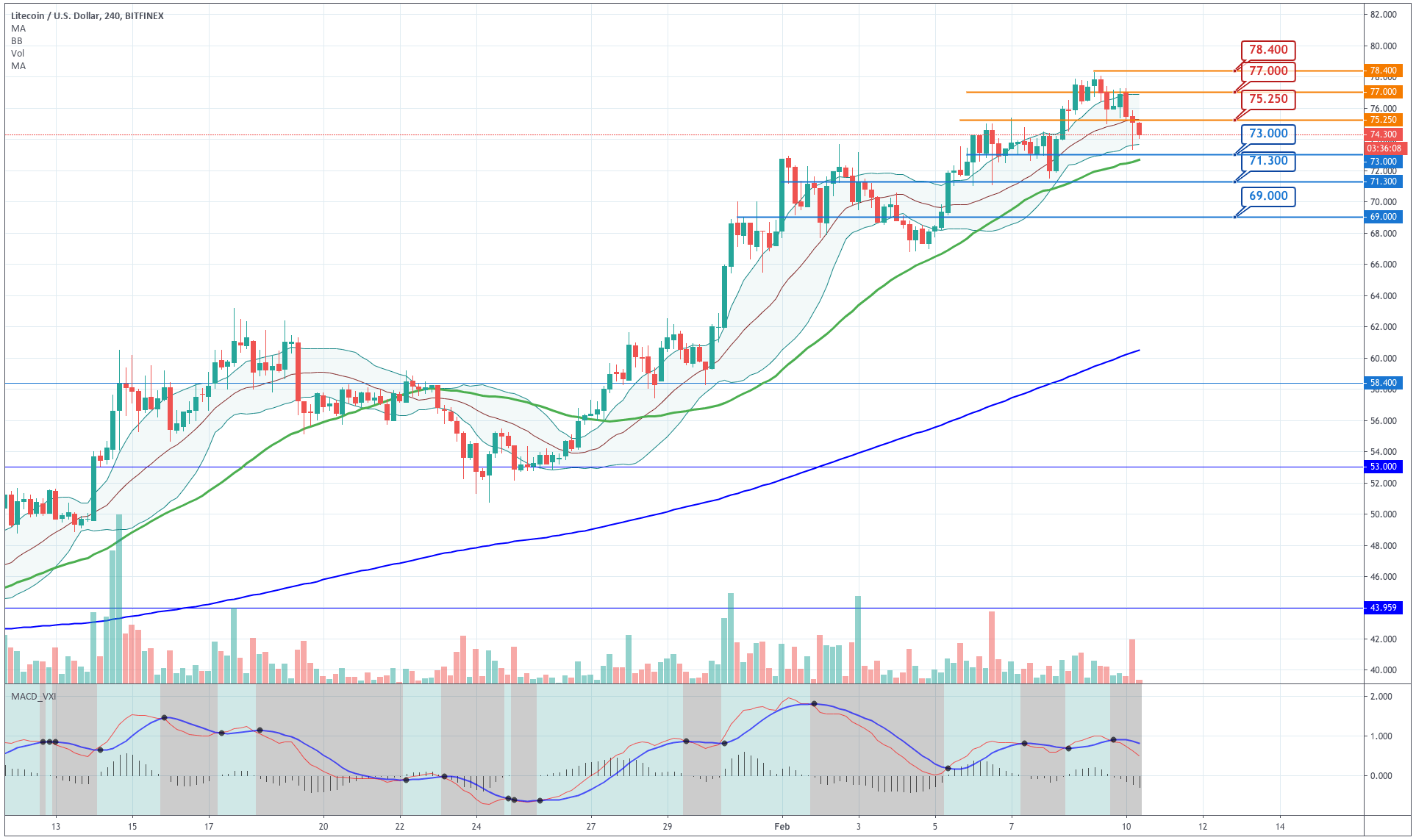 Litecoin has been moving up following its 50-period SMA closely. The recent action has made its price retrace from its $78 top and now is back to a region between $73 and $77. Technically the MACD warns of a pullback, but we also see its price following its 50-period SMA, as already stated. Thus, we think the price will hold at $73, and that the upward trend is not endangered.