Exchanges are still getting hacked

Lots of great things happened in the cryptocurrency industry in 2019, so let’s get the negative events out of the way first.

Just two weeks into 2019, the first cryptocurrency exchange hack of the year took place when New Zealand based Cryptopia was hacked for over $16 million. 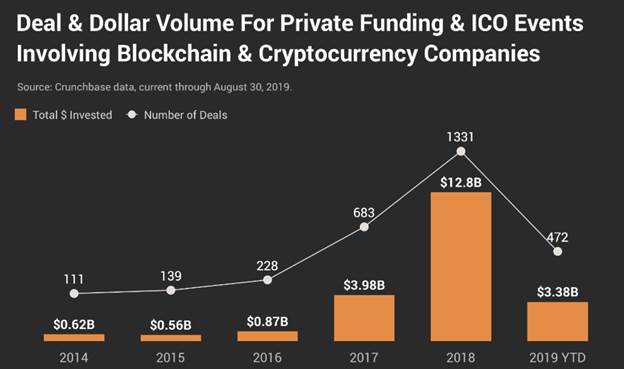 The lack of cryptocurrency-focused funds launching and the significant reduction in the amount of money invested in ICO’s and private funding rounds could indicate institutional investor sentiment. The cryptocurrency markets have been in a multi-year bear market, and the fact that fewer funds and companies are looking to launch and invest may indicate what this group believes about the future of the cryptocurrency markets.

Now with the bad news out of the way, let’s take a look at some of the positive developments within the blockchain and cryptocurrency space this year.

Bakkt Bitcoin Monthly Futures work like any other futures market, however, they pay out their investors in Bitcoin instead of fiat. Many thought that Bakkt would be the onramp for institutional investors to enter the digital currency markets, however, the Bakkt Bitcoin futures product continues to see an almost irrelevant amount of daily trading volume. This might indicate that institutional interest in the digital currency markets is not as high as we like to believe it is in the crypto-community, and that the influx of institutional money into the cryptocurrency markets is still far off.

In 2019, BSV surpassed both BTC and BCH when it came to daily transactions as well as average daily transactions per block. According to data from Coin.Dance, Bitcoin SV continuously surpassed BCH and BTC in both of these metrics in September and November, respectively. This trend is accelerating too.

More memories to be made

The events that we have reviewed in this article include just a few of the many events that took place in 2019–but it is not all-encompassing. Nevertheless, quite a few significant events happened both on and off-chain in the blockchain and cryptocurrency industries this year. As both of these industries continue to mature, we are likely to see even more remarkable events take place in the coming years.

In 2020, we have a lot to look forward to. In February, BSV will undergo the Genesis protocol upgrade that removes the block size limit in the BSV network. This upgrade will make BSV the most scalable cryptocurrency in the market. In addition, the Bitcoin halving is expected to take place in April 2020—an event that many individuals in the cryptocurrency community look forward to across all networks.

Be on the lookout for significant developments in the blockchain and cryptocurrency news in 2020. And if you think we’ve forgotten any noteworthy events that took place in 2019, let us know in the comments below!

Samsung for blockchain and cryptocurrency in 2020 – Cryptopolitan