‘Daily’ cocaine use changes genes in the brain and fuels addiction, study finds

Chronic cocaine use could alter genes in your brain and contribute to addiction, a new study finds.

Research conducted in mice found that genes in the hippocampus, the part of the brain responsible for memories and learning, were more active when cocaine was used daily.

Scientists think that when these genes are ‘on’ and active, a drug user’s brain creates stronger links between the drug and the environment in which they take it, which creates positive memories and makes them more likely to use again.

The team, from Michigan State University, says the findings could lead to the development of therapies that target genes in combination with traditional addiction treatments. 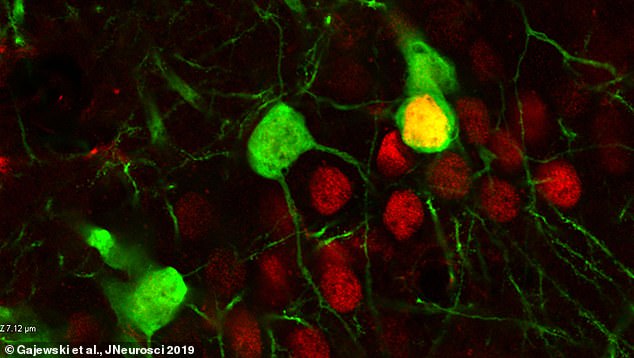 A new study found that daily cocaine use can make genes more active in the part of the brain associated with memories and contribute to addiction. Pictured: Neurons in the hippocampus (green) expressing the FosB gene (red) after cocaine use

Opioids may be driving the American overdose epidemic, but cocaine use and deaths have also been on the rise.

Several studies have shown that the FosB gene – and similar genes related to it – encodes proteins that quickly ramp up in specific brain regions after someone uses an addictive drug like cocaine.

These brain regions are associated with memories and behavioral responses to the drugs, such as the feeling of rewards after taking it.

But it wasn’t entirely clear why or how cocaine triggered this protein influx, so the Michigan State steam set out to unravel the mystery.

If they could work out what button cocaine pushed in these brain regions, so to speak, then perhaps they could develop treatments to block the drug’s effects.

For the new study, published in the journal JNeurosci, researchers gave half of a group of mice cocaine and the other half a saline solution.

They then looked at activity levels of the FosB gene in the hippocampus in both groups.

Mice that were given cocaine daily showed an increased expression of the FosB gene compared to the control group.

Gene expression is the process by which the information – or the DNA – contained within a gene becomes a product.

This means that the gene is turned ‘on,’ activating the biological machinery that makes the protein that in turn allows positive drug-related memories to form.

But when researchers blocked changes made to the gene, the mice couldn’t form the association between cocaine and the environment where they received the drug.

‘These results offer new insights in the molecular changes that take place in the hippocampus during chronic cocaine use,’ the authors wrote.

It is hard for cocaine users to quit cold-turkey because this can lead to severe withdrawal symptoms such as agitation, anxiety depression and fatigue.

However, the researchers believe that by ‘short-circuiting’ the gene and protein that make the memory of cocaine feel so good, they might be able to help break the pattern of addiction, too.

Coronavirus latest: When will Britons stuck on quarantined cruise ship return to UK?

Lyme disease: A peculiar feeling in the head is a warning sign of the condition

Complete Guide to Finding Finance for a Property Development

Assume doctors are women because 'most medics will soon be female'