The dreaded inverted yield-curve has arrived. It’s a key data point for investors who fear it means trouble ahead for the economy — and a possible end to this historic rally in the stock market.

But if history is any indication, rate-obsessed stock investors might be in better shape than they think, and some on Wall Street say that new macroeconomic realities make the yield-inversion a red herring.

On Wednesday, the yield on the benchmark 10-year Treasury note broke below the 2-year rate. The odd bond market scenario has been an early, yet historically reliable sign of recessions. The so-called inversion shows show jitters about the global economy as investors run to safe havens. The last time this part of the yield curve inverted was in December 2005 — two years ahead of the financial crisis and recession.

Markets sold off sharply after the bond market’s recession warning. Still, some Wall Street analysts are urging investors to consider the bigger picture, and say this yield inversion might be different. Josh Brown, CEO of Ritholtz Wealth Management, highlighted that the last nine times the yield curve inverted, interest rates were above 6% and yields at 2% are “a very different situation.”

Because the yield curve is now widely seen as recession red flag, it’s more closely watched. As a result, is going to act differently, Brown said. Few people were paying attention to yield inversions in the 1980’s and 1990’s, he said.

“Markets are too complex to believe than any indicator can be an open and shut case once that indicator becomes widely discovered and gamed by trillions of dollars worth of trades,” Brown said.

He pointed to Japan, where the yield curve has become a much less reliable economic indicator and rates have been low or near zero for decades. Brown said that’s a sign that the yield curve “may contain less information for forecasters at lower absolute levels,” near where U.S. Treasurys are now.

Former Federal Reserve Chair Janet Yellen also warned that investors might want to think twice about trusting the yield curve inversion as the a recession indicator. Yellen acknowledged that it has been a “pretty good signal of recession” in the past, and “that’s when markets pay attention to it.”

“But I would really urge that on this occasion it may be a less good signal,” Yellen said on Fox Business Network Wednesday.

When asked if the United States is headed into a recession, Yellen said “I think the answer is most likely no” and that the U.S. economy has enough strength to avoid that. She did say the odds “have clearly risen and their higher than I’m frankly comfortable with,” Yellen said.

Lower bond yields abroad are also seen as weighing on yields in the U.S. Roughly $15 trillion worth of government bonds worldwide, or 25% of the market, trade at negative yields, according to Deutsche Bank. That number has tripled since October 2018.

Low inflation in the U.S. that could be contributing to lower rates. Consumer prices rose more quickly than expected in July, helped by a jump in gasoline and the rising cost for rent. The consumer price index for all items was up 0.3% for the month, above expectations for a 0.2% increase. On an annualized basis, the core inflation rate increased 2.2%, while the headline number was up 1.8%.

If there was inflation risk, Lavorgna said the 10-year Treasury yield would be significantly higher, perhaps at least 2 percent.

“Now is not the time to panic, but the yield curve is telling you that growth is weakening,” Lavorgna said.

Over the past 60 years, new lows for interest rates haven’t always signaled new lows for stocks in the months that follow, according to analysis by Bespoke Investment Group. The firm found that when the 10-year Treasury Note yield hits a 52-week low, as it did this week, average forward returns for the S&P 500 are higher the following day, week, month, three months, six months and year.

“If anything, the historic precedent for equity market returns when rates are at new lows is bullish not bearish,” Bespoke’s George Pearkes says.

U.S. government debt yields fell within 10 basis points of a 52-week low Tuesday as investors continued to pour into safe-haven bets. The trade war between the U.S. and China two largest economies and concerns of slowing global economic growth have also pushed investors into assets like gold.

“Going forward, should we expect stocks to follow the path of interest rates lower? Not necessarily,” Pearkes said. “There’s a wide range of results: everything from strong bull markets to the start of bear markets to cycle lows.” 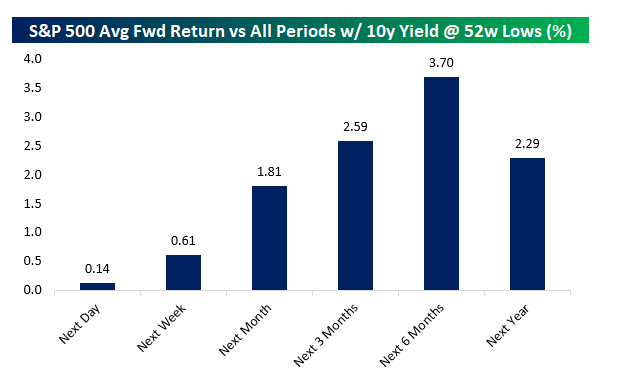 Given the risk-aversion showing up in long-term interest rates, Pearkes said you might expect equity markets “to be on the ropes to a greater degree than is currently the case.” The Dow Jones Industrial Average fell as much as 620 points Wednesday but is still up 10% this year. The S&P 500 is still up 14%.

To be sure, the flattening yield curve is still saying something. Peter Boockvar, chief investment officer of Bleakley Advisory Group, called the latest yield inversion “the last domino” in what has been a years-long progression.

“You can’t ignore the trajectory of this flattening,” he said. “While there are different things that drove the inversion, people are still worried about the global economy.”

Low interest rates have resulted in some upbeat factors in the housing market, like a surge in refinancing, and strong mortgage applications. But Boockvar said there are still signs of a soft housing market and that new home purchases are anemic. Data out of China Wednesday, global PMI and weakness in U.S. manufacturing also back up investors’ worries about the global economy.

“There’s a laundry list of data points that show weakness — the Fed will try to offset that because the first rate cut didn’t do it,” Boockvar said.

Coronavirus will hit the profitability of Asia Pacific banks through 2021, says Fitch

Britons flocked to the parks as lockdown took hold

MPs berate Tories over failure to rein in corporate excess