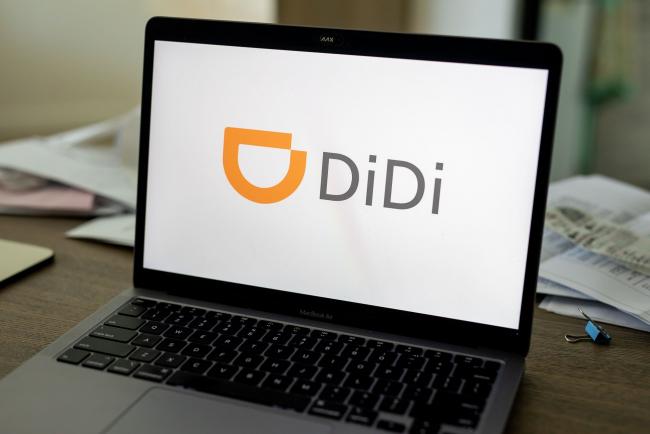 © Bloomberg. The Didi Global Inc. logo on a laptop computer arranged in Hong Kong, China, on Friday, Dec. 3, 2021. Didi has begun preparations to withdraw from U.S. stock exchanges and will start work on a Hong Kong share sale, a stunning reversal as it yields to demands from Chinese regulators that had opposed its American listing. Photographer: Paul Yeung/Bloomberg

(Bloomberg) — Didi Global Inc. is widely expected to secure a blessing from shareholders on Monday to delist in New York, capping an 11-month ordeal that wiped out around $60 billion of its market value and turned the ride-hailing giant into a symbol of China’s tech crackdown.

The internet firm’s biggest backers including SoftBank Group Corp., Tencent (HK:) Holdings (OTC:) Ltd. and Uber Technologies (NYSE:) Inc. are expected to vote in favor of a delisting at an extraordinary general meeting in Beijing, according to market observers. That would clear the way for the company to cooperate with regulators who are demanding an overhaul of its data systems as part of a cybersecurity review. Only then will Didi be free to begin preparing for a Hong Kong share float, the best outcome investors say they can hope for.

The retreat is part of what many see as comeuppance for a company known for pushing the limits with Beijing authorities.

Following years of rapid growth, Didi forged ahead with an initial public offering in June 2021 despite regulatory opposition. Days after the $4.4 billion IPO, the country’s internet overseer forced it off China’s app stores and initiated a sweeping cybersecurity probe into the company, amid concerns of data leaks to a foreign power. The debut was so controversial it triggered an onslaught of regulatory actions constraining Chinese companies from raising capital overseas.

SoftBank and other major backers are likely to back Didi’s delisting from the New York Stock Exchange in hopes that it will appease Beijing, securing chances of a comeback including an eventual listing in Hong Kong. SoftBank officials were not immediately available for comment.

Shen Meng, director of Beijing-based boutique investment bank Chanson & Co., said investors had little choice but to accept the delisting but will closely track Didi’s fate to see whether they could still trust the Chinese market. It is still unclear what actual punishment awaits Didi, which has been in talks with the Cyberspace Administration of China about a fine and other penalties.

“Didi’s proposed delisting, if realized, will certainly deal a serious blow to investors’ confidence on Chinese stocks,” he said. “Having said that, if the delisted companies could be ‘reborn’ in Hong Kong with good valuation and liquidity, market concerns over Chinese investment will likely fade away in no time. After all, investors don’t care whether a company is listed in Hong Kong or the US, as long as they can get a good return on investment.”

Didi’s shareholders, which also include the likes of Fidelity Investments and Blackrock (NYSE:) Inc., have so far avoided commenting on the delisting.

Jitters over Beijing’s crackdown on Didi and other powerful companies such as Alibaba (NYSE:) Group Holding Ltd. triggered a global sell-off in Chinese tech companies last year, with investors questioning Beijing’s intentions for an industry it regards as having amassed too much wealth and power.

Didi was founded in 2012 by Cheng Wei, an Alibaba veteran whose brash tactics are credited for making Didi one of the world’s biggest ride-hailing services, and one of the few which managed to fend off competition from Uber. After a heated price war between the two companies, Didi bought Uber’s China operations in 2016.

The company, valued at around $80 billion at its IPO, will likely see its stock traded over the counter on the so-called pink-sheets market, home to penny stocks and other riskier businesses.

Some investors could be forced to sell because their mandates don’t allow them to hold unlisted shares. Hedge funds have already reduced their Didi holdings by 29% to about $231.9 million during the first quarter, according to a Bloomberg analysis of filings. Even those who are free of such mandates, such as SoftBank, may question whether it’s worth holding onto the shares given uncertainty over Beijing’s punishment, increased competition from smaller rivals and stalled expansion overseas. SoftBank has plowed more than $12 billion into the company and has seen the value of its 20% stake fall from a peak of $16 billion to under $2 billion.

Monday’s vote will be carried out on a 1 vote-per-share basis. Didi’s management, SoftBank, Uber and Tencent altogether hold around 48% of Didi’s equity ownership, according to its annual report. Didi said in a May filing that it requires a simple majority to set the delisting in motion, and that the company may postpone the meeting if shareholders push back.

The ride-hailing giant has explored several alternatives including hiving off data to a third-party Chinese firm and selling a stake to state-backed companies, Bloomberg News has reported.