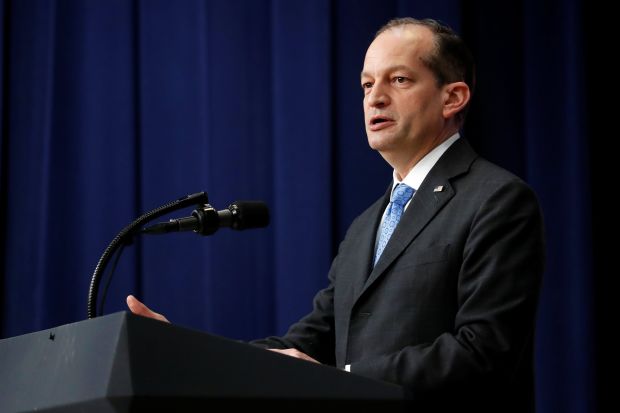 Labor Secretary Alexander Acosta has tried to ease regulation, but unfair enforcement is another story. Witness Labor’s continuing stickup of

over diversity in hiring based on dubious evidence.

Mere days before Barack Obama left office, Labor sued Oracle for discrimination. The lawsuit supposedly stemmed from a routine audit of Oracle’s hiring and pay in 2014. The complaint says Oracle discriminated against “qualified” blacks, Asians and women in “product development roles” by paying them less than whites in similar roles. Labor also alleged that Oracle discriminated against blacks, Hispanics and whites in favor of Asian applicants in two other positions.

That’s right—Oracle allegedly discriminated both against and in favor of Asians.

Labor based its complaint solely on statistical analyses of Oracle’s workforce. For instance, 82% of the employees Oracle hired for a technical position were Asian compared to 75% of job applicants. The department didn’t review worker applications or performance reviews to see if pay and hiring discrepancies could be explained by merit. Labor also assumed employees with the same job title do the same work though that’s often not true.

Especially bizarre was Labor’s complaint that Oracle discriminated by offering “referral bonuses that encouraged its heavily Asian workforce to recruit other Asians.” The idea that people recruit friends is hardly nefarious, yet Labor implies that Oracle’s Asian workers recruit only Asian friends.

Oracle is fighting Labor’s lawsuit but was required in discovery to hand over more than 85 million data sets to the government for more statistical manipulation. Last month Labor amended its lawsuit to add a charge that Oracle is “channelling” blacks and women into lower-level jobs and giving hiring preferences to immigrant visa holders “that it can later underpay.” Note this is substantially different from its original complaint that Oracle compensated similarly situated workers differently.

READ  ET View: The lesson for Rahul and Mamata from Lok Sabha 2019

Labor also claims that Oracle discriminated against women and minorities by using their prior jobs and salaries to set starting pay. The Supreme Court is being asked to hear a case claiming that the Equal Pay Act prohibits considering a worker’s prior pay, but most appellate circuits have said it does not.

There’s no evidence in the complaint that Oracle intentionally steered women and minorities into lower-paying positions, and it’s impossible to know without looking into their specific qualifications or circumstances. One irony is that employers who use affirmative action to diversify their workforces could be charged with discrimination if they don’t promote minorities who are less qualified at the same rate as others.

There’s also no evidence that Oracle prefers to hire less expensive immigrant labor, though this echoes the views of some in the White House. Most Silicon Valley employers prefer to retain employees they have invested in and hire foreign workers only if they can’t find enough qualified Americans for jobs.

Labor’s lawsuit recalls similar paint-by-numbers attacks by the Obama Administration on auto lenders, Louisiana school vouchers and mortgage lenders. Data can always be massaged for political purposes, but the Supreme Court has ruled that evidence of intent is necessary to prove discrimination, which Labor has not shown.

In a recent legal filing, Oracle notes that Labor is violating its own longstanding regulations by using data acquired in discovery to file new claims. The company also says the government publicly disclosed confidential information to “try this case in the press as a means of exerting pressure on Oracle—perhaps in coordination with private plaintiffs” who are piggybacking on the complaint.

This seems to be a pattern. During Mr. Obama’s final days, Labor also sued Google, which also faces a discrimination class action. When Google defended itself, Labor tried to embarrass the company by declaring “systemic compensation disparities against women pretty much across the entire workforce.” Google continues to fight the government.

Many federal contractors including Palantir and Dell have quietly settled with Labor to avoid being barred from government grants and defamed in legal filings. Credit to Oracle and Google for not folding. One mystery is why Secretary Acosta would continue his predecessor’s depredations that seek to dictate how businesses manage their workforces and rewrite civil-rights and labor law according to the left’s identity politics. Is he running the bureaucracy or getting run over by it?

ET View: Over to the voters of Madhya Pradesh

Swaminathan Aiyar on Market bloodbath: See it as disaster not blessing

The Other Girl in the Kavanaugh Story