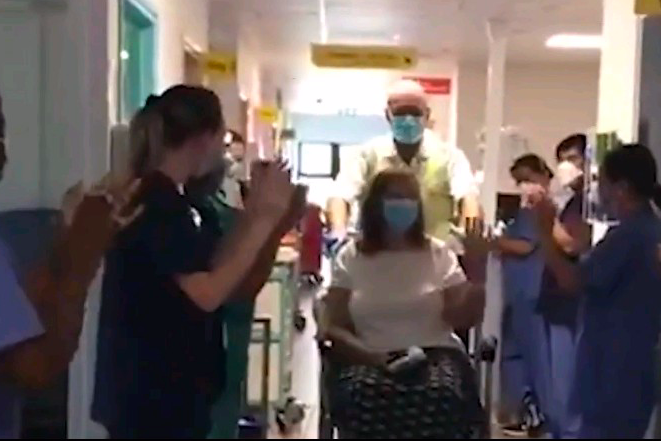 Janice Benham and her husband Philip began feeling ill in mid-March shortly after returning from a holiday to Morocco they had taken to celebrate the 63-year-old being given the all-clear from cancer.

When the couple were struggling to breathe they were taken to King George Hospital in Ilford on March 25. Mr Benham, 65, spent four days recovering on a ward but his wife had to be admitted to intensive care.

Doctors and nurses lined the corridors to clap her out when she was well enough to go home last week.

Mrs Benham, from Havering, said: “It’s lovely to be home with my family. I am a little bit anxious, I know I still have a long road to recovery.”

Mrs Benham, who spent two weeks in intensive care, added: “The staff who looked after me were fantastic. The team on the respiratory ward became like a second family.

“They’d do really nice things and always shared cake with me. Little things like that really made a difference when I was away from my family for so long.”

Mr Benham said: “It hit me like a ton of bricks. It was difficult as I couldn’t come in and see her. The intensive care staff were fantastic and called me every day to keep me updated.”