Europe’s head central banker was less inclined Thursday to interest rate cuts and monetary stimulus than expected, and his tone convinced markets that the Federal Reserve will have a similar stance at its meeting next week.

The outlook now is that the Fed will trim rates by just a quarter percentage point, not a half point, as some had suspected.

The European Central Bank kept rates steady but said it could lower them in coming months, and that it was ready to deliver further stimulative measures. But when ECB President Mario Draghi spoke after the statement, he was dovish but did not provide more details on asset purchases and said the odds were low that the European economy would not head for a recession.

“Draghi made a lot of promises but he didn’t do anything actually,” said Ward McCarthy, chief financial economist at Jefferies. “He came out of the starting gate fast, but the follow-through did not deliver on those expectations. I think the expectation was that he would be more committal than he was. There was an expectation that the ECB was ready to move sooner. This had knock-on effects for expectations for the Fed next week. The thinking is maybe those that were expecting a 50 basis point cut should downgrade those expectations.”

The result was a swift, wild swing in bond markets and the euro, which had skid to a year low, before totally reversing its move to be higher on the day. German 10-year and 30-year bund yields fell to new lows on the ECB statement but reversed sharply while Draghi spoke. The Treasury market went along for the ride, and the U.S. 10-year yield, which influences mortgages and other lending rates, slid to 2.01% and then jumped to as high as 2.1%. 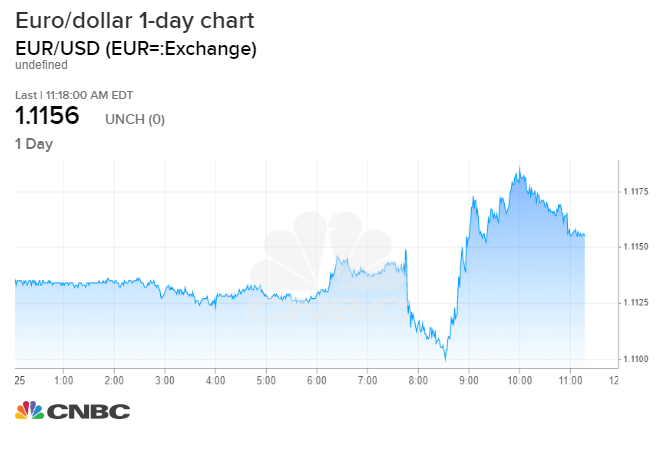 “Everyone was watching the euro, and it swung back and forth,” said Jon Hill, fixed income strategist at BMO. “It’s really on net, a very small move. It’s down 0.1 basis point against the dollar. It seems there were some mixed messages coming out of the ECB, but they certainly teed up additional rate cuts and asset purchases. It looks like they’re aggressively looking in both directions.”

Stocks also fell, and the Dow was off as much 150 points in early trading, and remained under pressure through the trading day.

Andy Brenner at National Alliance said the move in fixed income markets was broad, with spreads narrowing then widening in corporates and high yield.

“This reaffirms our point that the Fed will only go 25,” Brenner said.

“The high-yield index was 16 basis points better. It’s given back half those gains. What you’ve seen is a repricing of the beginning of the Draghi speech to the end of the Draghi speech,” Brenner added. “The beginning of his speech was saying more and more stimulus, saying things are bad— telling you not to invest in Europe, then to the end of the speech where he says they’re going to move more slowly, things aren’t as bad. Draghi said Europe is not in a recession.”

“[Draghi] seems fairly optimistic on the growth side. He said its hard to be gloomy. So maybe there’s a sense they don’t come out with a bazooka,” said John Briggs, head of strategy at NatWest Markets.

READ  Google's travel site now shows you the best time to travel somewhere based on weather, crowds and prices

“We still the risks of recession as being pretty low all in all, and we still see signs of resilience in the labor market, which continues to improve admittedly with lower and lower momentum,” Draghi said at a press briefing following the release of the ECB’s statement.

Marc Chandler, chief market strategist at Bannockburn Global Forex, said the euro’s reversal while Draghi spoke was in part due to a short squeeze, after its low before Draghi’s speech. He said there were a lot of options struck at $1.11 euros and the currency fell to $1.1102.

“Almost every time Draghi talks, the euro has fallen. Everyone has been biased toward a weaker euro,” said Chandler, noting that bias made the reversal dramatic.

Chandler said that Draghi “seals the fate” for a 25 basis point rate cut, but “the market had shifted that way anyway.” Chandler said Draghi sounded not so much hawkish as “defeated.”

“Tomorrow is the seventh-year anniversary of Draghi saying we’ll do ‘whatever it takes,” Chandler said. “I think the ECB is still going to be easing.They didn’t do it this time, but you don’t get the sense of panic. For them, is this an insurance policy? If it’s an insurance policy, do they need QE? Draghi talked about mitigating factors. It was an admission that interest rates will stay negative for a long time. It was an admission that these measures have a diminishing return.”

A zoo experience with a $1,000 price tag is getting rave reviews

US raises tariffs on EU aircraft to 15%