Earnings season sees some big whiffs on Tuesday with McDonalds, UPS and Lockheed

A customer pulls into a McDonald’s restaurant in Shepherdsville, Kentucky.

Generally, profits are topping expectations by a large margin this earnings season, but there were some notable misses on Tuesday.

Some of the largest and most well-known companies in the U.S. — including McDonald’s, UPS and Lockheed Martin — provided financial updates on Tuesday that fell short of what investors and analysts were expecting.

As of last Friday, with 15% of the companies in the S&P 500 reporting results, 84% had posted positive earnings surprises and 64% had reported positive sales surprises, according to FactSet. On Sept. 30, the estimated earnings decline for Q3 2019 was 4%

Attempts by the Golden Arches to lure customers in with promotions failed to gain market share from competitors like Burger King’s parent company and Wendy’s. McDonald’s reported earnings per share of $2.11 versus $2.21 expected, sending shares of the fast-food giant down 4%. The company said U.S. same-store sales grew by 4.8% during the quarter, also short of forecasts of 5.2%. It also missed quarterly earnings estimates for the first time in two years. 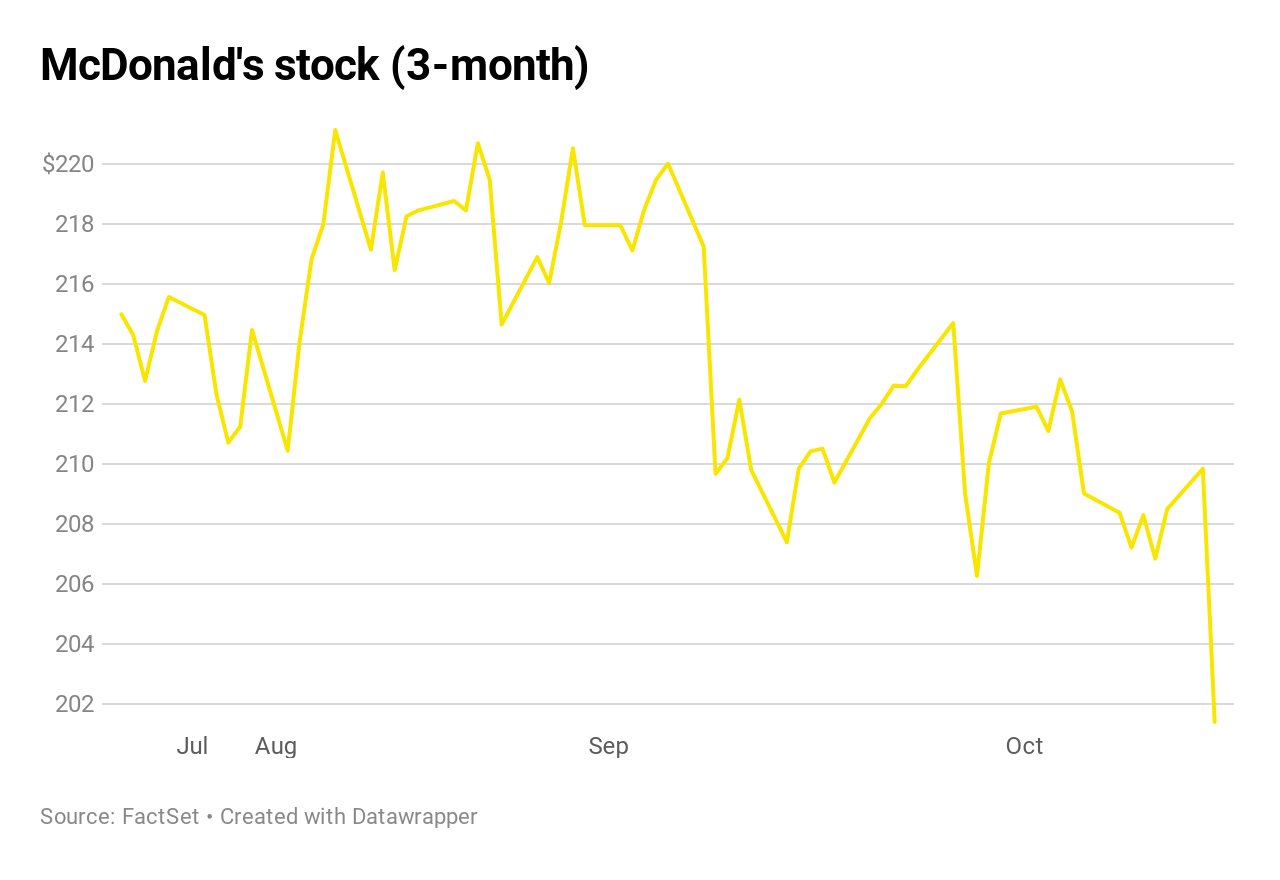 Though the international carrier actually eked out a profit beat in the third quarter, shares of UPS fell nearly 3% after it reported revenues of $18.32 billion, just missing consensus expectations. The company also announced that Chief Operating Officer Jim Barber, who’s had a hand in much of UPS’s global and freight businesses, will retire at the end of December after 35 years at the company. 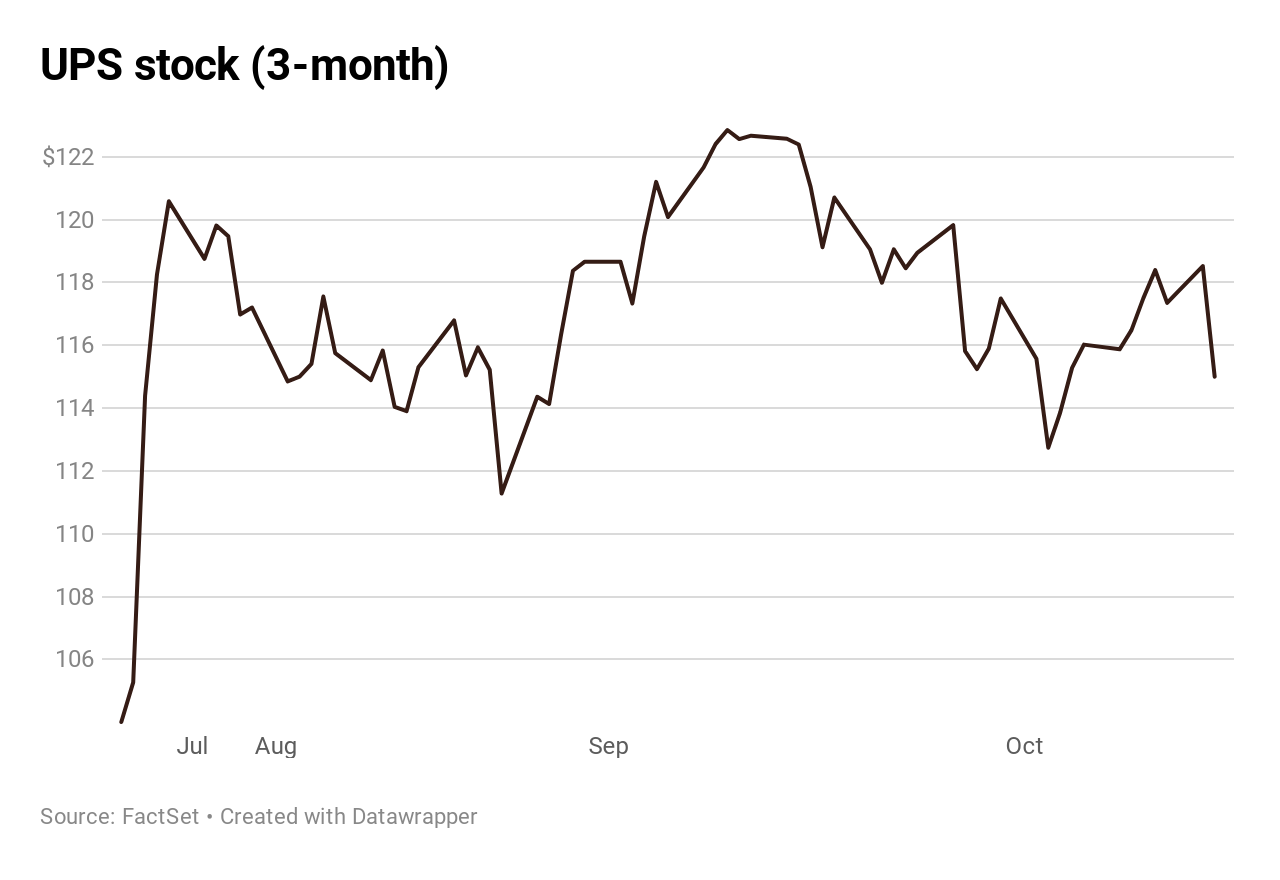 Lockheed Martin stock also came under pressure Tuesday despite strong third-quarter performance from the leading producer of military weapons and missiles. Profit of $5.66 per share came in well above estimates of $5.02 while sales of $15.17 billion easily bested projections of $14.87 billion from Refinitiv.

Investors were unnerved, however, when management said they expect 2020 revenues to grow just 5% to $62 billion. Analysts had forecast Lockheed to guide 2020 sales up north of 6%. The stock fell 0.6% in afternoon trading. 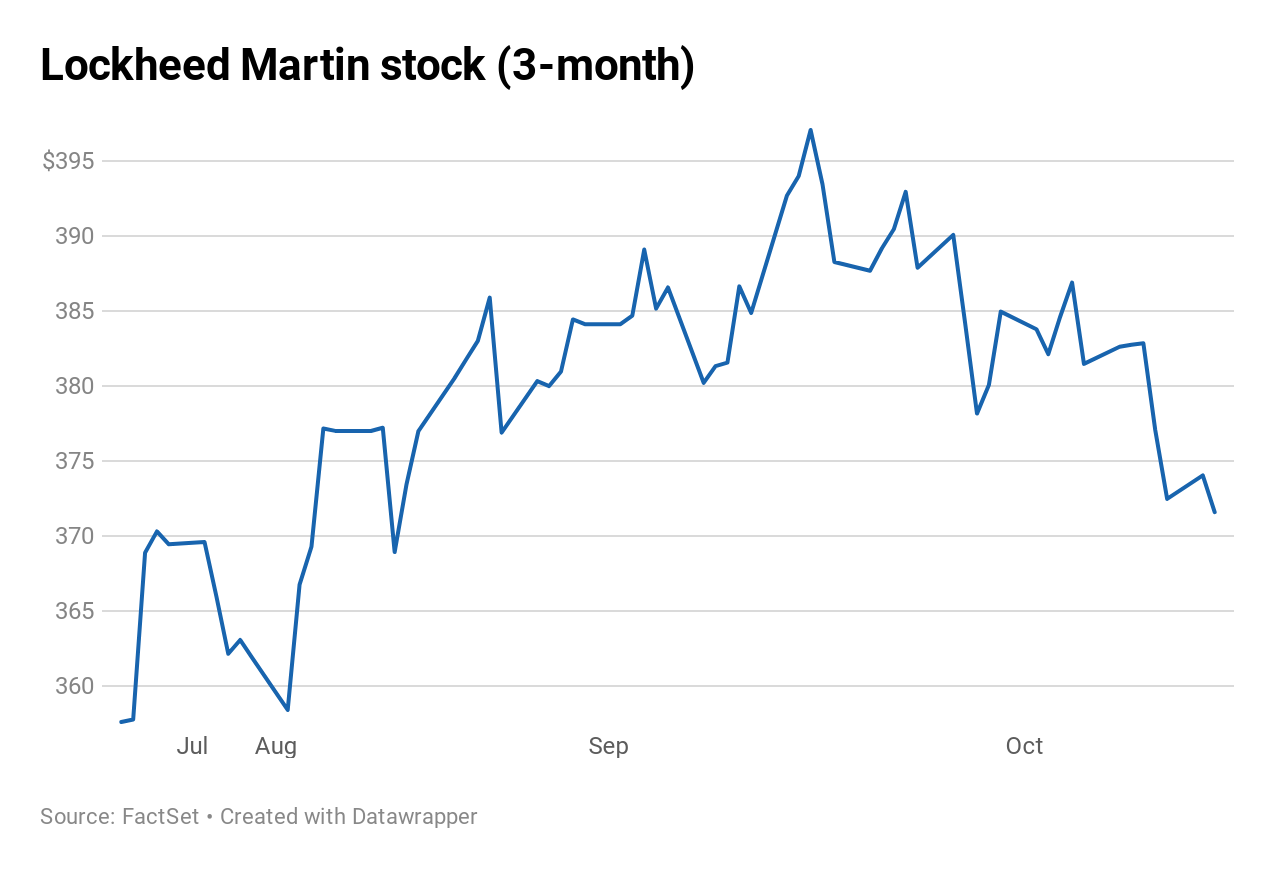 Shares of the insurer sank more than 6% after posting a profit of $1.43 per share, a big miss versus analysts’ expectations of $2.35 earnings per share, according to Refinitiv. The miss was driven by a sharp increase in reserves during the quarter. 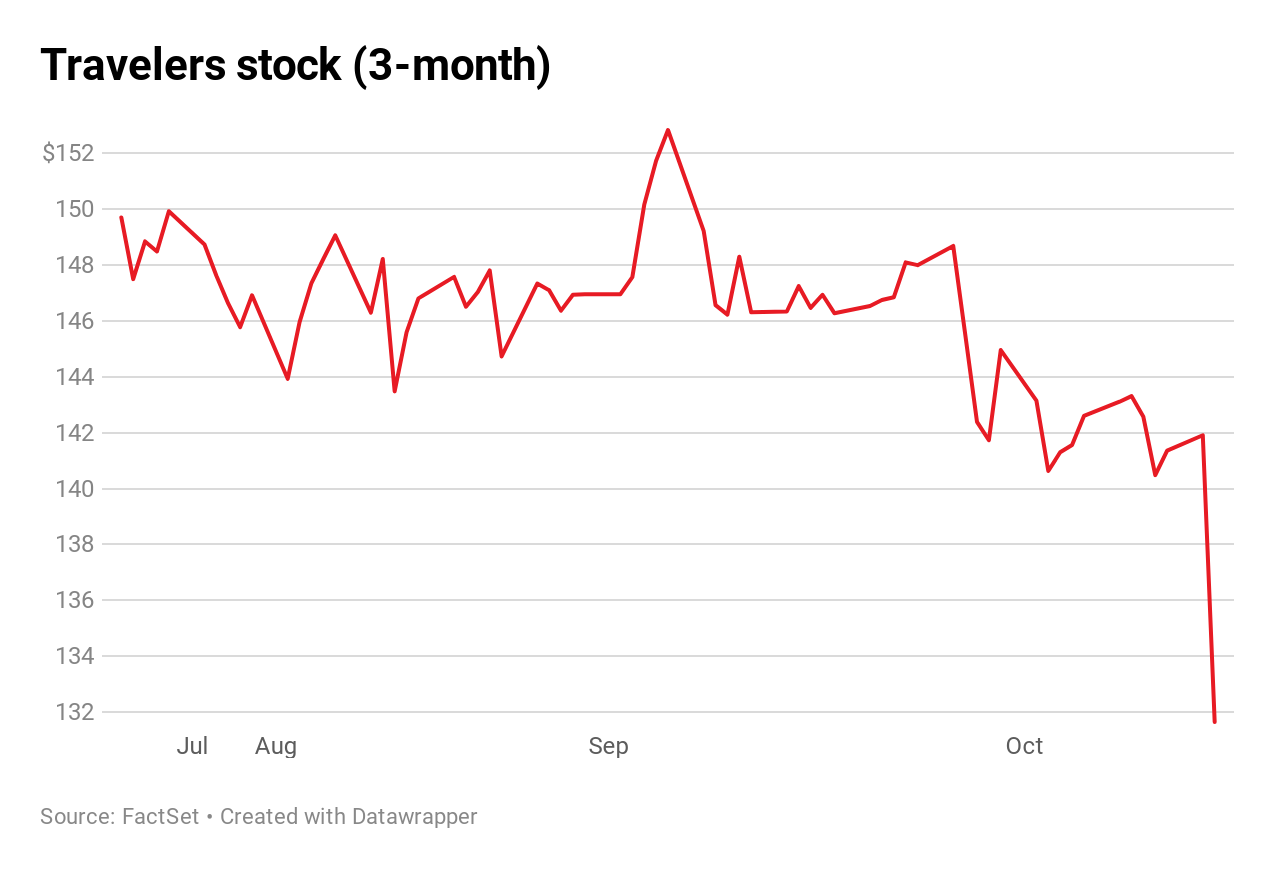 The consumer goods giant bucked the Tuesday earnings report gloom with shares rising more than 3% after it posted quarterly results that topped analyst expectations. Procter & Gamble reported earnings per share of $1.37 versus expectations of $1.24, driven by its beauty, health care and fabric and home care lines, the company said. 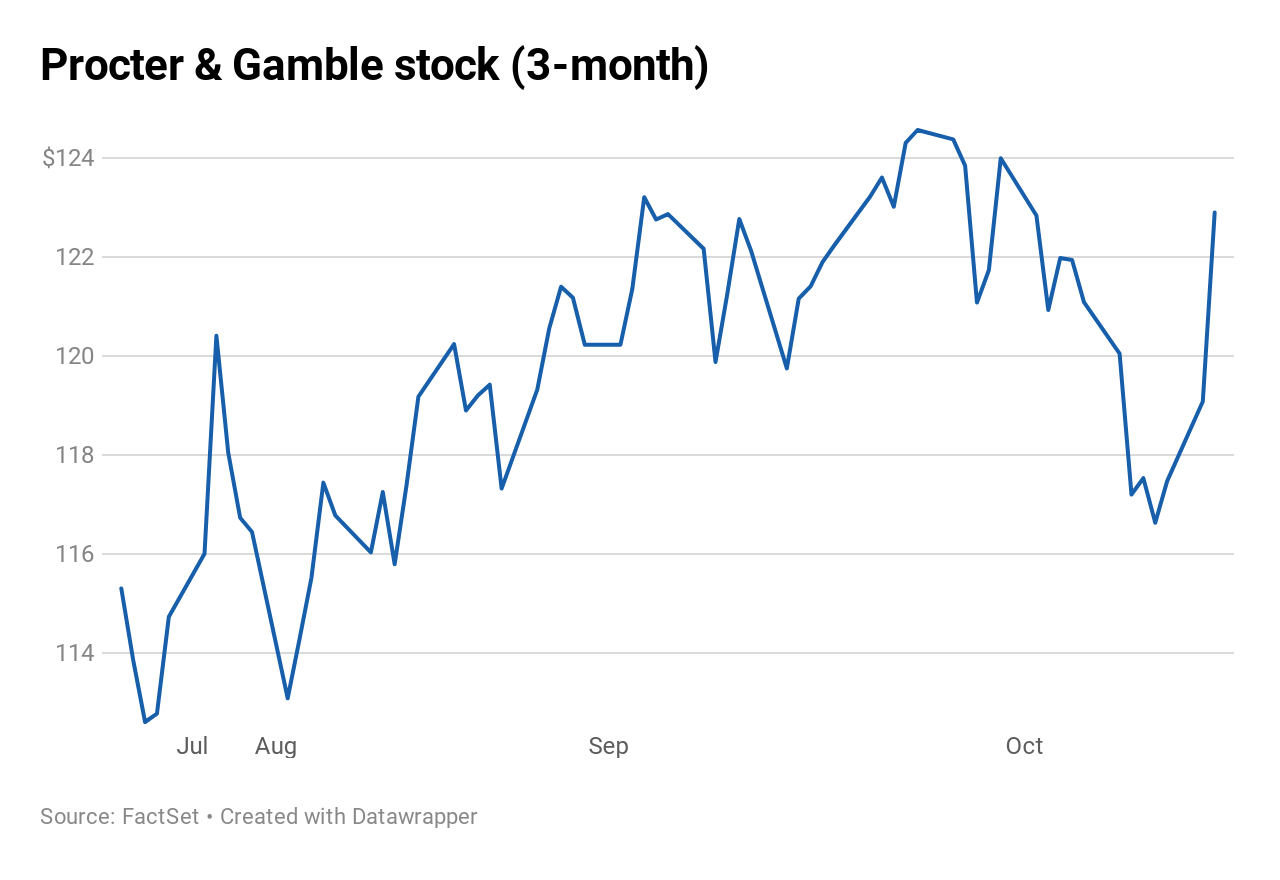 Despite the notable misses, the S&P 500 still managed to inch higher. 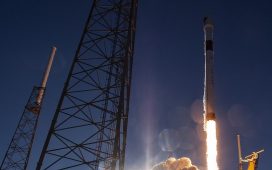