An undated screengrab from the EA game “Apex Legends”. REUTERS/EA/Handout

EA is hoping to reproduce the success of Epic Games’ “Fortnite”, whose blending of “The Hunger Games” and “Minecraft” has been a global hit with teenagers and older gamers over the past two years.

EA disclosed the new number on Monday on Twitter bit.ly/2I3HaHw. “Apex Legends” signed up 10 million players within three days of its launch, EA said last week, a milestone that Fortnite had taken two weeks to reach.

As of Friday, the game was the most viewed on gaming live-streaming network Twitch.

The news comes almost a week after the company lowered its yearly revenue projections following weak sales of its “Battlefield V” title, that had sent its stock plunging 18 percent.

After a 9.6 percent surge on intraday on Monday, the stock ended slightly lower at $97.24.

Rival Activision Blizzard Inc was up nearly 1 percent ahead of its quarterly results, which are due after the bell.

Reporting by Akanksha Rana in Bengaluru; Editing by Saumyadeb Chakrabarty 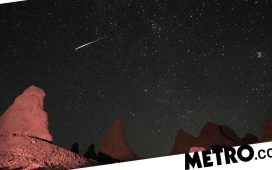