Eco-friendly ‘compost burials’ where human bodies reach 131 degrees Fahrenheit and rot away in just 30 days, are due to launch next year after a successful pilot.

A trial of the process, which saw six dead bodies decompose among wood chips and other material, found that the remains made ‘great worm food’.

It will be the first ‘human composting service’ in the world when it officially launches in Washington state, USA in February 2021.

The process involves placing the body in a ‘vessel’ with wood chips and plant material then rotating it over a month while microbes break down the remains.

Funeral company Recompose developed the process and say it is better for the environment than a traditional funeral and releases a tonne less carbon. 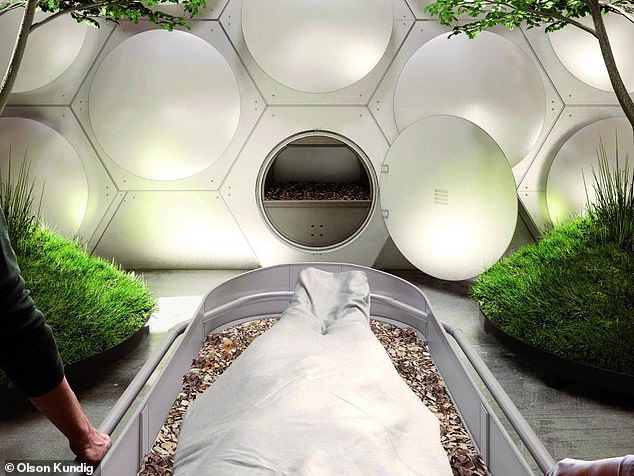 Bodies are placed in a special vessel along with wood chips and plant material, it is then slowly turned to allow microbes to break down the remains over about a month

The pilot experiment involved six volunteers who agreed to be decomposed after death, and was carried out by researchers from Washington State University.

The research team, led by soil scientist Lynne Carpenter Boggs, found that the process breaks down the soft tissue safely and completely over about 30 days.

They found that the process also destroyed the vast majority of disease causing organisms and any pharmaceuticals in the body due to the high temperatures.

They found that it stops more than a tonne of carbon being released into the atmosphere compared to both burials and cremations.

Recompose CEO, Katrina Spade, told the BBC that climate change was a big factor in more than 15,000 people signing up to find out more about the process.

‘The project has moved forward so quickly because of the urgency of climate change and the awareness we have to put it right,’ she said.

The process of ‘recomposing’ involves the body being integrated into the soil by placing it in a closed box with woodchips, alfalfa and grass.

The body, now inside the box, is slowly rotated to allow microbes to break it down over the course of about a month.

At the end the bodies left behind about 2 cubic yards of soil-like material containing bones and a final commercial process would likely reduce the bones to soil as well. 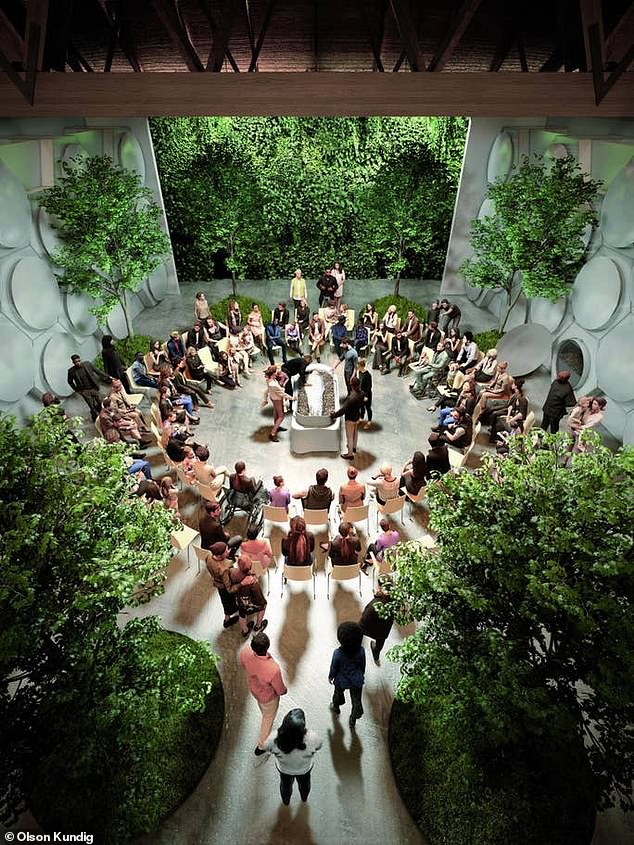 When the process is completed and the remains have become soil they are then available to relatives to scatter on plants or a tree.

Professor Carpenter-Boggs perfected the technique over about four years with funding from Ms Spade and Recompose.

She adapted a process long used for composting livestock to work with human bodies and ensure the resulting soil is environmentally safe.

The six human subjects in her trial were volunteers who had given ‘enthusiastic consent’ before they died but the process still took its toll on the research team.

‘We all kept checking in on each other. My physiology felt different, I wasn’t sleeping well for a few nights, I wasn’t hungry – it was a distress response,’ she told the BBC. 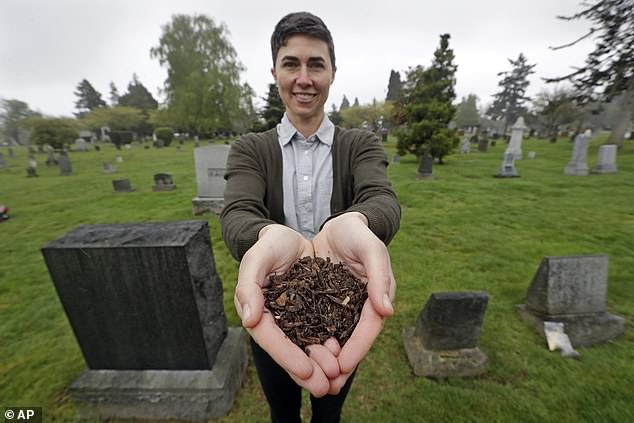 Katrina Spade, the founder and CEO of Recompose, says they hope to start commercial operations in February 2021 in Washington state

Jennifer DeBruyn, an environmental microbiologist at the University of Tennessee, who wasn’t involved in the study, told Science News it was a ‘fabulous option’.

‘The idea of applying it to humans, to me, as an ecologist and someone who has worked in composting, it just makes perfect sense, honestly,’ she said.

Recompose says anyone can sign up for a decomposition burial but it can only happen in Washington state as it’s the only place with legislation allowing natural organic reduction – although Colorado is also considering allowing it.

Ms Spade told the BBC she thinks it is only a matter of time before it is made available more widely – including the UK.

Humans eat more frequently in the presence of 'social foragers'

The Pandemic Is Disrupting Years of Field Science – Slate

Healthy habits extend disease-free life 'by up to a decade'