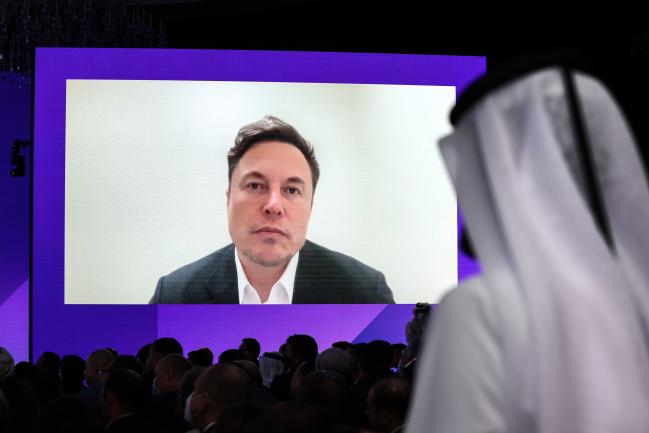 © Bloomberg. Elon Musk, chief executive officer of Tesla Inc., appears via video link during the Qatar Economic Forum in Doha, Qatar, on Tuesday, June 21, 2022. The second annual Qatar Economic Forum convenes global business leaders and heads of state to tackle some of the world’s most pressing challenges, through the lens of the Middle East. Photographer: Christopher Pike/Bloomberg

(Bloomberg) — Elon Musk, the billionaire visionary and oftentimes erratic entrepreneur, struck a sober tone Tuesday as he forecast a probable recession in the US and left doubts about his commitment to a $44 billion takeover of Twitter Inc (NYSE:).

In an interview with Bloomberg News Editor-in-Chief John Micklethwait at the Qatar Economic Forum in Doha, the Tesla (NASDAQ:) Inc. chief executive officer said the electric-car maker’s workforce needs to be trimmed as supply-chain snarls crimp growth. He was also unguarded in his view that the US economy is headed toward contraction. It’s just a question of when.

“A recession is inevitable at some point,” said Musk, who joined the Middle East forum via video linkup from the US in the middle of his night. “As to whether there is a recession in the near term, that is more likely than not.”

Musk, who’s also the CEO of rocket-launch company SpaceX, was far from the jocular and sometimes edgy showman who’s a star on Twitter, with almost 100 million followers. Appearing in front of some of the Qatari backers of his planned acquisition of the social media platform, the billionaire was businesslike, measured and respectful. At 3 a.m. New York time, Musk was dressed in a dark suit jacket and a collared white shirt.

If Musk was unambiguous about his economic views, he left his devotion to one of the year’s most contentious deals — his April agreement to buy Twitter — in doubt.

The world’s richest man said there are “a few unresolved matters” and he’s still waiting for a resolution on how many bots — automated accounts rather than humans — there are on the social media platform. The transaction can’t be completed before that issue is cleared up and shareholders approve the deal, Musk said.

“There’s a limit to what I can say publicly,” he said. “It is somewhat of a sensitive matter.”

Musk’s reluctance, or inability, to fully endorse the deal won’t dispel speculation that he’s using the bot issue to potentially blow up the transaction. Musk has said he wanted to put the takeover “on hold” while he investigated how many of Twitter’s users are real people. He has filed a formal letter with the Securities and Exchange Commission in which he told Twitter executives he might walk away from the deal if the company didn’t do more to prove the size of its user base.

With the US economy poised to go into reverse, Musk acknowledged it’s time to slow Tesla’s expansion in some areas. He provided clarity on the Austin, Texas-based electric-car company’s job cuts, confirming the salaried workforce will be reduced by about 10% over the next three months, resulting in an overall reduction of around 3.5% in total headcount. Hourly staff numbers are still expected to grow, Musk said.

“We grew very fast on the salaried side and we grew a little too fast in some areas,” he said in the interview.

Musk, who has an estimated personal fortune of $206 billion, wasn’t all gloom and doom.

He laid out a far-reaching ambition to sign up half the world’s population to Twitter if his acquisition goes through. That’s even greater than his vision to get to 1 billion users, which he outlined to Twitter staff last week. The platform currently has about 229 million users.

Musk told the forum he would focus on “driving the product” at Twitter though he doesn’t necessarily plan to be the CEO if he buys the company.

The billionaire has emerged as a potential political force, and said last week he voted Republican for the first time in the primary election in Texas. Musk has also indicated that he’s leaning toward Florida Governor Ron DeSantis, who has positioned himself as a staunch conservative and heir apparent to former US president Donald Trump.

Still, in the interview in Doha, Musk refused to be drawn on his political allegiances ahead of the presidential election.

“I’m undecided at this point,” he said, when specifically asked whether he’d back Trump. Musk did say, though, that he’s willing to put a “non-trivial” amount of as much as $25 million in a super PAC.

“They’re extremely competitive, hardworking, and smart,” he said, adding that consumers can probably expect to see even more China-made products flowing from the world’s manufacturing powerhouse than there are now.

The audience also got a glimpse of Musk the futurist. A Tesla team is working to have a prototype humanoid robot ready by the end of September, he said.

Asked about cryptocurrencies, Musk rebuffed a suggestion that he himself had said people should invest. But he pledged to support , the cryptocurrency created as a joke in 2013, because some of his employees have asked him to.

SpaceX and Tesla, for example, did buy some , “but it’s a small percentage of our total cash and near-cash assets,” Musk said. “I also bought some Dogecoin and Tesla accepts Dogecoin for some merchandise, and SpaceX will do the same.”

“And I intend to personally support Dogecoin because I just know a lot of people who are not that wealthy who, you know, have encouraged me to buy and support Dogecoin.”

Qatar’s Ministry of Commerce and Industry, Qatar Investment Authority and Investment Promotion Agency Qatar are the underwriters of the Qatar Economic Forum, Powered by Bloomberg. Media City Qatar is the host organization.