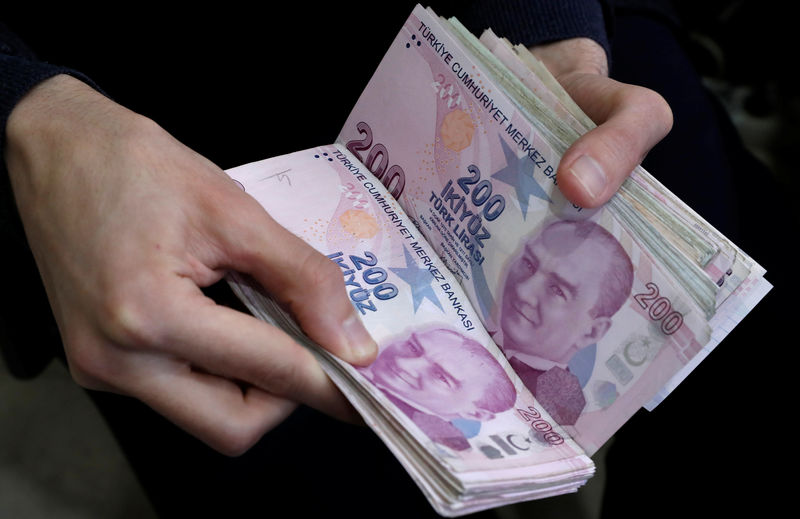 © Reuters. A merchant counts Turkish lira banknotes at the Grand Bazaar in Istanbul

LONDON (Reuters) – Investment banks are now earning more from trading emerging-market currencies than from the major G10 markets, as wild swings in the likes of the Turkish lira contrast with relative calm in the dollar, euro and yen.

Disappointing earnings at the trading divisions of investment banks like Goldman Sachs (NYSE:) underscore the slowdown in trading revenues, including forex revenue.

The slowdown is particularly acute in G10 currencies: the U.S., Australian, Canadian and New Zealand dollars, the euro, yen, Swiss franc, sterling and the Swedish and Norwegian crowns.

Coalition data go back only to 2010, but Coalition’s head of research, George Kuznetsov, said that before 2010 emerging-market revenues would always have been lower than revenue from trading the major currencies.

For an interactive link to the graphic : https://tmsnrt.rs/2VMckWo

“In 2019, I would expect relatively similar [revenues], but it will be difficult to exceed 2018 levels,” he said. Trading in G10 currencies was likely to rely on “one-off” volatility, he said.

Emerging-market forex revenue in 2018 was the third highest since at least 2010, according to Coalition; G10 revenues were second worst. Foreign exchange revenue overall topped $16.3 billion in 2018, the fourth worst year in nine, Coalition said.

Forex earnings are being squeezed by declines in trading volumes and volatility. Banks wring more money from volatile markets, as clients trade more. But currency volatility has plummeted to five-year lows as major central banks, from the United States to New Zealand, turned dovish.

“There doesn’t appear to be a major direction (in G10 markets) at the moment, and volumes are down,” said a senior foreign exchange trader at a European bank. “It feels very competitive. People are fighting for market share.”

The growing role of expensive automated trading systems in G10 markets has suppressed already wafer-thin margins. Less liquid emerging-market currencies, on the other hand, often can be traded on the phone, making profits higher.

Policy expectations for the Federal Reserve have “solidified for the medium term”, keeping the dollar in a range, said Valentijn van Nieuwenhuijzen, CIO at Dutch investment house NN Investment Partners. “But emerging markets offer opportunities and we are seeing pockets of value.”

Weakness in FX revenue is reflected across banks’ broader fixed-income businesses, although increased volatility in emerging markets does not tend to create extra revenue in other asset classes, such as credit.

Goldman Sachs on Monday reported a first-quarter slide in revenue of 13 percent, with the biggest drop coming in the bank’s trading business. JPMorgan (NYSE:) and Citigroup (NYSE:) also reported declines in trading revenue, of 10 percent and 6 percent, respectively.

Russia shares lower at close of trade; MOEX Russia down 0.28%

Another top-10 Unilever shareholder to vote against Dutch shift