Even with the major U.S. indices near all-time highs, a growing number of investors and fund managers have a clear preference for emerging markets while shunning domestic equities. In today’s report I’ll make the case that, as with most overcrowded trades, investors’ bet that emerging markets will outperform in 2019 isn’t likely to pay off. Instead, the odds favor U.S. stocks outperforming their EM counterparts in the months ahead.

Although fund managers have recently increased their exposure to equities, most of their recent allocations have been to defensive-oriented sectors such as utilities. By contrast, their collective exposure to global bank stocks is lowest it has been in almost three years, according to BofAML. But here is where things get interesting. According to the report, along with holding cash, fund managers prefer emerging markets over the U.S. and the eurozone.

Indeed, there has been a revival of interest in emerging market [EM] stocks in just the last few weeks. Commenting on recent inflows into EM funds, Tim Shirata of Guild Investment Manage observed:

Year-to-date, as of this writing, total inflows to emerging-market equity ETFs are up 6.2%; in the past 12 months, they are up 8.5% over the preceding 12-month period. Hedge funds are also increasingly long emerging-market currencies, but have not reached ‘stretched’ levels.”

In view of the fact that the iShares MSCI Emerging Markets ETF (EEM) has only managed a 50% retracement of its losses since last year, it’s insightful that emerging markets are given such preference by many investors. While the S&P 500 Index (SPX) is just below an all-time high and riding a wave of momentum since late December, emerging market stocks still have a lot of overhead resistance to contend with. That is, the supply that was dumped onto the market throughout 2018 hasn’t yet been fully absorbed, which means EM stocks will likely have a tougher time making headway in the coming months. By comparison, the U.S. equity market as represented by the SPX has far less resistance to contend with and, assuming a new all-time high is made soon, the U.S. market will have a far easier time making additional headway due to the lack of overhead supply.

Another problem that many emerging market investors must contend with is the tendency for retail investors to sell whenever a previous benchmark high is reached in the EEM. For instance, those who bought emerging market stocks during last year’s decline and held on until now will be tempted to sell once the break-even point is reached since many investors are afraid to tempt fate by being “greedy” and holding in the hope of making an actual profit. This is one reason why, when markets have experienced a huge decline, it typically takes a much longer time to recover from the losses than it took for the market to decline.

Shown below is a graph comparing the 2-year performance of the EEM with the SPX. As you can see, U.S. stocks are in a clear-cut relative strength position versus emerging markets stocks. From this perspective, it makes you wonder why anyone would favor emerging markets over U.S. equities right now. Yet, investors have been conditioned to think of the emerging markets as offering long-term value since their collective industrial and economic development potential is supposedly far greater than that of the U.S. What they fail to consider, however, is that the long-term stability of the U.S. economy is a far greater stimulus to equity market gains than the development potential of EM countries. 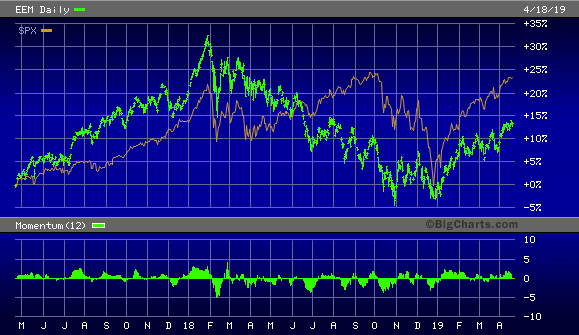 My remarks should not be interpreted to mean that I’m bearish on the emerging markets for 2019. Rather, the point I’m emphasizing is that the U.S. stock market is likely to outperform the emerging markets in the coming months. Moreover, I consider U.S. equities to be a far safer bet than emerging market investments in the intermediate-term (3-9 month) outlook.

Aside from technical and sentiment considerations, another reason why the U.S. stock market should outperform in the coming months is that earnings expectations are so low for U.S. companies that it has become extremely easy for these expectations to be exceeded. With the latest earnings season now underway, 83% of S&P 500 companies that have reported Q1 earnings to date have shown a positive EPS surprise, while 59% have reported a positive revenue surprise, according to FactSet. Investors should accordingly expect to see many more positive earnings surprises in the coming weeks.

The internal condition of the NYSE broad market also remains constructive for stocks to rally on positive earnings surprises. Shown here is the 4-week rate of change in the 52-week highs and lows on the Big Board. The new highs and lows is my favorite measure of incremental demand for equities, and it’s also an excellent way to see whether or not there is any internal selling pressure in the market and where it’s taking place. Right now there is no discernible selling pressure in the NYSE since the number of stocks making new 52-week lows remains below average. 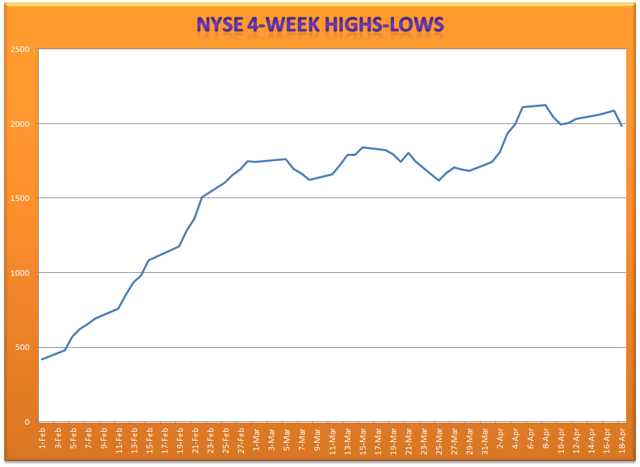 The Nasdaq, however, is showing some above-normal selling pressure in the healthcare sector. Most of the damage in recent weeks has been inflicted in the pharmaceutical and biotech stocks listed on the Nasdaq. Shown here is the 4-week rate of change (momentum) for the Nasdaq highs and lows. Until this indicator shows improvement, I recommend avoiding the temptation to buy the beaten-down drug and biotech stocks. Ideally, the 52-week lows on the Nasdaq should shrink to below 40 for several days in a row to let us know that the danger has passed. Right now, internal selling pressure is still too high in the tech sector to safely justify initiating new long positions in Nasdaq stocks. 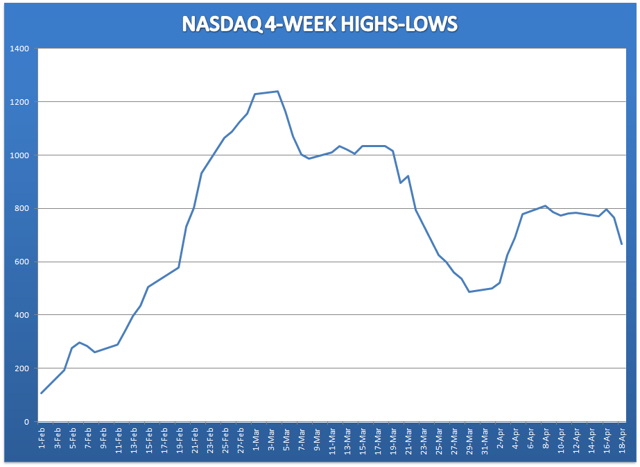 Despite the weakness apparent in the healthcare sector right now, I don’t expect this to be sufficient to derail the overall bull market in U.S. equities. NYSE stocks are in a relative strength position versus the Nasdaq and in a position to outperform in the coming months based on fundamental and technical reasons, as discussed in recent reports. Investors should continue to focus their attention on U.S. equities in attractive sectors (some of which are mentioned below). They should also avoid the increasingly over-crowded trade of being long emerging market stocks while being underweight the outperforming U.S. stock market.

On a strategic note, traders can maintain a long position in my favorite market-tracking ETF, the Invesco S&P 500 Quality ETF (SPHQ). I suggest raising the stop-loss to slightly under the $31.70 level for this ETF trading position on an intraday basis. Only if this level is violated, will I move to a cash position in my short-term trading portfolio. Meanwhile, investors can maintain longer-term positions in fundamentally sound stocks in the top-performing real estate, consumer staples and financial sectors.

Disclosure: I am/we are long SPHQ, XLE, XLF. I wrote this article myself, and it expresses my own opinions. I am not receiving compensation for it (other than from Seeking Alpha). I have no business relationship with any company whose stock is mentioned in this article.

Nintendo is launching a coral pink Switch Lite in Japan

Join the innovators in enterprise AI at Transform 2020

2020 Is Set to Be a Big Year for Facebook’s Cryptocurrency and Messaging Efforts...