An unnamed FCoin employee has been alleged of intentionally destroying $75 million worth of FCoin Token (FT) belonging to the cryptocurrency project’s team members.

Popular Chinese commentator, by the name Molly, first made the allegation quoting a reliable source statement.

She said one of FCoin employees “get mad at FCoin” and destroyed all the FT held by the team. Molly maintained that the unnamed employee deleted the database of FCoin in the process.

FCoin just getting more and more ridiculous. Before there was rumors says it get hacked , but FCoin denied it.. pic.twitter.com/GZ2gvctBT3

However, in a response to the community, the FCoin team says it has decided to permanently destroyed all FT held by the FCoin team.

While the team did not state the reasons behind the destruction, the update maintained that the decision was made after the team destroyed 5,044,114,837.92336501 FCoin Token a year ago due to the first referendum of the FCoin Community.

The decision to destroy the token shocked the FCoin community as no update regarding the decision was communicated before the action was taken. Before FCoin shared the update, there was widespread rumor it got hacked as well. 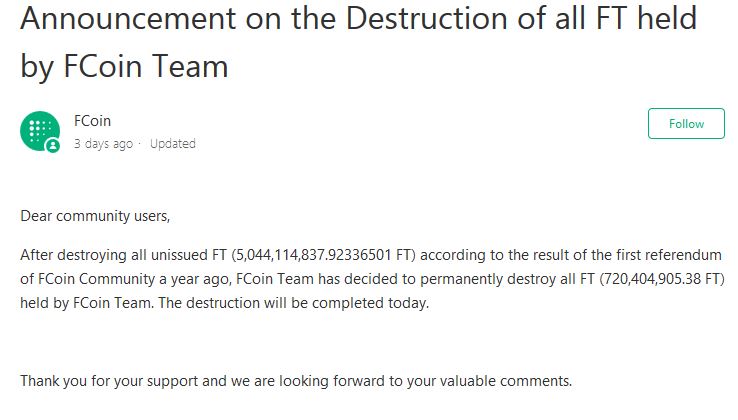 FCoin is a native token of the FCoin Exchange. The cryptocurrency exchange was in the past accused of trading volume manipulation.

In 2018, the Ethereum network was brought to a standstill due to FCOIN Exchange voting activities. The newly launched exchange at that time surprised the crypto community with its drastic effect on the network.

READ  What is an STO (Security Token Offering)? - The Cryptocurrency Analytics

Afterward, the Singapore-based exchange claimed to have $ 7 billion USD in daily volume, raising more suspicion that both the voting process and trading volume were manipulated to call people’s attention to a cooked glory.

As well, in the same line, 51% of the FCoin Token supply is locked up and can only be unlocked through trading. In FCoin whitepaper, the idea was called “Transaction-fee mining” or “Trans-mining.”

A Reddit user once accused FCoin of heavy manipulation in every move by the digital currency. The user said at FCoin Token’s current price, “it is impossible to acquire enough FT to gain enough daily rewards to offset risk.”

He said, “You pay transaction fees to the platform with BTC and ETH.”

“Then the platform pays ‘100%’ back to you with its token. Isn’t it just buying platform token with BTC and ETH? How is this different from an ICO?”

On Weibo at some point, the CEO of Binance also said:

If an exchange doesn’t get revenue from transaction fees and solely profits from the price of its token. How would it survive without manipulating the token price? Are you sure you want to play against a price manipulator? The same price manipulator who controls the trading platform?