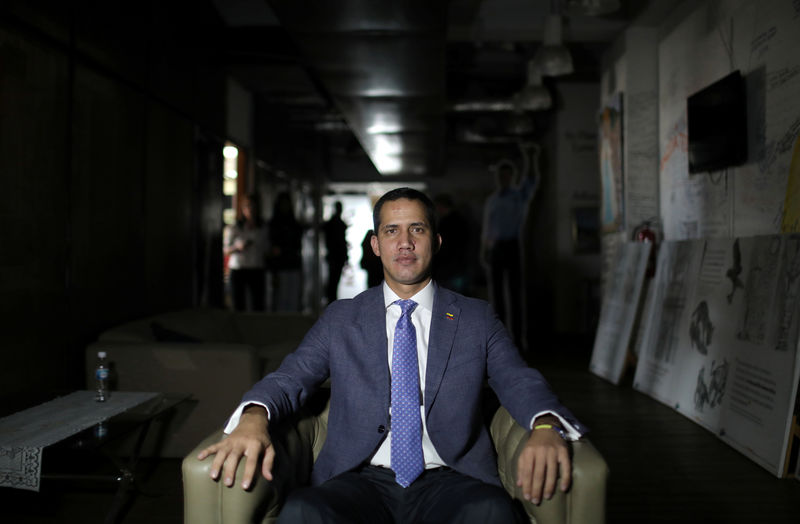 © Reuters. Venezuelan opposition leader Guaido, who many nations have recognized as the country’s rightful interim ruler, poses for picture after an interview with Reuters in Caracas

CARACAS (Reuters) – The United States should help Venezuela keep control over U.S. refiner Citgo by preventing its seizure by creditors seeking to collect on unpaid Venezuelan debts, opposition leader Juan Guaido said in an interview with Reuters on Wednesday.

Venezuela’s opposition is pushing to remove President Nicolas Maduro amid a catastrophic economic collapse that has created a humanitarian crisis. It also wants to protect overseas assets that it says will be crucial for a future economic recovery after Maduro leaves office.

Guaido, who invoked the constitution in January to assume the interim presidency after declaring Maduro’s 2018 re-election a fraud, said a U.S. executive order protecting Citgo from seizure was the best option to keep the refiner in Venezuelan hands.

“That would be ideal for Venezuela. It should be decided in a sovereign manner by the United States,” he said at the headquarters of opposition party Popular Will in Caracas. “We are looking to follow that path, given the institutional fragility of Venezuela, which is living through a dictatorship.”

“Our objective is to protect the nation’s assets, (which is necessary) because of irresponsible borrowing,” said Guaido, who heads the opposition-run legislature.

Houston-based Citgo, a subsidiary of Venezuelan state oil firm PDVSA, is the country’s most important overseas asset. It is the eighth-largest U.S. refiner, with a 750,000 barrel-per-day refining network supplying 4% of America’s fuel.

The United States, along with nearly 50 countries around the world, calls Guaido Venezuela’s legitimate leader and has thrown its support behind him in efforts to push Maduro from power.

Washington has levied several rounds of sanctions that have crippled Venezuela’s capacity to borrow abroad and hobbled its vital oil industry by restricting crude sales to the United States.

But the White House has not issued an executive order protecting Citgo from creditors. Washington carried out a similar measure for Iraqi assets following the U.S. invasion of that nation in 2003.

The White House did not immediately respond to a request for comment.

An ad-hoc board of PDVSA, made up of Guaido allies, made a $71 million interest payment this month on the company’s 2020 bond, which is backed by Citgo shares.

The move was criticized by some opposition sympathizers on the grounds that Venezuela is likely to lose Citgo anyway. The same bond has a $913 million payment due in October that most believe the ad-hoc board will not have the resources to pay.

Venezuela’s inflation has topped 1 million percent, fuelling malnutrition and disease. Millions of Venezuelans have fled what was once a bustling economy.

Maduro, who blames the country’s economic problems on U.S. sanctions, calls Guaido a puppet of the United States and has said he should “face justice.”

Guaido has called on the military to end the crisis by turning on Maduro and helping to create a transition government that can call free and fair elections.

But the military has been slow to respond.

A small group of officers, along with Guaido, led street protests on April 30, urging the armed forces to rise up against Maduro. But the effort collapsed when the bulk of Venezuela’s military stood by the ruling Socialist Party.

Guaido said change was being blocked by fear among military officers over taking the first step, as well as by the extensive presence of Cuban intelligence agents who conduct surveillance operations.

“What is preventing a transition? That there is a dictatorship, that there is persecution of military officers that does not allow for direct interaction between them,” he said. “Cuba’s interference is notorious.”

Cuba has sent thousands of doctors to support Venezuela’s health service. Venezuela’s opposition, defecting military officers and Washington officials have also said Cuba provides intelligence services to prop up Maduro’s administration. That is denied by the Venezuelan and Cuban governments.